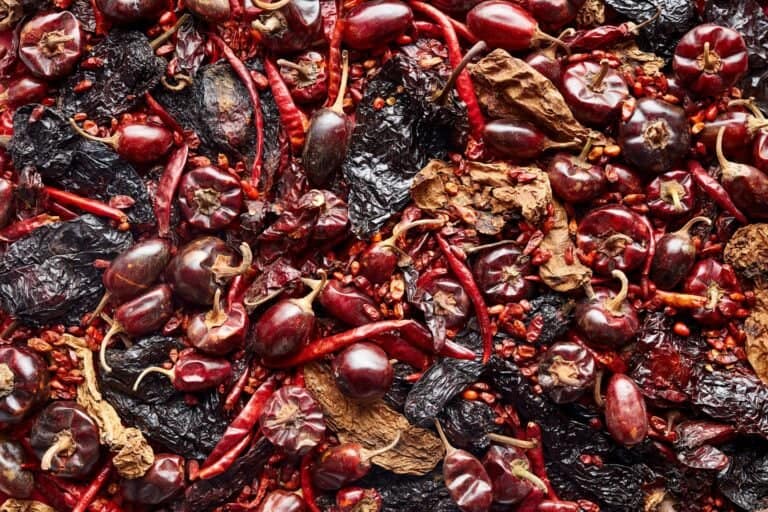 If you’re a regular here at Salt & Wind Travel, then you know all things Mexico is our thing — food especially.

When we aren’t eating and sipping our way through its culinary capitals like Oaxaca (where we lead small, curated trips) and Puebla, we keep the Mexico love alive in our own kitchens.

The key is keeping our pantry stocked with a handful of classic Mexican ingredients that make an appearance in a lot of Mexican dishes.

Nearly everything on this list is accessible here in the States from your nearest Latin market, specialty grocer, or online.

Take a look below for our list of Mexican pantry staples as well as suggestions for traditional Mexican food recipes (as well as a few Mexican-inspired ones too):

Since avocados are native to Mexico and go way back to Aztec times it makes sense that they’re ubiquitous in Mexican food. Find avocado topped on all manner of Mexican dishes, blended into licuados or batidos (smoothies), and served in salads, soups, desserts, and more.

And of course, avocados are necessary for guacamole, an Aztec dish that has become synonymous with Mexican food. The name guacamole is an interpretation of the Nahuatl word ahuacamolli or “avocado sauce.”

No Mexican pantry is complete without beans — with pinto and black beans being the most ubiquitous. Beans are eaten at all times of the day as an accompaniment to virtually every meal, from spooning black or pinto beans out of a pot (frijoles de olla) to topping off tacos and serving as glue for all of sopes toppings.

They are versatile and taste best when prepared from their dried state — though we know time can get the best of us, so using canned beans works too.

Chiles of all spice levels are essential to Mexican cooking whether fresh, dried, roasted, or smoked. Mexico cultivates more than 60 varieties of chiles, from plump jalapeños to slender, spicier green serranos from Puebla and Hidalgo states, to the even spicier globe-like orange habanero chiles found throughout the Yucatan peninsula. Chipotles en adobo are dried and smoked jalapeños (moritas) in a pool of tangy vinegar and tomato-based sauce.

Try them in our Chicken Tinga Tostadas or use them in salsa to lend it more depth. Find them in cans at Latin markets or the International foods aisle at other grocery stores.

When it comes to the world of Mexican cooking an overwhelming number of dishes include masa—cooked corn dough that’s been nixtamalized, or soaked in a lime mineral bath—in some form. From tortillas (with the exception of northern Mexico where flour tortillas are more common) to tamales and huaraches, masa is a must-have Mexican pantry staple.

Vegetable oils may be the go-to cooking fat in many kitchens, and lard is essential for the Mexican pantry. The rendered pork fat is used in everything from refried beans and tamales, to carnitas and bizcochos (sweets like pastries and cookies.) The Spanish introduced pigs to Mexico in the 1500s, and Catholic nuns who were influential in Mexican cuisine frequently used lard in their kitchens.

Though lard tends to be pricier than vegetable oils, reach for a bit of lard if you’re looking to impart lots of flavor to your dishes or are after a fluffy or crispy texture.

Citrus cooks and flavors all sorts of Mexican dishes. For example, Seville oranges are a key ingredient to cochinita pibil in Yucatán, and in Oaxaca, cut-up grapefruit with a sprinkle of chile powder is a common snack sold on the street.

However lime is the most ubiquitous citrus fruit used in Mexican cooking. Cook ceviche or aguachile with its acid, brighten up guacamole, and squirt a wedge over a snack of roasted peanuts aka cacahuates Oaxaqueños as you’ll find throughout most of southern Mexico, including Oaxaca.

Nopales are cactus paddles from the prickly pear cactus. Once dethorned they’re eaten raw such as in a salad with tomatoes and onions (ensalada de nopales), cooked with eggs for breakfast (or huevos con nopales), and as a filling for tacos or topping for the oblong-shaped tlacoyos. Its magenta-hued fruit is also edible and typically used to make colonche, a low abv beverage.

Find nopales sliced and stored in cans and jars at grocery stores, or sold whole in the produce section at Latin markets. Pro tip: Boil sliced raw cactus paddles for 20 minutes to remove the slimy texture. Nopal comes from the word nopalli in the Aztec language, Nahuatl. It’s said that the location of their capital Tenochtitlan was built when the god Huitzilopochtli told them to build where they saw an eagle on a cactus, eating a snake—maybe you’ve recognized this image on the Mexican flag.

Pepitas (And Other Seeds And Nuts)

Mexican cooking often calls for a variety of seeds and nuts and pepitas, or pumpkin seeds are no exception. They’re used to thicken moles and pipián sauces, roasted and eaten as a snack, and folded into sweets like fudgy jamoncillos. They’re also used in salsas, soups, and drinks. Pepitas are hulled to reveal a thin skin, olive color, and taste mild and sweet.

Use pepitas in Chile And Cocoa Spiced Snack Mix Recipe

Rice is such a central ingredient in Mexican cooking that it makes an appearance from breakfast to dessert (like arroz con leche, a sweet rice pudding) and drinks like creamy yet dairy-free horchata. Though long-grain and short-grain rice are both used, short-grain rice is more common in home cooking. The Spanish introduced rice in the 1500s, who were introduced to it by North African Moors centuries prior. The Spanish word “arroz” is actually an interpretation of the Arabic word “ar-ruzz.”

While red tomatoes are a typical pantry staple for everything from Italian to Californian cuisine, green husked tomatillos are a go-to if you’re looking to stock a Mexican-inspired pantry.

Tomatillos, which are native to Mexico and Central America are more tart and dense and you’ve likely had them before in salsa verde or chili verde. Brothy pozole (or posole) verde — a specialty of Mexico’s Pacific coastal state, Guerrero — also calls for tomatillos (and a good helping of lime) as part of its stew base. Prepare tomatillos by peeling off the husks, then either blend them raw into salsa or roast before blending.

In Mexican cooking, vinegar acts as a preservative for pickled vegetables like escabeche—made with jalapeños—and a flavor enhancer to salsas, salads, and marinades. Pineapple vinegar is common in Oaxaca and in Yucatán, many traditional dishes are served with a side of pickled onions, like cochinita pibil for example.

History suggests vinegar likely made its way to Mexico by the Spanish who learned how to preserve meat in vinegar from the Moors and maybe ceviche’s original inspiration.

Dairy is a relative newcomer when you consider Mexico’s long culinary history. The Spanish brought cows (as well as pigs, horses, sheep, and goats) to Mexico and as such introduced dairying and ranching to the region. These days cheese is an essential ingredient in Mexican food.

Go-to cheeses include Cotija, an aged cow’s milk cheese that’s hard and crumbly, queso fresco, and the dairy product crema which is similar to sour cream but less tart and is great to have on hand for all kinds of Mexican dishes.

For example, use mild, crumbly queso fresco to sprinkle on chilaquiles, huevos rancheros or enchiladas. Cotija works in these instances too but you likely won’t need as much since its long aging process gives it a tangier flavor. Drizzle crema as a finisher for soups and stews or any other dish you think could use a flavor boost.

To round out your Mexican pantry, reach for fresh and dried herbs. Fresh herbs include cilantro, mint, and epazote if you can find it stateside. Epazote is endemic to Central America and is typically used to flavor beans and stews. Dried herbs like bay leaf and Mexican oregano (which is punchier than its Mediterranean counterpart) are also smart to have stocked.

For example, use Mexican oregano in our recipe for Rajas de Chile Poblano, or charred poblano peppers. Quintonil is a wild green herb common in Oaxacan cooking.

As for spices, look for cumin; allspice for seasoning pastes, seed-based sauces, as well as cakes and cookies; Canela (cinnamon, specifically the warmer and milder Ceylon cinnamon); and achiote paste.

Achiote paste is made from ground-up annatto seeds which give the paste its red-orange color, cumin, coriander, oregano, pepper, and cloves and used throughout Oaxaca and Yucatán. It is essential to Yucatán’s cochinita pibil dish.

Use achiote in Orange, Arugula, and Beet Salad with Achiote Dressing Recipe

On the sweeter side, piloncillo is unrefined cane sugar and used to sweeten everything from drinks to desserts like the shredded coconut-based cocadas. Find piloncillo in little conical shapes in Latin markets.

Another flavoring to know is chamoy made from apricots (and sometimes mango or plums), lime, and dried chilies for a distinctly sweet, spicy, and savory kick to fresh fruit. And don’t forget the more delicate Mexican vanilla extract—just make sure ingredients read “vanilla bean” as quality varies such as with many agricultural products like olive oil and wine.

All that said, the world of Mexican food is vast and complex but these items are a solid entry point for making a variety of classic and Mexican-inspired dishes at home.