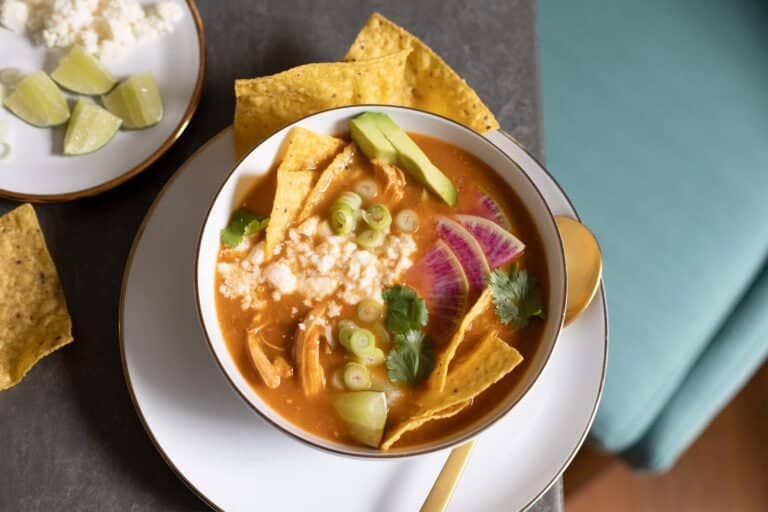 Without a doubt, one of the best-known classic Mexican dishes is tortilla soup.

Whether you’ve ordered it at your local TexMex joint or tasted it the last time you traveled to Mexico, you’ve likely had it yourself. It’s no surprise because classic tortilla soup has origins that date back to Aztec times so, to say it’s been around a minute is an understatement.

Like the chicken soup of Mexico, Chicken Tortilla Soup is comforting, healthy, and in that, there are as many versions as there are abuelitas.

What we know is that we love ours blended rather than soupy — even if it makes some of our food friends crinkle their nose in disapproval — and we like to mix it up, garnishing not only with the more traditional toppings of tortilla strips, avocado, and cheese but also with fresh radishes, scallions, and wedges of lime.

Before we share our recipe for creamy chicken tortilla soup, here is some background on this classic Mexican soup.

What Are The Classic Mexican Soups?

First of all, you may be surprised to learn that tortilla soup is a rather old-school recipe and is considered one of the classic Mexican soups along with Sopa De Fideo, Sopa Poblana, and Sopa De Elote — many of which come from the central part of Mexico.

So, Where Does Tortilla Soup Come From?

Authentic chicken tortilla soup–also known as Sopa Azteca or Aztec soup–is a recipe that supposedly, as the name suggests, dates back to Aztec times. It’s believed that the origin of Mexican chicken tortilla soup is from central Mexico, likely from areas where corn has been grown for millennia–we’re talking Mexico City or the nearby region of Tlaxcala. The most basic (and classic) version of the soup is believed to be a chili-and-tomato-laced chicken broth that’s served with crispy fresh-fried tortilla strips.

Okay, Then How Do You Make Chicken Tortilla Soup From Scratch?

Making authentic chicken tortilla soup is actually pretty simple. Some recipes have you make a soup base with dried chilis and chicken broth, while others add tomatoes to that. You then simmer it with some onions, garlic, and herbs and serve that with all the toppings!

To make creamy chicken tortilla soup, you take that broth and whir it in a blender or food processor until it’s really smooth, then serve that with the chicken and all the other delicious toppings.

Got It. But How Do You Make Tortilla Soup Thicker?

I’ve seen all sorts of tricks for thickening soups throughout the years, and many of them are pretty bizarre, in my opinion. Blame it on me, having studied at a French culinary school, but I believe that you should reduce or simmer a broth most of the time to thicken it instead of doing anything else.

One major exception is chili and chicken tortilla soup, where we add fine cornmeal to thicken it. I know it seems a little strange if you haven’t done it before, but the result is that the soup flavor is more complex, and it has a natural, slightly thickened result. The trick is to simmer the soup with the cornmeal a bit–ideally 10 to 20 minutes–until the cornmeal swells up and absorbs the liquid.

Oh, and if you don’t have cornmeal, you can add in 3 to 4 corn tortillas or a couple of handfuls of crushed-up tortilla chips and get similar results.

Good Side Dishes To Serve With Tortilla Soup

Pretty much any reason at all — game night, Monday Night Football party, wintry weather, or you’re just fighting a cold and you can’t eat any more chicken noodle soup — is in our book, a good reason to make chicken tortilla soup. And, of course, each of those occasions might call for a different side to serve with the soup.

In general, we turn to healthy but filling salads to serve along with it like a Classic Caesar Salad, our Grilled Avocado Salad With Green Goddess Dressing, this Los Cabos Summer Salad, this Grilled Mexican Corn Panzanella if it’s grilling season, or this Salt-Roasted Beet and Orange Arugula Salad With Achiote Dressing And Toasted Seeds.

See The Recipe Made Step By Step

Heads up that Aida made this recipe on her IGTV, so head there to check it out!

Classic tortilla soup is like the chicken soup of Mexico in that it's comforting, healthy, and in that there are as many versions as there are abuelitas. This {Sopa De Tortilla} Creamy Chicken Tortilla Soup recipe version is blended rather than soupy and topped with avocado, radishes, scallions, toasted chilies, and, of course, lots and lots of crisp tortilla strips.
No ratings yet
Print Recipe Pin Recipe
Prep Time 15 mins
Total Time 1 hr
Course Dinner, Soup
Cuisine Mexican
Servings 6 Servings