The Best City To Travel To Based On Your Food Personality 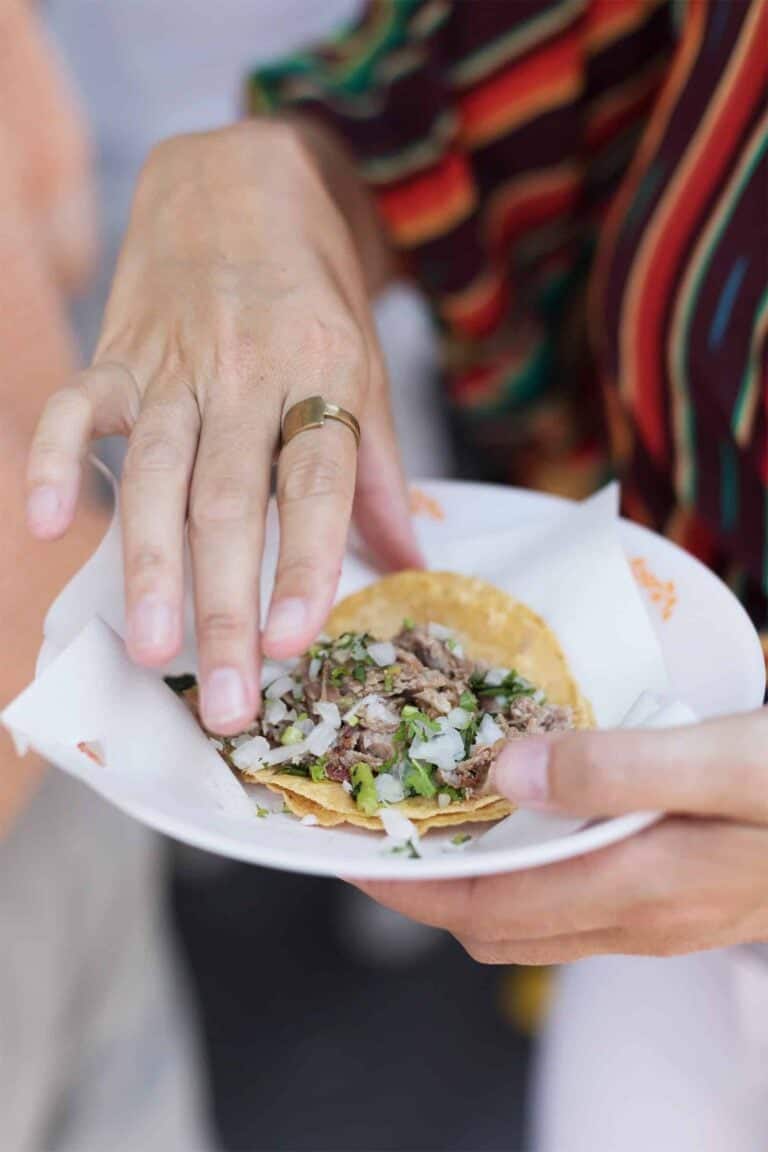 A city might strike your interest for its museums, parks, or even its weather — admittedly, it’s rarely one single element that draws you to a new place.

But, to us, a great city is defined by a combination of its people, its landscape, and of course: its food!

When we think of street food, the image that comes to mind is a hot griddle and a cold drink. Mexico is known for its open-air markets and food stands, and (thanks to mezcal lovers and chefs alike) Oaxaca has been unofficially crowned their classic foodie capital.

We could spend days maneuvering the zocalos (aka town squares) and still not put a dent into the assortment of street food from aguas frescas (with flavors like tamarind and passion fruit), to moles, tacos, and tlayudas.

Ask any food-loving Mexican (aka most any Mexican) and they’ll likely name Mexico City and Tijuana as the best places in the country for tacos. We’re partial to Tijuana because, while Mexico City has an unparalleled Mexican street food scene, Tijuana gets very serious about all things tacos.

Heck, there’s even a taco alley in the city where you can go to try all things taco. Here’s a list of the classic Mexican tacos, many of which you can find not just in Tijuana but in the stalls of taco alley!

Dining alfresco requires little more than a temperate climate so pretty much any city on or near the Mediterranean is likely to offer both the weather and the vista. But the South of France tops our list when it comes to relaxed, summery outdoor dining.

We tend to stick to the restaurants with the best views for pre-dinner drinks and then uncover an unsuspecting street for the family-owned cafes that cook for the locals. And if you’re like us, never skip the rillettes!

No surprise for anyone who loves Chef’s Table: Copenhagen is king when it comes to modernist cooking. With summer days that last all night and bone-chilling winters, it’s no surprise that when produce is at its peak, it’s celebrated. It is certainly out of creative necessity, but not with a lack of passion, that Danish cuisine has defined modern cooking in recent years.

Their creativity in foraging stems from the influence of Rene Redzepi’s Noma, and trickles down as his staff branches out on their own with highbrow experiences from the likes of Amass and elegant, coffee concepts like Atelier September.

You can’t talk “farm-to-table” without paying homage to Northern California’s influence (where Alice Waters is so revered she might as well be knighted).

The favorable growing conditions and a passionate population have laid the groundwork for nearly every type of farm. And one of our favorite NorCal communities in Mendocino County.

Tuck into an elegant meal with an oceanside setting and 100% local and organic catch at Wild Fish in Philo. Take home a gallon of fresh-pressed juice from the Philo Apple Farm. Or scoot down to neighboring Healdsburg and taste the fruit of the labor at Barndiva, whose Mendocino farm provides seasonal bounty.

If Northern California gave us “farm-to-table, then Southern California gets a nod for their “health food” movement. With beach weather all year long and celebrity culture, it’s easy to see why the community revolves around looking and feeling great.

That’s why we turn to Santa Monica for the tastiest plant-based dining on the planet. The Santa Monica Farmer’s Market has been a driving force in the community for 35 years and counting when it comes to all things local, sustainable, and organic.

Head there early morning and you’ll see the top local chefs shopping for that day’s menu. When it comes to eating, some of our favorite spots are True Food Kitchen, Café Gratitude, Rustic Canyon, and nearby Plant Food and Wine for meals that you wouldn’t even realize are entirely plant-based.

For Cocktails For Dinner: Tokyo, Japan

Tokyo is like a cocktail onion: you could continuously peel one layer back to find yet another, but we find that it’s best to experience it all at once and with an open mind. That’s why we choose Tokyo as the best city for “cocktails for dinner.”

This is the mother of the “city that doesn’t sleep,” with unforeseen nights laid before you in the folds of hidden karaoke bars, dizzying skyscrapers, and underground cocktail bars without menus. If we had to choose, we might select something with green chartreuse at Bar High Five or the cocktail tasting menu at Bar Gen Yamamoto.

Although small, don’t let Tel Aviv fool you: this young city is brimming with global influence. For something casual and healthy, there’s vegan-ified Middle Eastern at Meshek Barzilay. Restaurant Dalida brings it with flavors that are familiar but creatively combined (Spicy Feta Brulee Dip, anyone).

And there’s the trendy Abraxas North (aka Tzfon Abraxas), where celeb chef Eyal Shani puts on a performance every night, grilling lamb on an open fire, thin-slicing tomato carpaccio, and charring cauliflower, all while singing and dancing. Be prepared to start happy hour early and party late into the wee hours be it at the restaurants or one of the city’s clubs or speakeasies.

If we say chocolate, you likely think of Switzerland, but our hearts go straight to Europe’s original chocolate capital: Turin.

The chocolate history here runs deep (as in centuries) and it’s taken seriously (many pastry shops roast and blend cacao beans to make their own chocolate) so Turin is where to travel in Italy if you are chocolate obsessed.

If you like to sip your chocolate, then the bicerin—layered chocolate, espresso, cream combo—is a must, which we get at the namesake Caffe al Bicerin. And Turin is also home to one of the most famous chocolate spreads out there: gianduia (the chocolate and hazelnut paste most widely marketed under the Nutella label) that we love best from Peyrano or Guido Gobino.

Bologna is such a noteworthy city that it has not one but three nicknames: La Dotta (“the learned one”- for its university); La Grassa (“the fat one”- for its cuisine); and La Rossa (“the red one”- a reference to the red rooftops throughout the city).

As home to some of Italy’s most famous foods – tortellini en brodo, tagliatelle, lasagna, and mortadella – a trip to Bologna is high on most food lovers’ travel lists. Here is a list of all the foods you must eat when you travel to Bologna but at the top of our list? All things pasta!

The energy is palpable when you travel to Barcelona and dinner usually begins with a late meal that leads into an even longer night.

Most restaurants serve dinner from 9 PM to midnight, which leaves plenty of time for pre-dinner drinks. Fortified wine (as in vermouth and sherry) is on-trend so we might start the night with a glass at Entrepanes Diaz before settling into a meal.

It’s hard to go wrong in this city where El Bulli alum cooks on every corner, but a few favorites are Bar Mut, or the newcomer, Palo Cortao. Somewhere in there, we make time for a gigantic Gin and Tonic (Xix Bar makes some of our faves), and, of course, it isn’t truly a late night in Barcelona until you’ve stayed up ’til sunrise to nosh some churros and chocolate.

Yes, you can find tapas all across Spain but we’d argue none are more creative than those in San Sebastian. This capital of Spain’s Basque Country has a mix of sea and land and a mix of Spanish and Basque flavors in its cooking, which makes for a unique mix of cooking that’s among some of the best in the world.

Don’t believe us? Well, Michelin agrees with us because it has the most Michelin stars per capita of any city on earth. But the thing we think you must do when you travel to San Sebastian? To take part in a traditional tapas (aka pintxos in Basque) crawl.

For Coffee All Day: Melbourne, Australia

We would be remiss not to include coffee on this list, as it deserves it basically its own food group in our minds. No one has reimagined the “coffee shop” more than Australia these days, and Melbourne takes the cake. Market Lane Coffee (with multiple locations) is one of our favorite roasters and shops, with lovely monochromatic details throughout.

And if you do desire a fantastic coffee paired with fantastic food, The Kettle Black is one of the hottest tickets in town, producing “black bun” burgers and topping chia pudding with a rainbow of flowers and fruits.

What about you? What is the best city to travel to for your food personality?

Hayley was born in Charleston, South Carolina and resides in Venice, California with her husband, Jesse. They are opening their very first, tiny restaurant together in Venice Beach in 2016.
Posts By This Author →

Hayley was born in Charleston, South Carolina and resides in Venice, California with her husband, Jesse. They are opening their very first, tiny restaurant together in Venice Beach in 2016.
View Posts By This Author →