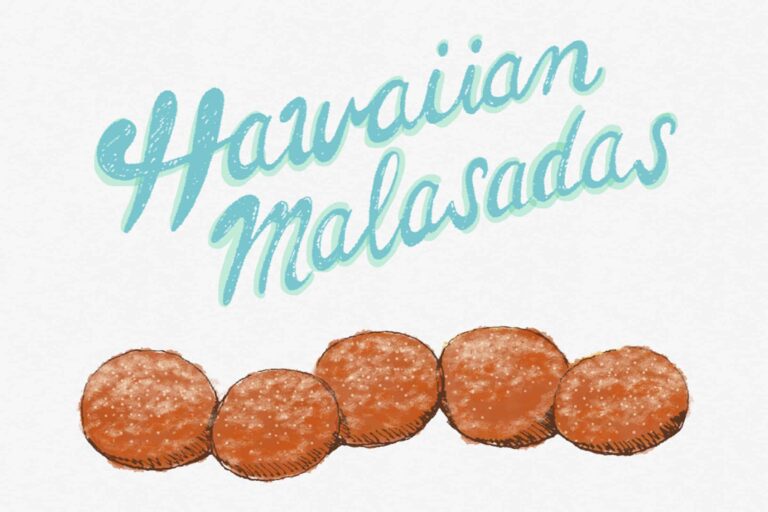 Donuts are not my thing. I know, I probably just lost major food cred with you but hear me out. It’s so hard to make a good donut — freshly fried, airy, sweet but not too — that I’ve only come across a few that I really truly love (I’m talking to you, Sidecar Donuts!).

But, when it comes to malasadas aka the fried donut treats you find all over Hawaii? Well, then I’m an equal-opportunity eater. Okay, I still want them freshly fried and well made but there’s something about eating a malasada that’s just so Hawaii to me that I can’t say no. Which is ironic because they’re actually not even from Hawaii.

When you travel to Hawaii,there’s a lot of amazing contemporary food but you gotta also pay homage to the classic local foods (poke, boiled peanuts, saimin). But if you only try one of those classic local foods, you gotta make sure to indulge in malasadas. So, next time you head to Hawaii, promise me you’ll have at least a dozen all on your own.

Here’s everything you need to know about a malasada — as in what makes a good malasada and where to find the best malasadas in Hawaii:

So, What Is A Malasada?

Okay, yes, technically a malasada is a donut but that’s like calling a Ferrari a car — really just not the whole story.

The malasada is a yeasted donut but it a is distinct from other yeasted donuts in a few specific ways. First, a malasada has no hole; second, it’s relatively “eggy” in flavor; third, evaporated milk is used; and fourth, they have an-ever so slightly crisp exterior. Finally, they’re usually — but not always — coated in sugar.

From there the variations are endless especially when it comes to fillings. In Hawaii, you’ll find tropical-flavored custards such as haupia (coconut), lilikoi (passionfruit), guava, or pineapple. Macadamia or classic flavors like vanilla and chocolate are also common.Note that malasada purists will argue that you should only eat them “plain” (aka unfilled).

And then there’s the coating. At their most basic, malasadas are rolled in sugar but you can also find versions rolled in cinnamon sugar, or the most extreme coating IMO,the sweet-salty-tangy li hing mui (salty dried plum) powder.

The History Of The Malasada Donut

The malasada hails from Portugal and was brought to Hawaii when Portuguese immigrants flocked to Hawaii to work the plantations in the 19th century.

Originally, malasadas were really only made for special occasions and they were especially associated with the Lent holiday. These days malsadas are everywhere and we have Leonard Rego to thank for that.

Back in 1952, Leonard opened Leonard’s Bakery on Kapahulu Street in Honolulu, and, seeing as he was of Portuguese descent, he decided to sell malasadas. From the start the malasadas were a huge success. In fact, they were so popular, they’ve been frying them up fresh at Leonard’s ever since. To this day, Leonard’s has lines from opening to closing.

Where To Get The Best Malasada Donuts In Hawaii

You’ll come across malasadas at a ton of places across the islands, so, to narrow your search, you should ask locals for their favorites. You want them to be freshly fried and, as a general rule, a place that specialize in malasadas make them best.

I’m partial to the haupia custard-filled one from Leonard’s, but here are a few other favorites across the state.

Got any other malasada spots you love in Hawaii? Let us know in the comments below!