Recipes To Celebrate The World Cup 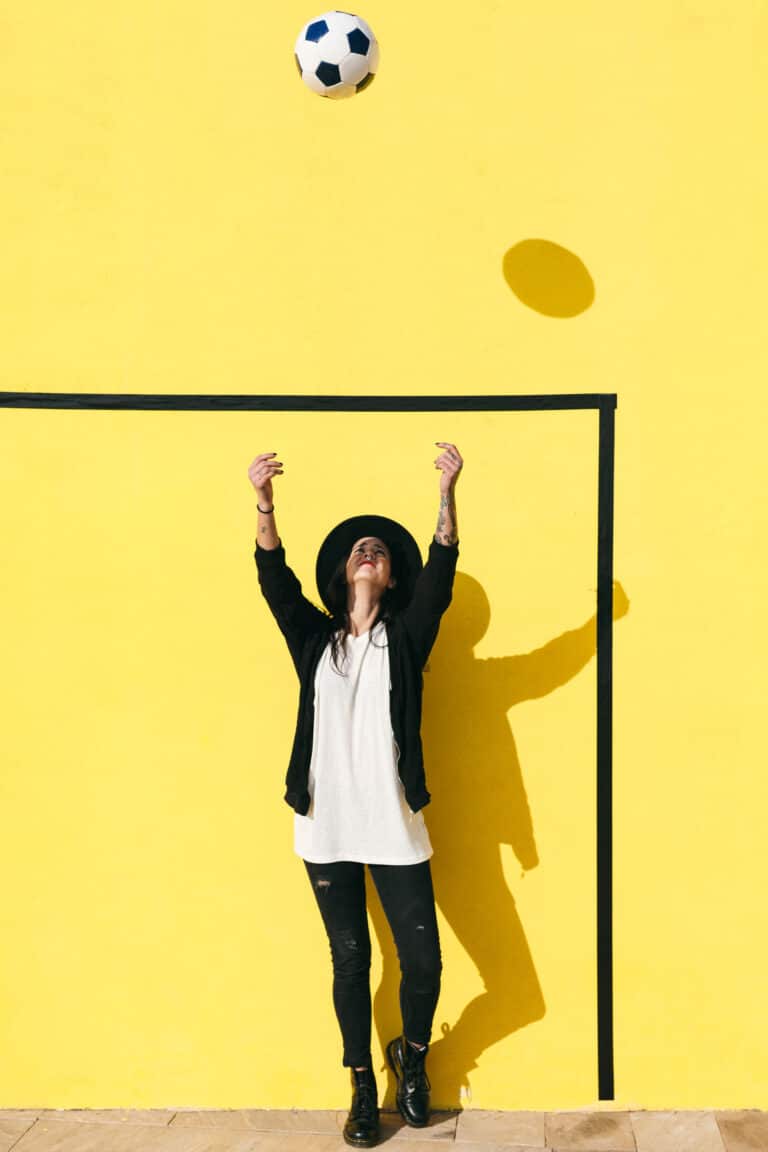 Two of the main reasons we love food are a) it’s a crib sheet to a culture’s personality, and b) it unites people from different walks of life.

Many of us on Team Salt & Wind are former athletes, so, after chatting about the 2018 FIFA World Cup, we realized sports often do the same thing!

To get into the spirit for this year’s World Cup (starting June 14 in Russia), we’re celebrating the teams that made the tournament. For us, that celebration comes back to food, so we gathered recipes inspired by the countries playing, all of which would be perfect for a World Cup viewing party!

Depending on your time zone you may have to wake up early to catch a match, so we’ve got recipes for all your World Cup party food needs from breakfast to happy hour to dinner. Your game plan should be to invite friends over and serve these super shareable recipes while you cheer on your favorite team.

Even if you don’t have a team to root for, these recipes are, in our opinion, very much worth celebrating! 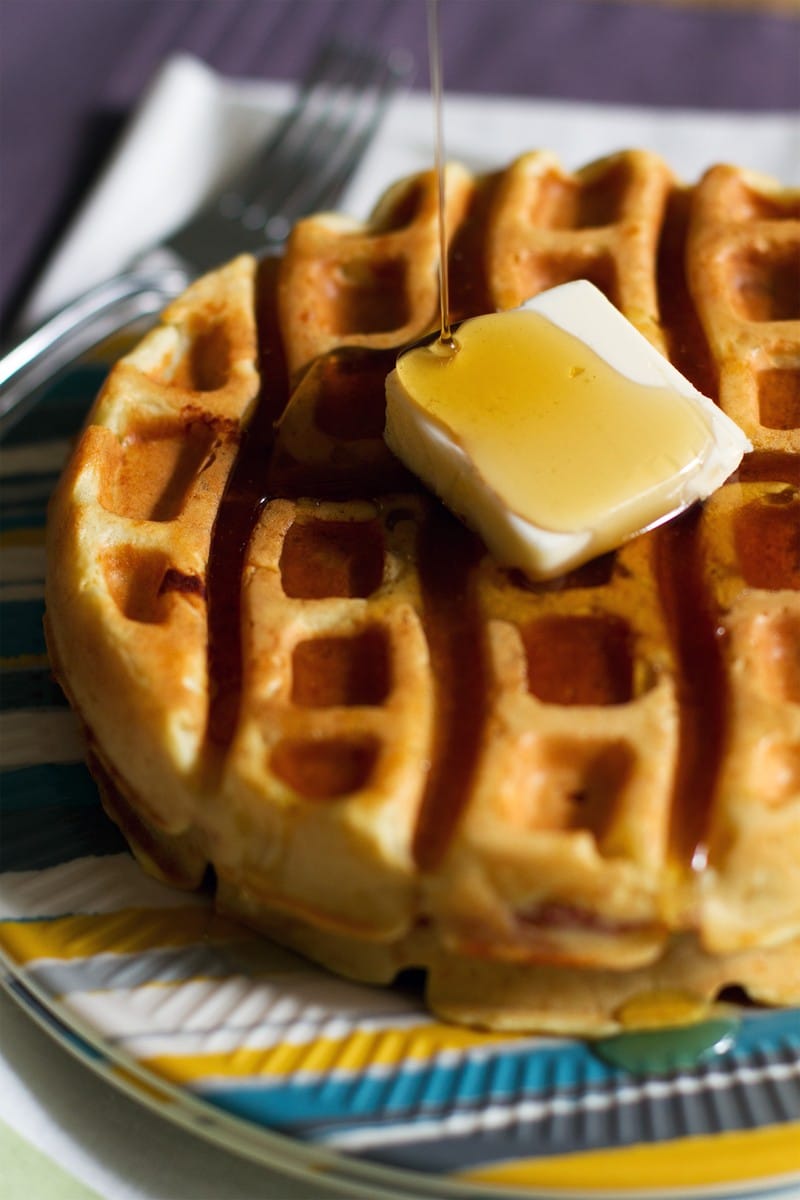 How to kick off the day in Belgium? With waffles, of course! Belgium’s got a decent shot at winning the 2018 World Cup so you should celebrate with some good ol’ fashioned waffles. True, these Prosciutto Parmesan Savory Waffles aren’t super traditional but we love the sweet-salty combo.

By the way: anyone else think of Gossip Girls’ Rufus Humphrey at the thought of waffles? 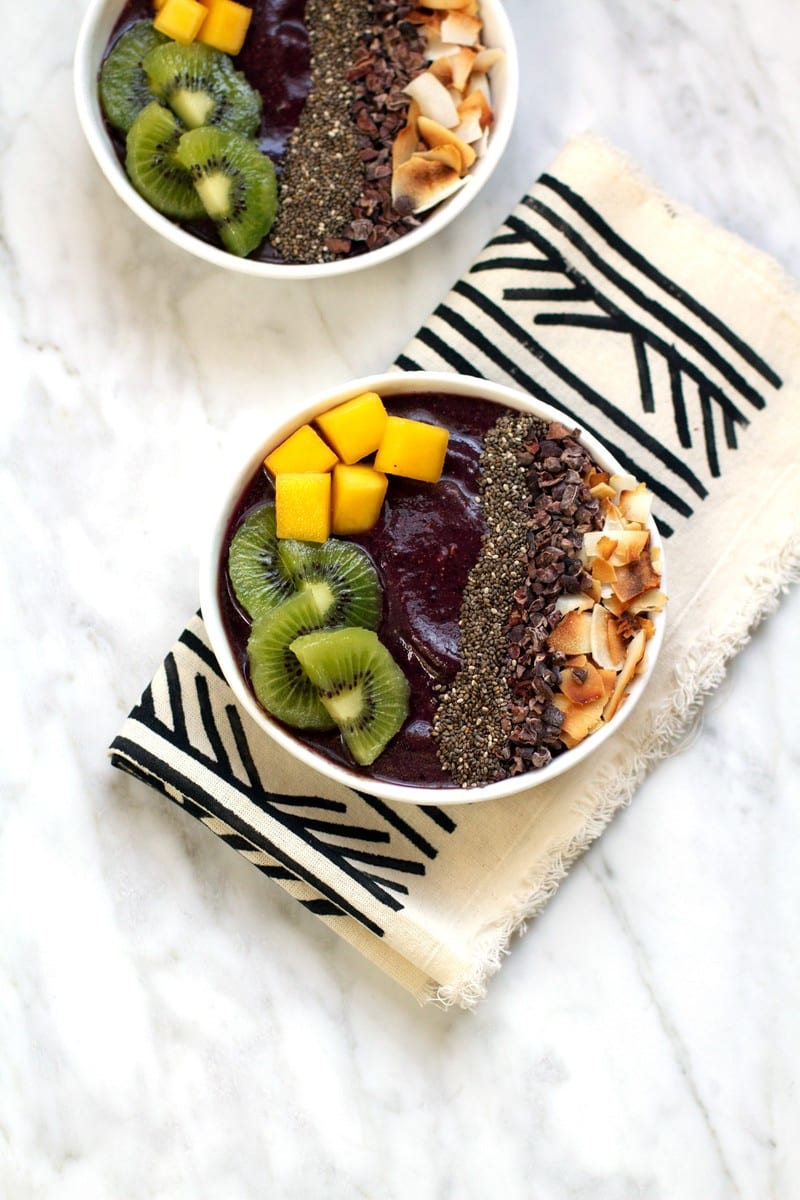 Per usual, the Brazilian soccer team is looking good and is especially eager to prove itself after their 2014 World Cup collapse. How to fuel up to watch this football-loving country kick butt? Açai! This superfood may be all over these days (especially here in SoCal), but açai originally hails from Brazil. To give team Brazil some super vibes, have some superfood in the form of a Tropical Coconut Chia Cacao Acai Bowl.

If you’re not much for superstition, there are these Fudgy Coconut Brigadeiro Brownies that are great on their own but even better with a pitcher of Sparkling Raspberry Caipirinha Cocktails. Either way, one thing’s clear: Brazil is as hungry for victory as we are for its cuisine. 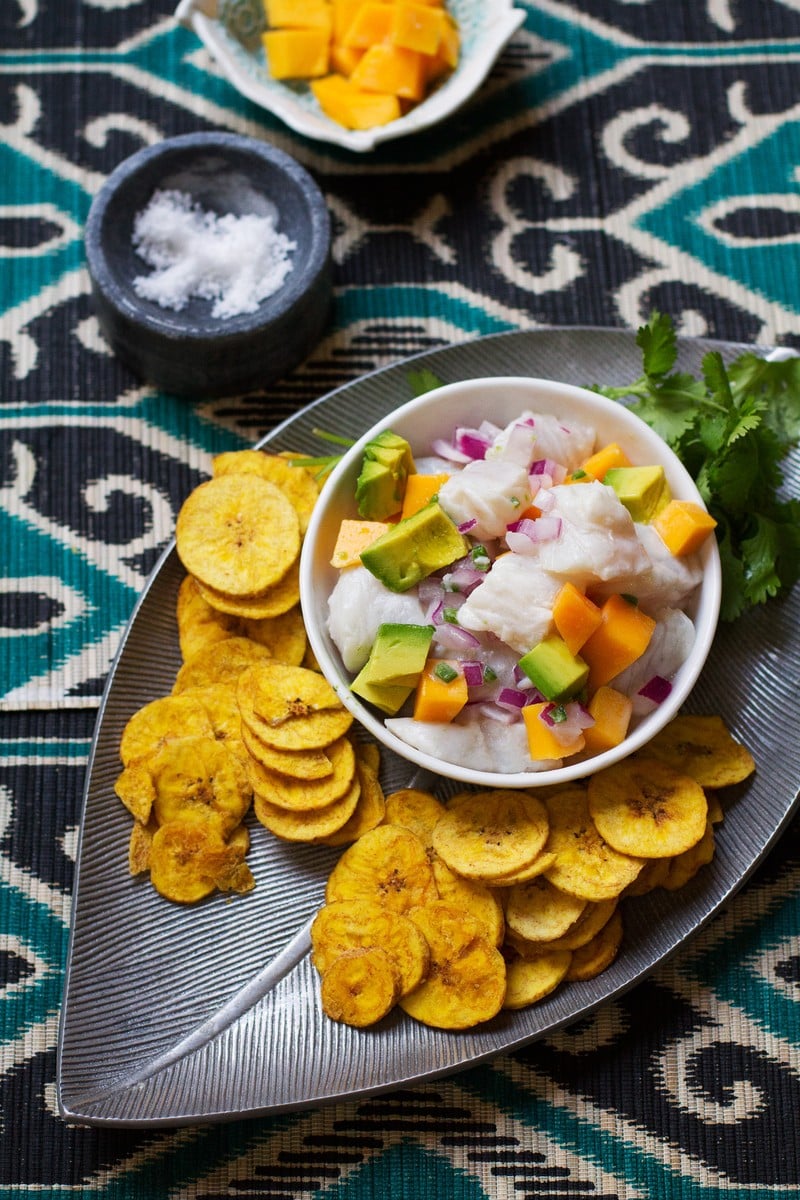 Goals have been hard to come by for Colombia these days, but we think this Halibut Ceviche With Mango And Avocado will make for a showstopping moment at any World Cup viewing party. 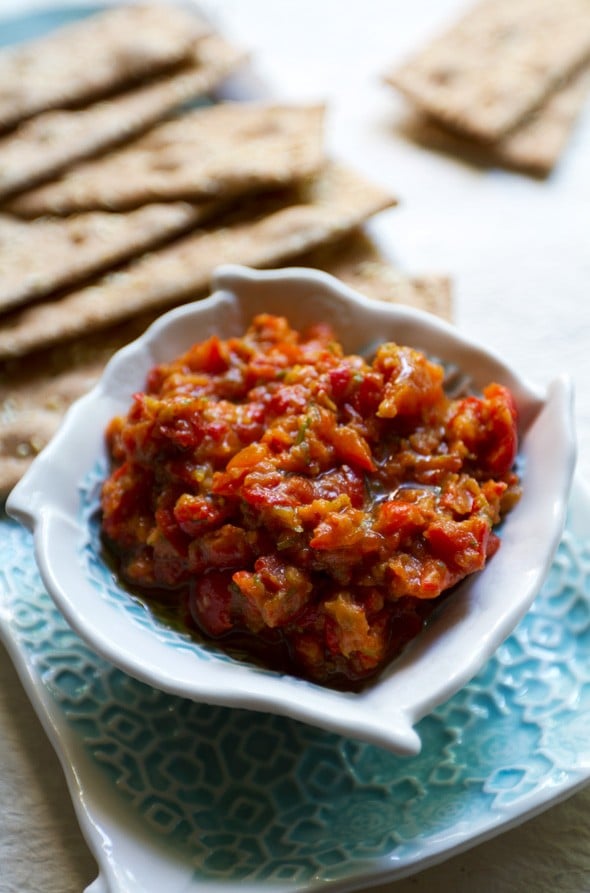 Croatia has a decent chance this year, its biggest challenge being the fact that it’s in a group with three solid soccer teams (Iceland, Argentina, and Nigeria). We liken the situation to that of {Ajvar}. This Croatian roasted pepper and eggplant spread is insanely good, but, like so many condiments it often gets passed over for other dishes at a buffet. We say give big love to small plates in your World Cup viewing party spread starting with this Ajvar recipe. 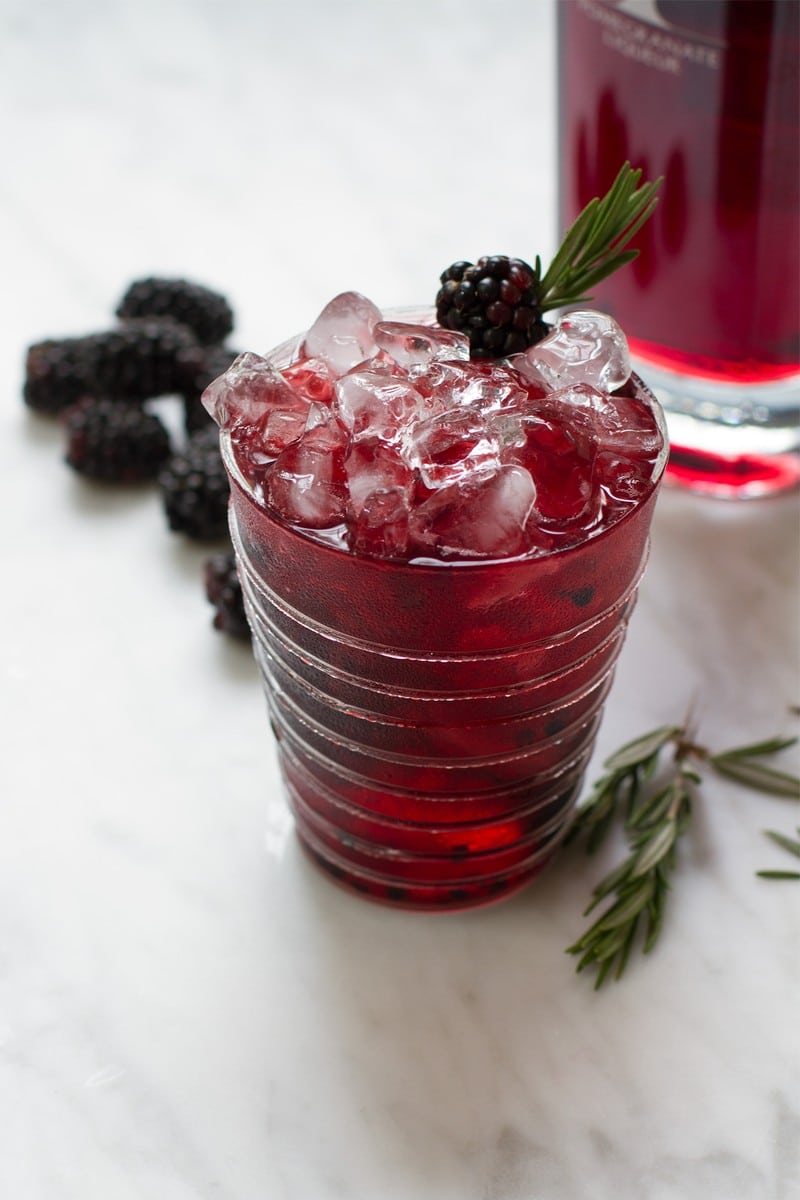 With one of the youngest squads in the league, England has tons of spirit and is dreaming big this World Cup. Much like how our founder, Aida, feels about her quest to make the Bramble Cocktail the it-drink of summer. Born in 1980s London, the Bramble has never been a popular drink in the States, but we think it’s high time to give it the attention it deserves. 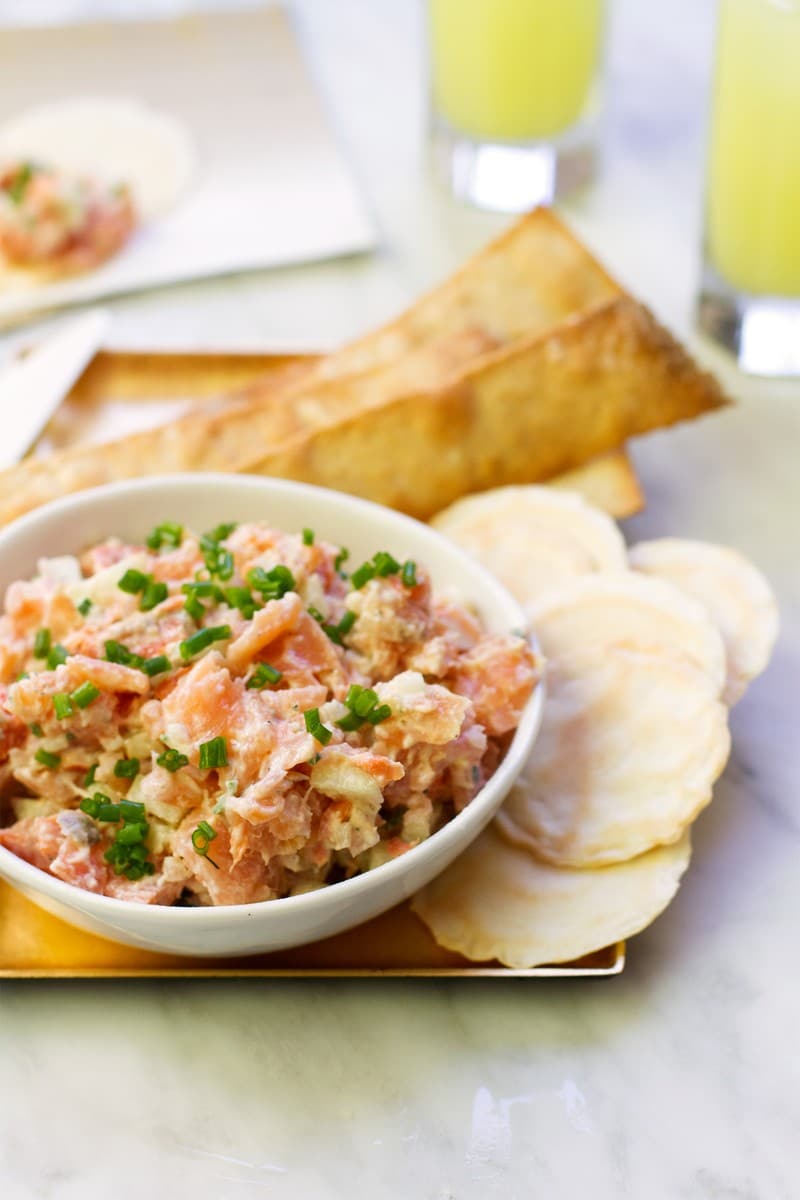 One of our absolute favorite places to travel, France is particularly strong in football this year, but its defense is a bit less trusty. That’s why we suggest serving {Salmon Rillettes}, a versatile spread that hits all the bases (err, hits all the goal posts as it were).

For something sweet, dish out some Coeur au Choux Meyer Lemon Cream Puffs or some Classic Madeleine Cookies. 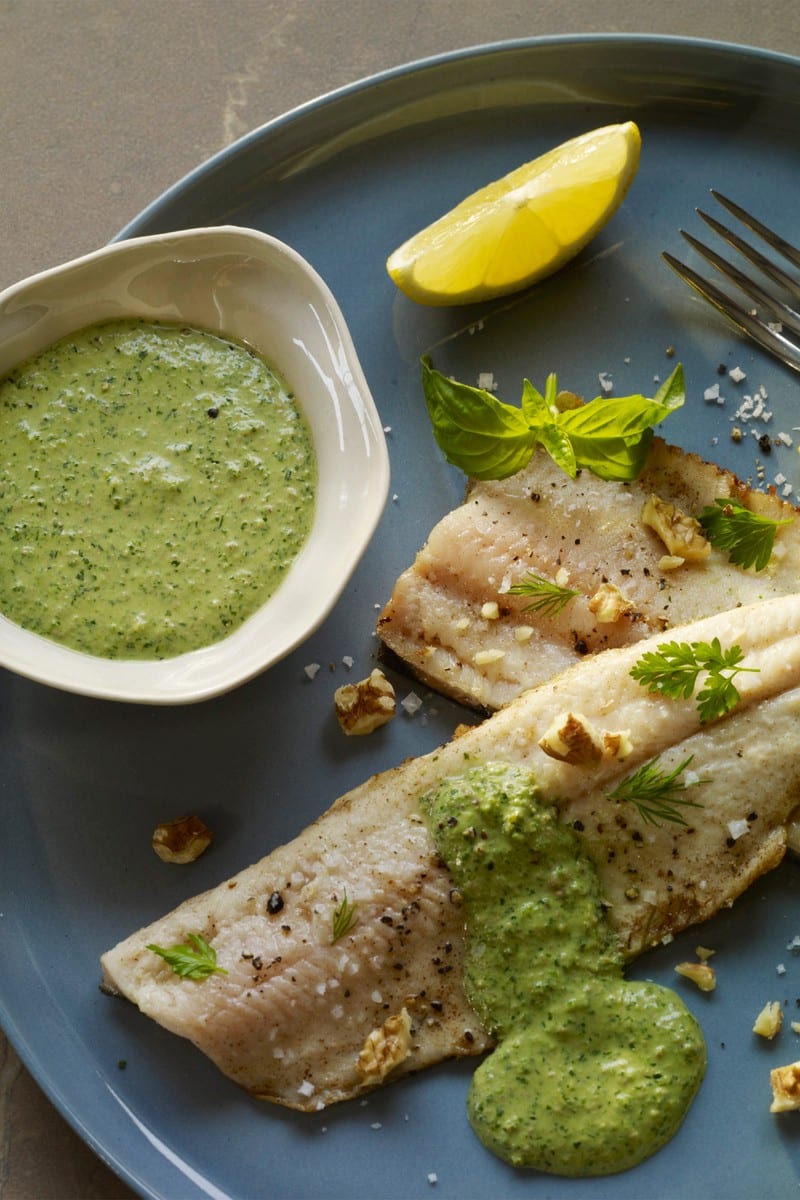 Germany is coming in hot. Not only are they the reigning World Cup champions, but they also won the Confederations Cup last summer and qualified for the finals with a perfect record. Needless to say things are looking pretty darn good for the land of Oktoberfest, breathtaking wine country, and apfelwein.

To cheer on this classic travel destination, serve up this pan-roasted fish dish served with our version of the oh-so classic recipe known as Grüne Soße or Green Sauce. Like Germany football the last several years, this dish seems to never fail. 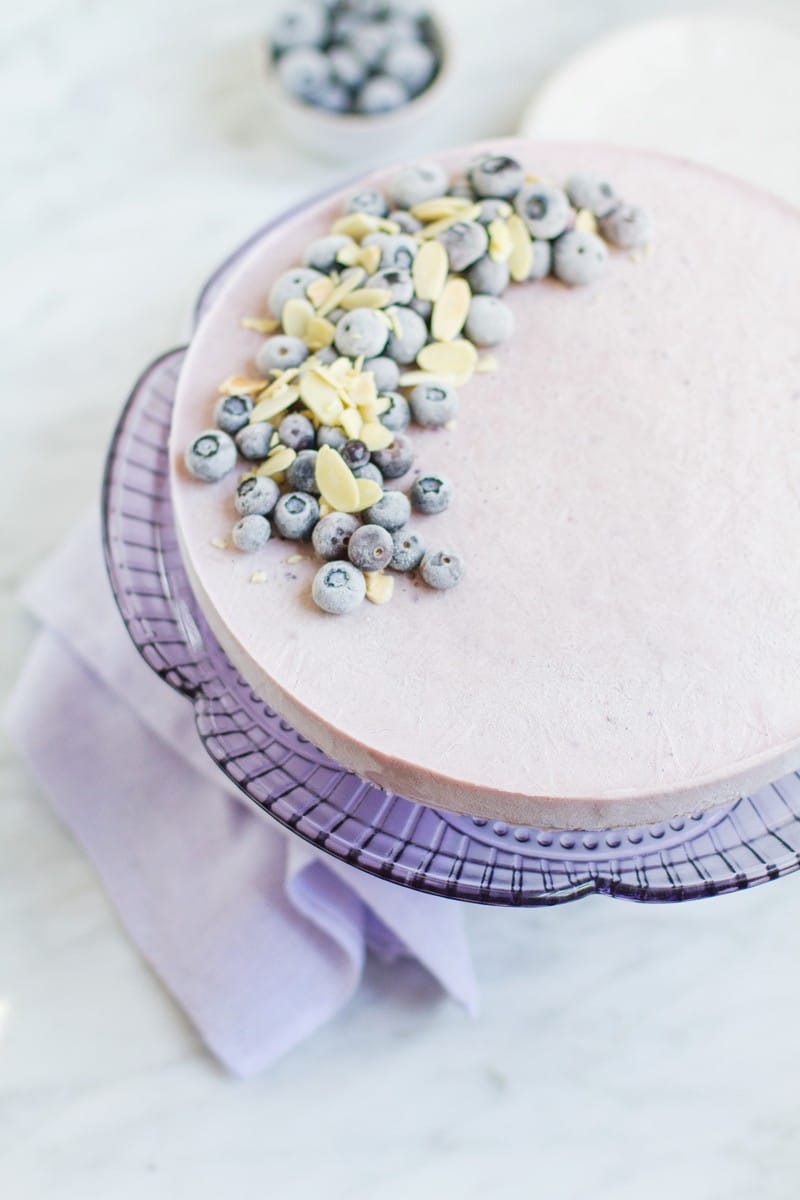 Iceland is a wildly beautiful place to explore (even for a long weekend!) and we’re stoked they’ve made it to the 2018 World Cup. This year not only marks Iceland’s first appearance in the tournament but also the country is one of the two smallest nations to ever reach the games (Panama being the other).

If you’re Team Iceland, go big on the celebrations during your World Cup viewing party and serve this dazzling Blueberry Icelandic Skyr Cake. 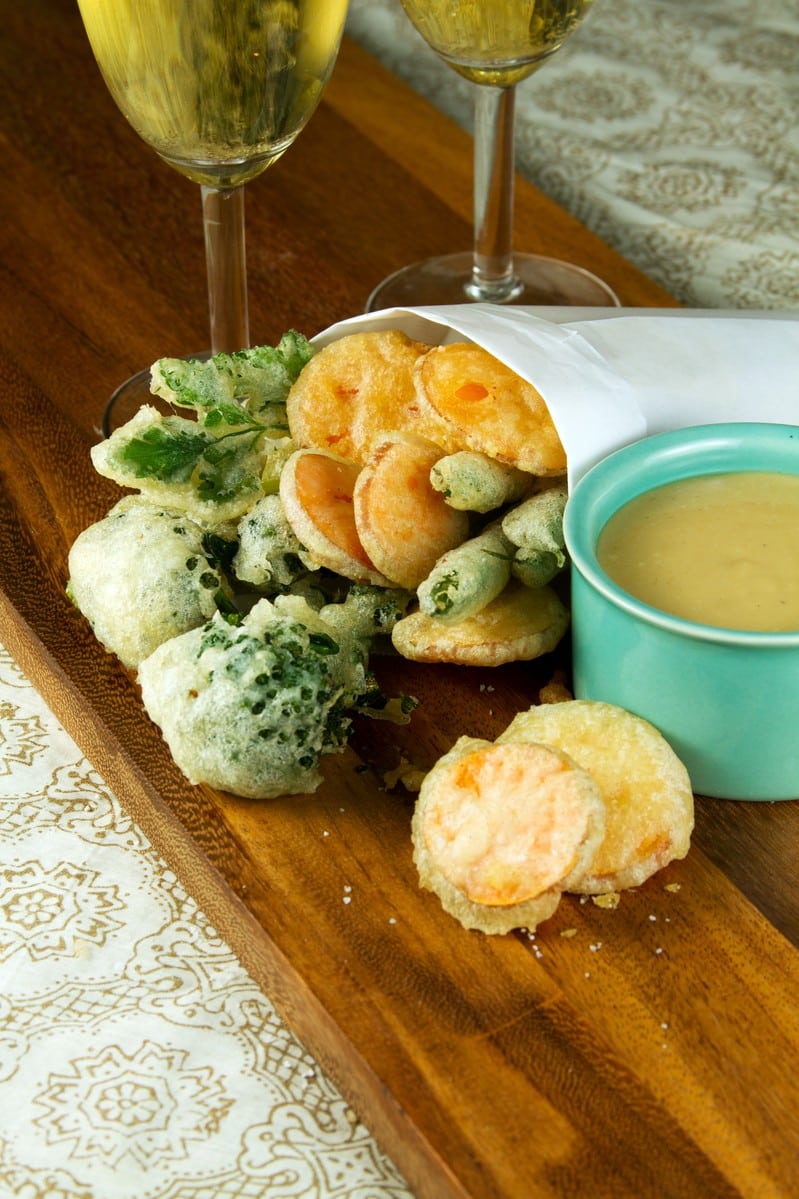 Japan may be forecasted as an early loser in the 2018 FIFA World Cup, but that doesn’t mean your party platter of Japanese-inspired dishes should be! For a guaranteed party food winner, serve these crowd-pleasing, sweet-and-salty Crispy Tempura Vegetables With Miso-Mustard, not to mention some Chilled Soba Noodles with Lemon-Ginger Dressing and Matcha Green Tea Shortbread Cookies. 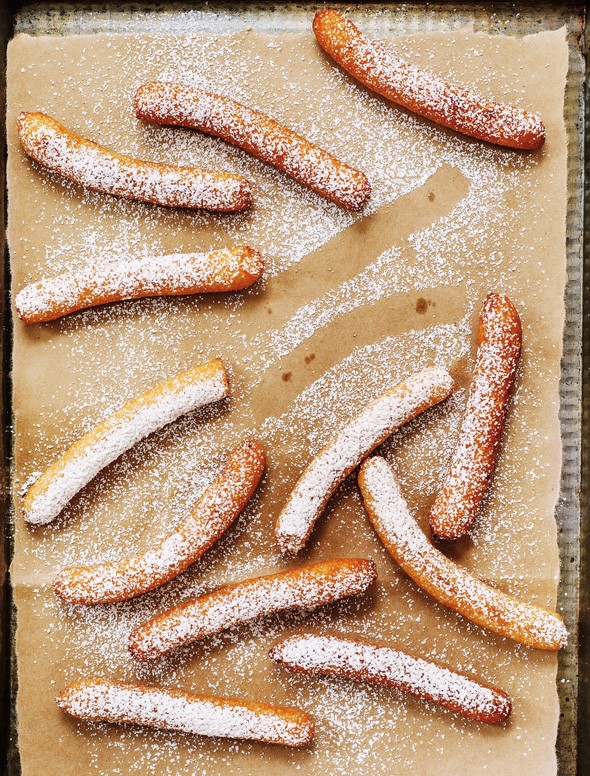 Ahh, Mexico, one of our very favorite places to travel (especially on our Salt & Wind boutique group trips) and home to a very strong football legacy.

Team Mexico has made it to the group stage at every FIFA World Cup since 1994 and lots of times before that, but has never made it past the quarter finals. Almost always a solid team, but always, as it seems, lacking that extra oomph, that it-factor necessary to really stand out. Good thing we have lots of recipes inspired by Mexico that we promise will stand out at your World Cup viewing party whether the team does the same or not.

Two of our faves? Breakfast Churros With Cinnamon Sugar and Zucchini Rajas Salmon Tacos, depending on your game-watching vibe. We’d also suggest rooting for Mexico with one of our best margarita recipes, or perhaps a Mexican-inspired cocktail recipe beyond the margarita, or both! 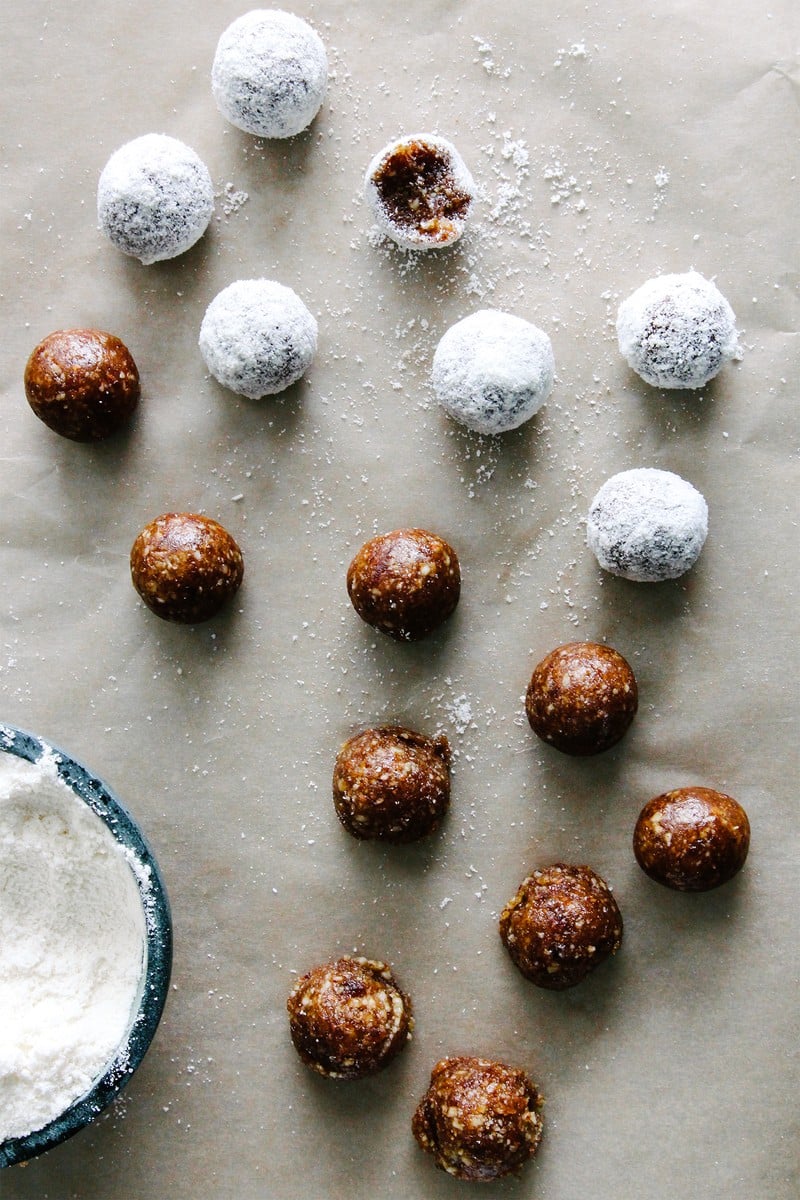 This year, Morocco’s football team has a strong foundation at the back and creative, talented midfielders, but struggles with productivity up front.

Snack on these Moroccan Fruit And Nut Truffles to bring good luck to the squad while you watch the games. These truffles have lots of healthy sugars and quick energy, the perfect recipe for kicking butt and scoring goals- literally and, for all of us non-professional-athletes, metaphorically! 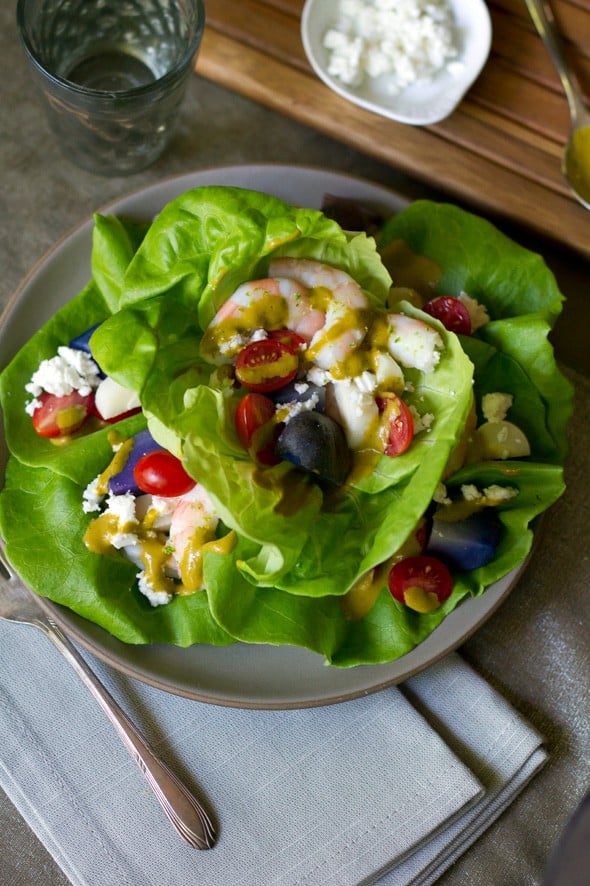 Until this year, Peru hadn’t qualified for the FIFA World Cup since 1982, so it’s safe to say the team is looking to make its mark big time now that it has the chance.

How to cheer on Peru? Well, at once sweet, salty, and slightly spicy, this Peruvian Shrimp Salad with Cilantro and Roasted Pepper Dressing does lots of things really well, and we can only hope Peru does the same! 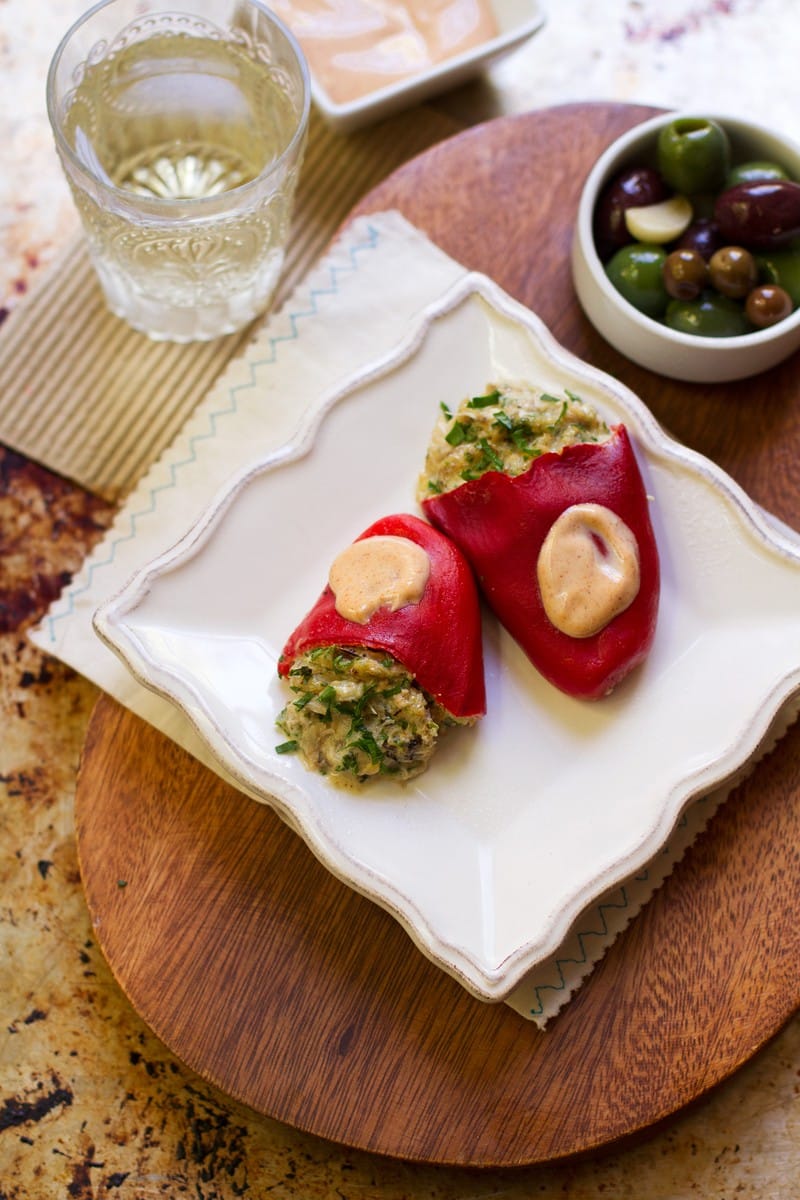 A top pick for both Salt & Wind travel adventures and the 2018 FIFA World Cup, Spain is a power player all across the board. The team won the 2010 World Cup and currently boasts several of the league’s top players, making it no doubt one to bet on this year. 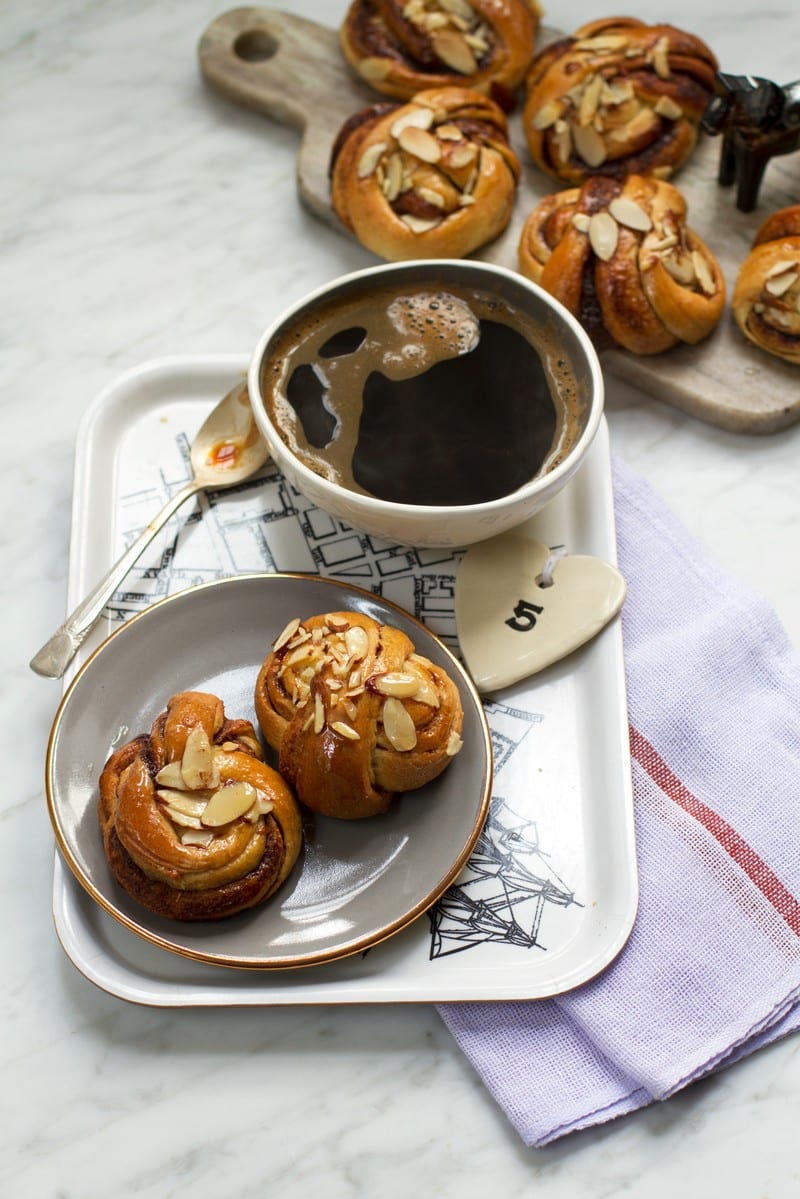 The 2018 World Cup marks Sweden’s first appearance after a 12 year absence and tbh things aren’t looking too hot for the Swedes.

The occasion is still a perfectly acceptable excuse to whip up some authentic Kanelbullar, aka Swedish Cinnamon Buns. With zero icing, they’re way less gooey and less sweet than American-style cinnamon buns. Rather, the excitement comes largely from the loads and loads of delightful cardamom and cinnamon that go into these Swedish delicacies. Win or lose, Sweden takes the cake in our book just on account of these amazing treats. 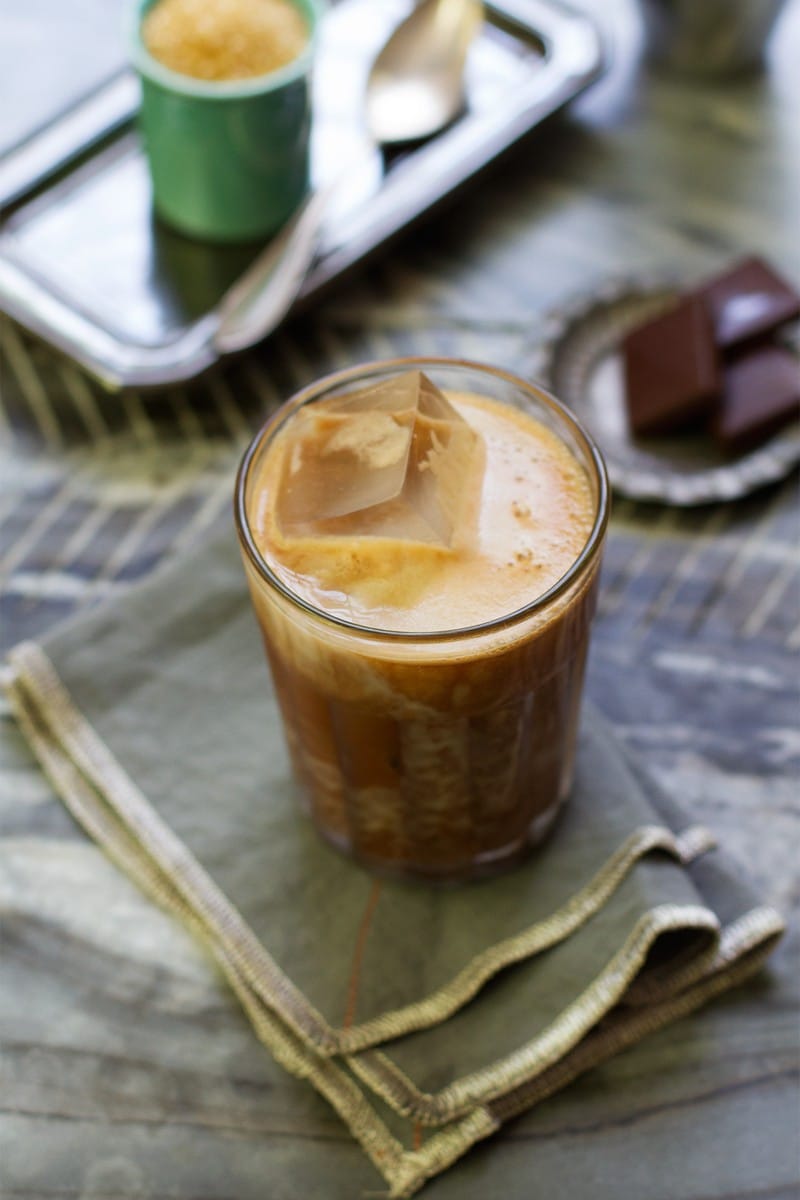 The Swiss have never made it past the quarter finals of a FIFA World Cup and their last quarter finals appearance was way back in 1954. Perhaps some caffeine wouldn’t be the worst thing to rev things up in honor of Switzerland this year?

To amp up our own energy to watch the games, we plan on going for a Caffe Freddo, aka a Zurich-Style Iced Mocha. But, if you’re more of a traditionalist and/or have enough nervous energy for the Swiss football team without the espresso, it’s a perfect time to pull out a classic Swiss dish like {Rösti}: a Swiss Potato Pancake with Sauteed Mushrooms. 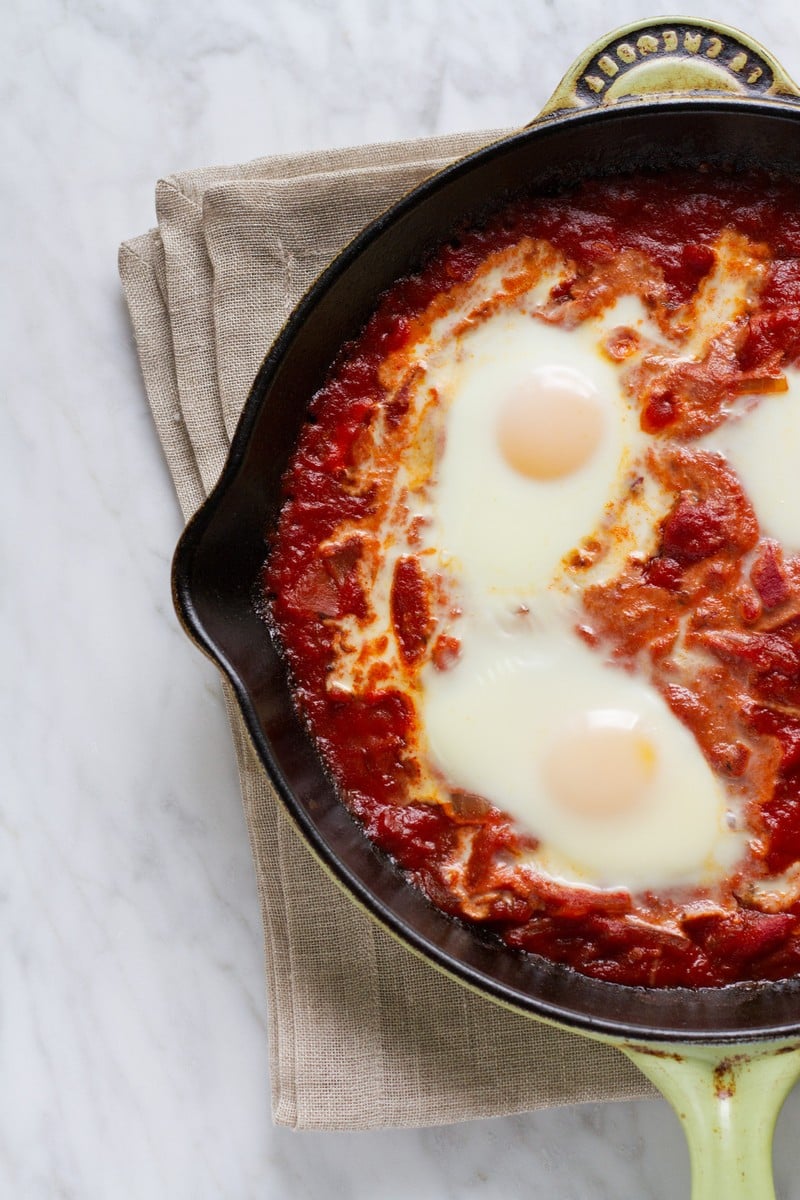 With more than a handful of severe injuries plaguing its football team in recent months, Tunisia may not be able to play enough of its top players and definitely might struggle to stay balanced and well enough to shine in the 2018 World Cup. We wish we could serve the especially spirited Tunisia team this warm, hearty, and all-around comforting Spicy Harissa Shakshuka as its members do their best to prevail, but you can bet we’ll be sharing it with friends as we watch and hope Tunisia defies the odds. 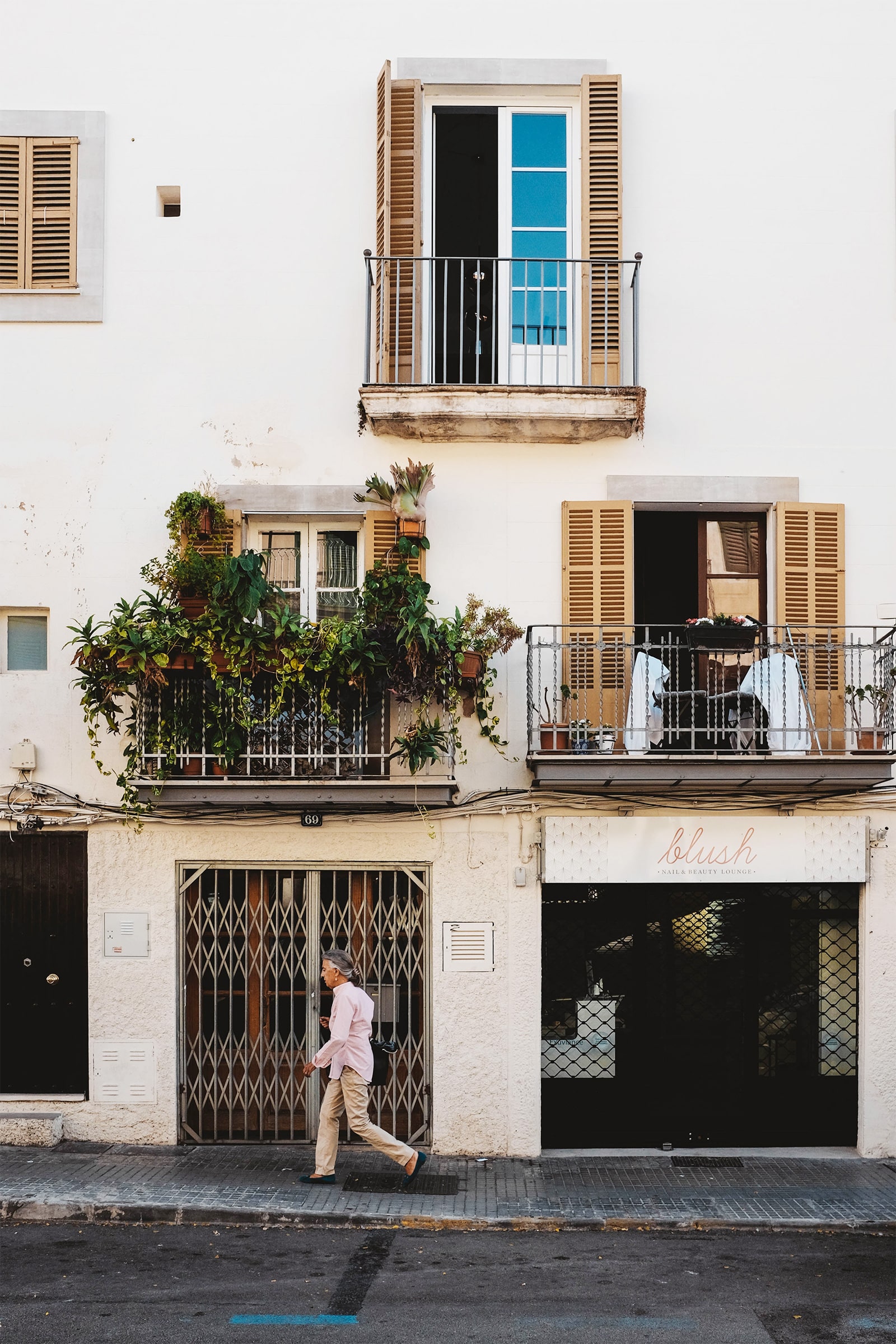 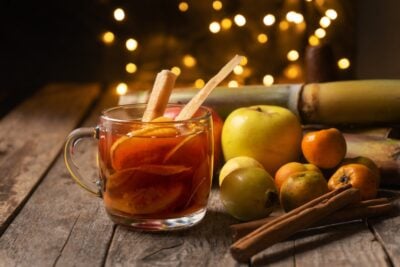 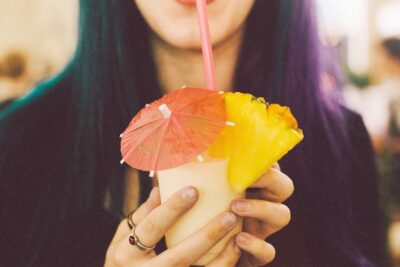 Destinations
Puerto Rican Food Is A Thing In Hawaii — Here’s What To Eat And Where! 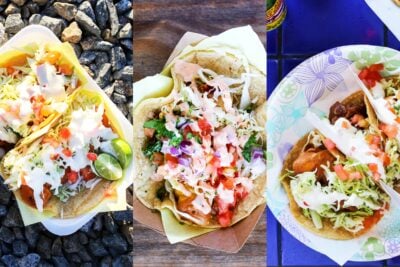 California
Where To Find The Best Fish Tacos In San Diego 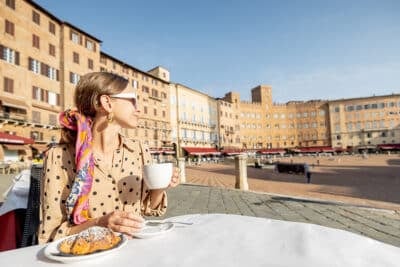 Italy
How To Plan A Trip To Italy For Food Lovers