These Classic Italian Desserts Are Reason Enough to Travel to Italy 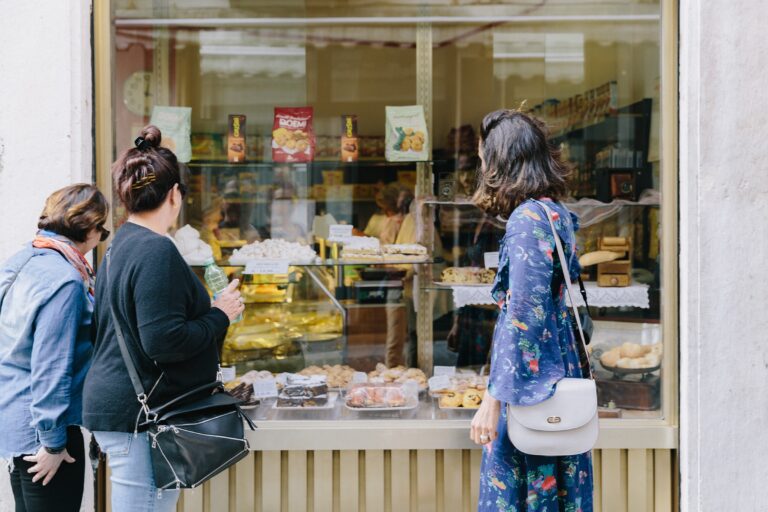 Did you know tiramisu is one of the top five Italian words most recognized by non-Italian speakers?

To be sure, Italy is home to some of the world’s most famous sweets; so, when traveling to Italy, the issue is not if you should eat dessert but where to eat which dessert.

Classic Italian Desserts Across The Country

With the help of the Italian culinary team at San Diego’s Cesarina restaurant, we’ve compiled a list of must-eat Italian pastries, frozen treats, and other authentic Italian desserts to search out when you travel to Italy.

To picture a bombolone, think of an American jelly-filled doughnut, but less dense and filled from the top (instead of from the side) with custard, fruit, or Nutella, says Niccolò Angius of Cesarina. These round, pillowy desserts––from the word for bomb, bomba––are related to a deep-fried Austrian pastry.

Known as krapfen, the Austrian pastry gets its name from a time when major parts of Italy’s northern region (including present-day Trentino Alto-Adige, Lombardy, and Veneto) were ruled by Austrians during the 1600s. In fact, you’ll still find these treats referred to as krapfen today, though you’ll find it referred to as bomboloni elsewhere in Italy, like Tuscany.

Translating to “cooked cream,” the classic Italian dessert is known as panna cotta is made by cooking a mix of sugar, milk, cream, and gelatin then leaving it to set to a smooth, slightly wobbly texture.

Said to have originated in the Langhe area of Italy’s Piedmont region, a well-made panna cotta is equal parts rich yet light. While you’ll find panna cotta served with all sorts of fresh fruit or even caramel or chocolate sauce, the traditional way to enjoy it is on its own.

Compared to other Italian pastries, the sizable sweet bread known as panettone is Milan’s most famous dessert. Historically made during the Christmas season, it was difficult to find panettone outside the region until the early 20th century. Speckled with raisins or dried fruit and kind of like a fruit cake’s less-dense, brioche-like cousin, panettone is a labor of love as it requires more than 36 hours to make!

When we can get our hands on panettone, we like it toasted, slathered in butter, and paired with a cup of coffee. Tradition says you’re supposed to save a slice of panettone from Christmas to eat on February 3, otherwise known as San Biagio day. Supposedly, it wards off sickness but we like it because it’s a delicious holdover from the holidays. 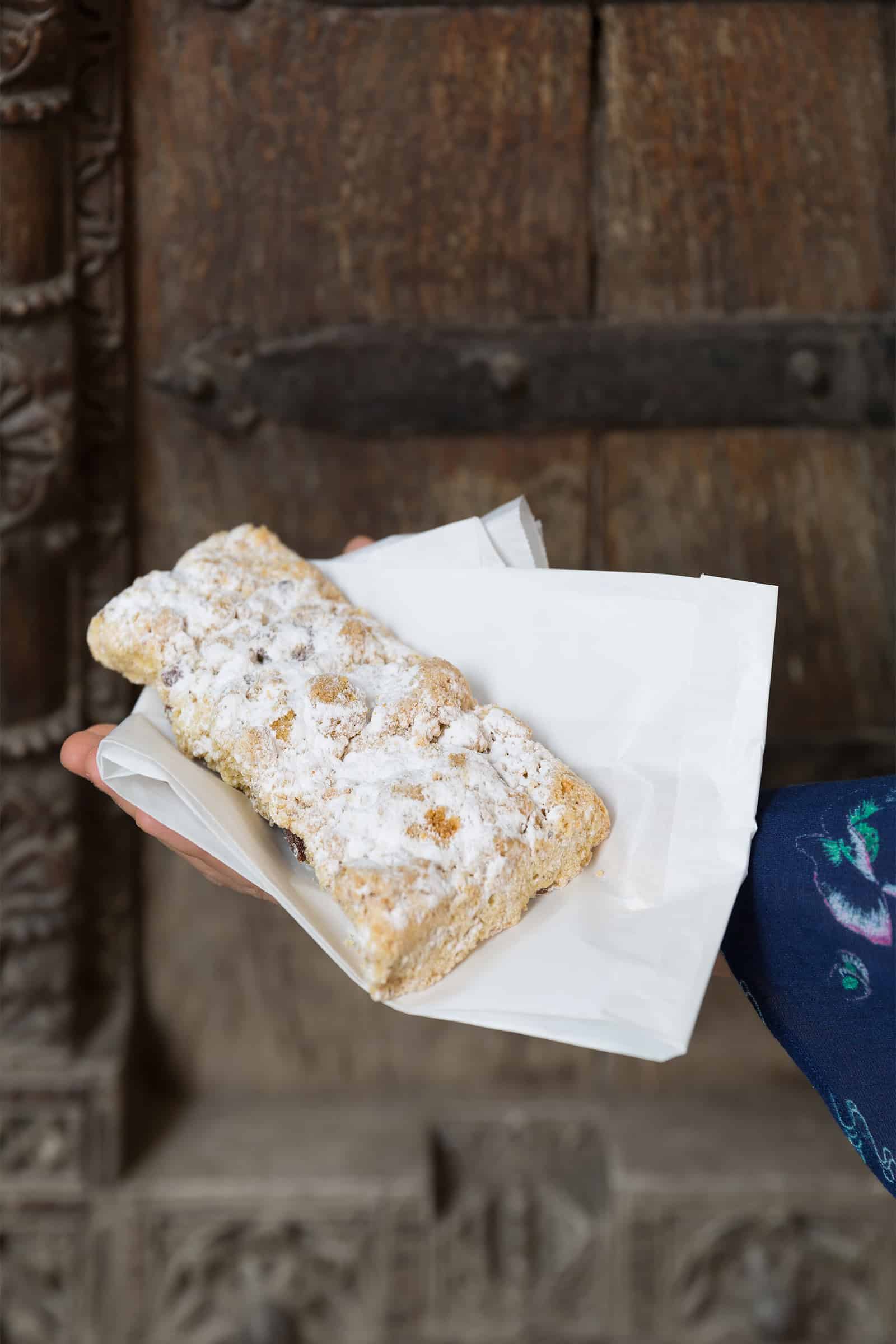 Traditionally, the crumbly cookie-cake hybrid from Mantova known as sbrisolona was eaten during Carnevale. Nowadays, when you travel to Italy you’ll find sbrisolona at bakeries throughout Northern Italy. This dessert is simple to make so the difference between good and great comes down to the ingredients — butter and almonds — and the technique.

Speaking of technique, the Cesarina team likes super crumbly sbrisolona, which they achieve through a technique called “a pioggia” or “like rain.” To get that super-specific texture, “the dough has to fall on the pan gently,” to avoid sticking together, says Angius. The dough is then baked together on a big sheet and is broken up into pieces (like brittle) before serving.

Few will argue over the makings of tiramisu, the classic Italian dessert where you layer mascarpone cheese, sponge cake cookies are known as savoiardi or ladyfingers, a drizzle of espresso, and cocoa powder. Yet its precise origin is hotly debated. Some say the Veneto is the true home to tiramisu while Friuli-Venezia Giulia (pointing to similar recipes from the 1950s) also lays claim.

Wherever its origin story lands, we’ll always and forever love this sweet “pick-me-up,” which is the dessert’s direct translation. And the secret to light and airy mascarpone cream layer in tiramisu? Angius says it’s to mix the egg whites separately and then blend it together with the mascarpone, yolks, and sugar, which is exactly how we make tiramisu here!

Take egg yolks and sugar, whip it all up and sweeten with a dessert wine like Marsala or Moscato and get the Italian dessert known as zabaglione. It’s also topped with chocolate shavings or cocoa powder, though there are lots of variations on this velvety theme.

Two stories claim it: The first is one that says zabaglione dates back to the ninth century Piemontese tradition, and the other version pegs zabaglione to 16th century Florence, at the court of the Medicis. Either way, this classic Italian dessert is one of our favorites when it’s made right! 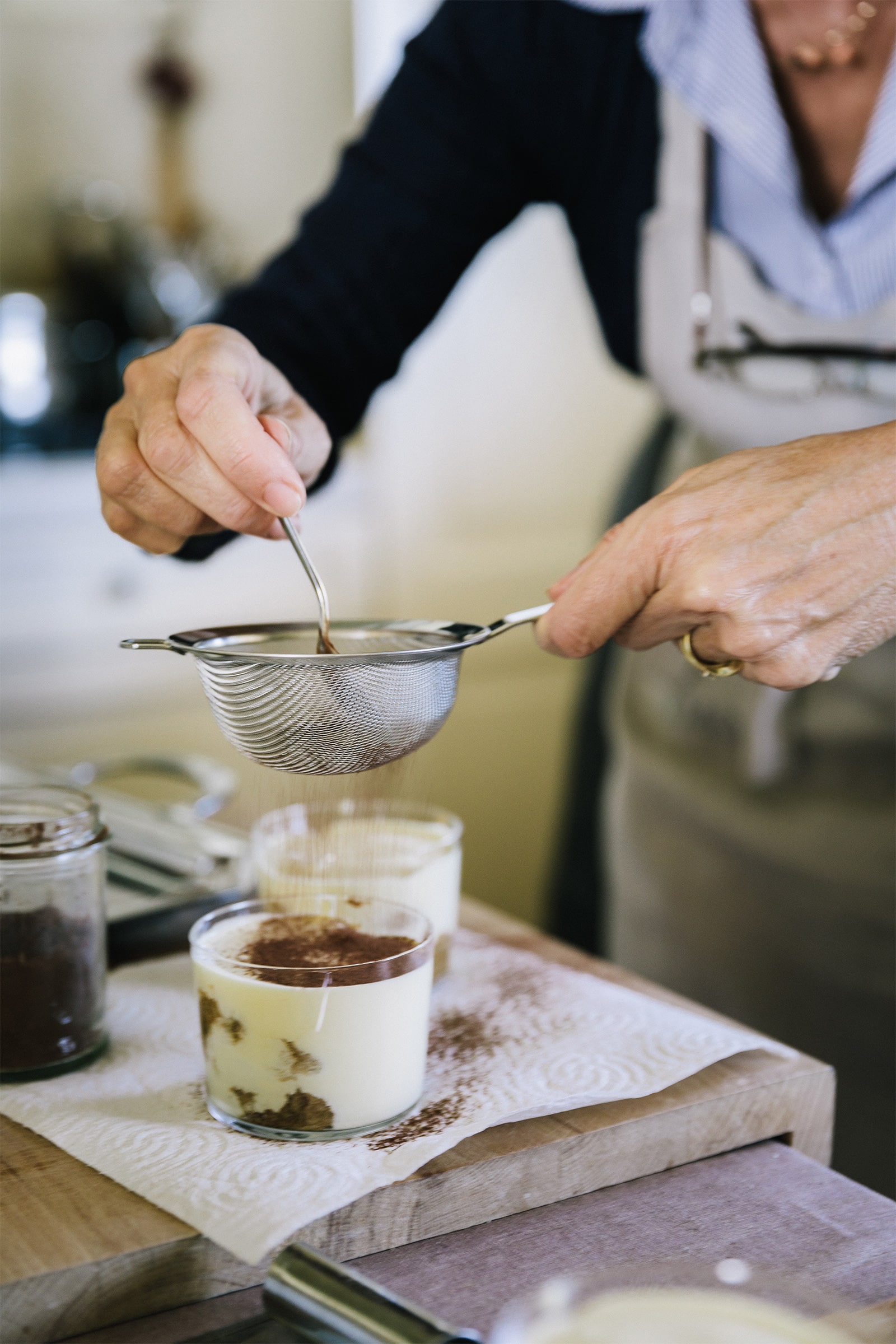 Meaning “twice-cooked,” these cookies are everything that is typical of Central Italian desserts — as in, simple to make and not very sweet. These dense, crumbly cookies pair as well with a cup of coffee as they do with the sweet dessert wine known as Vin Santo, as they do in Tuscany.

They have a seriously ancient history as they’re said to have been originally created to sustain ancient Romans since they traveled well (have you noticed they hold up well for a while?). What you will probably see when you travel to Italy is the kind of biscotti from the Tuscan town of Prato. They are often referred to as cantucci––in fact, we even share our favorite place to buy them in our Florence guide for food lovers.

The Italian word for “pudding,” budino is more like a cross between a cake and pudding, and is usually presented as a single serving. In Tuscany for example, budino is typically eaten for breakfast or as a snack. Most recipes call for eggs, milk, flavoring (like lemon zest and anise-flavored Sambuca), and something to thicken the combo before baking.

Believe it or not, this sweet dish actually began as a sausage dish in Italy before transforming into the custardy delight today. The transformation from savory to sweet may be most closely linked to religious exiles who arrived in Italy from Iberia during the 16th century.

In Italy, gelato (meaning “frozen”) is more of a catch-all term for lots of frozen treats, like semifreddo––meaning “semi-frozen”––and granita (see below). However, if you see a store selling gelato, it will likely be the ice cream-like dessert.

One of the most common questions we get from the guests on our boutique group food trips to Italy is  “Where In Italy Was Gelato Invented?” It turns out that Italy’s history with gelato goes back to Florence during the Renaissance when Cosimo Ruggieri created the first gelato flavor (“fior di latte”) and an architect, Bernardo Buontalenti introduced the first egg-based gelato. It’s said that Catherine De’ Medici served gelato at her wedding in France during the 1500s, but the dessert didn’t truly take off until the 1920s when the gelato cart was invented.

We have Tuscany to thank for torta della nonna — a lemony, vanilla custard tart topped with pine nuts and lemon zest when made the traditional way. Meaning “Grandmother’s cake,” torta della nonna has a pastry base with a creamy filling, and another layer of pastry before crunchy pine nuts are added. History says the combo of pastry, custard, and pine nuts has been around since the 1800s. There is also a chocolate version of this recipe called torta del Nonno––meaning, “Grandfather’s tart.” 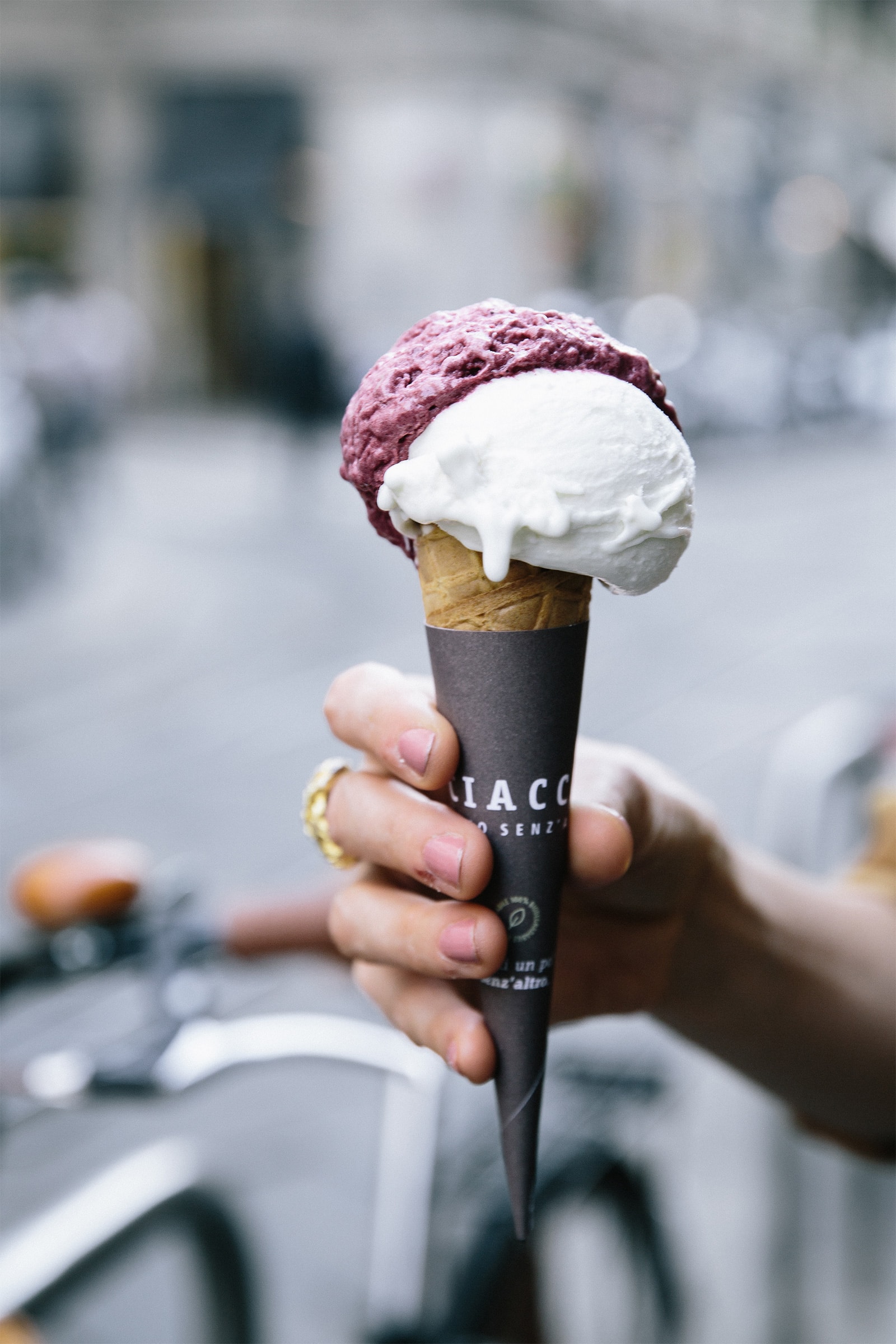 The classic, crunchy shell and smooth ricotta filling of cannoli were traditionally associated with Carnevale in Sicily (and were believed to have been sold in public squares). But some experts believe the Italian dessert goes back even further to ancient Arabic peoples.

It’s believed the shell might have represented Turkish hats or, even possibly was considered a symbol of fertility. Others believe cannoli can be traced specifically to Palermo and is named after “canna,” or the cane reed used to make cannoli shells. Traditional Italian cannoli recipes call for the shell to be filled with sheep’s milk ricotta sweetened with cane sugar and honey.

Granita is a frozen dessert made with coarse ice and all manner of flavorings and is 100 percent Sicilian. This classic Italian dessert can be traced 4,000 years ago when Mesopotamians gathered snow from the mountains to make cool drinks for royalty.

Sicilians bought snow from these vendors and, with the Arab introduction of lemon and sugarcane in the 9th century, they added sea salt for better refrigeration. Eventually, they also introduced a manual blade to shave the ice that is responsible for its unique granular texture. To try granita these days, we say do as the Sicilians and order granita with brioche!

There are a number of flavor combinations that make up this gelato-based dessert, but the most classic Tartufo recipe comes from the southern region of Calabria, where it’s said to have been created in the 1950s. The classic recipe includes a hazelnut and chocolate gelato combo that is sealed in a hard chocolate shell, like a giant frozen truffle, though you’ll also see Tartufo with nuts or fruit in the center and maybe even liqueur.

Looking to travel to the Bel Paese? Check out our Ultimate Guide To Planning A Trip To Italy or reach out to have us plan a custom trip for you! 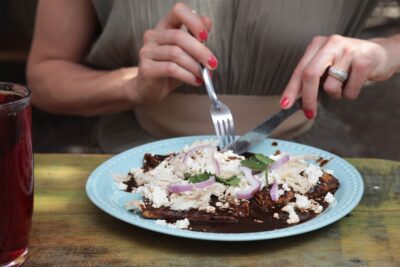 Destinations
The Classic Moles To Eat When You Travel To Oaxaca 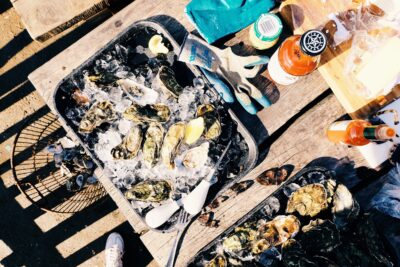 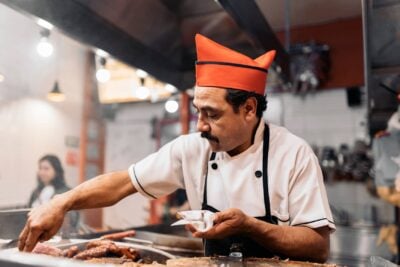 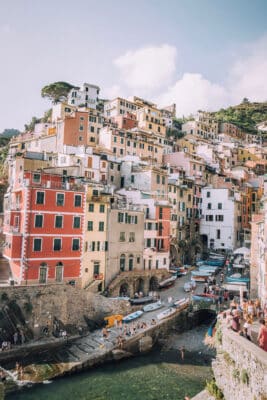 Destinations
10 Mistakes To Avoid When Traveling To Italy