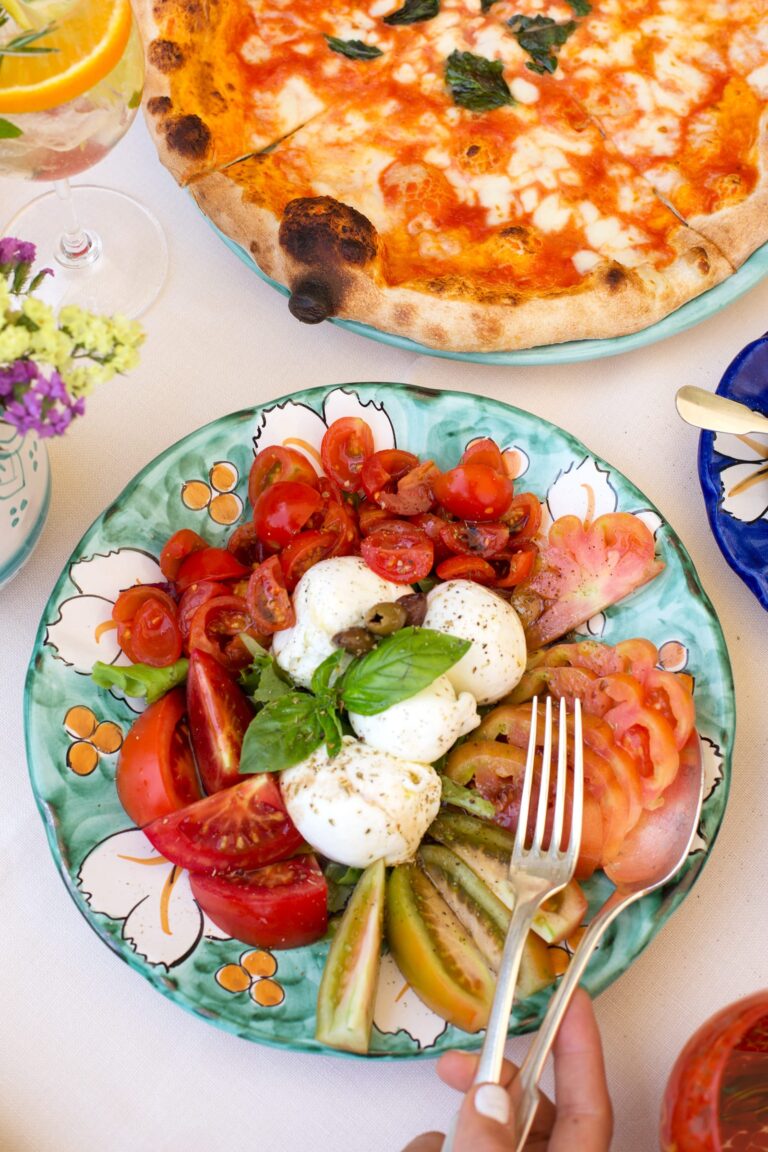 If you’re like us when it comes to all things Italian food culture, your dreams were fueled by the second season of Master Of None.

Let’s say you’ve secured that coveted ressie at Osteria Francescana, brushed up on your Italian, and packed the most Instagrammable outfits. The last thing to plan for your trip to Italy? How to fit in with the locals!

There are two types of travelers: those who make an effort to fit into the local culture and those who don’t give AF. Around here, we try to fit in, especially when it comes to eating out in Italy and etiquette.

True, we Americans may have nearly 150 years of Emily Post’s etiquette wisdom, but the Italians have us beat. Their definitive tome on table manners, known as Il Galateo, dates back to the Renaissance when Italy was ground zero for all things etiquette!

Yes, there’s a wide range of dining experiences, so you can keep things super casual if you’re noshing on street food, at a pizzeria, or a cafe. But, if your list of places to eat in Italy includes a ressie at a Michelin-starred restaurant or you’re heading to a classic ristorante, you’ll need to know a few things about dining in Italy.

Here are our top dining etiquette tips to follow when traveling in Italy:

Don’t Switch Your Knife And Fork

First off, know that Italians do not switch knives and forks; in other words, the whole time they eat, Italians keep the knife in the right hand and the fork in the left.

You May Be Given A Fish Fork And Knife

By the way, if you order fish at one of those traditional Italian restaurants, they might serve it with a fish fork and fish knife. A fish fork looks like a three-pronged fork about the size of a salad fork and the knife is like a larger, pointier butter knife. Use the knife (with the help of the fork) to remove the skin of the fish and to spread any sauce on the fish itself.

You May Have To Serve Food With A Spoon And Fork

Another utensil-related tip? If you’re served a dish for sharing — say a salad or side — and it comes with either two spoons or both spoon and a fork, you’re supposed to put them together and use them like old school tongs.

You’ve probably seen someone serve you bread like this in a nicer restaurant but in Italy, you may have to do it for yourself. In a pinch, you could of course, just scoop things off the plate with the spoon but this makeshift tong technique is actually really useful and, let’s be real, impressive!

Just like in the United States, you can use your utensils to indicate to your waiter that you’re finished with your meal. To do so, place the knife and fork parallel to each other across the right side of the plate, with the tines of the fork facing down. Also, if you put your utensils down on the plate for any real length of time, it is a sign that you are finished and your plate may be cleared.

There May (Or May Not) Be A Bread Dish

Heads up that while most formal restaurants will have a bread dish, most casual cafes may not. If you don’t have a bread plate, you can place the bread on your plate or directly on your table (especially if it’s covered in butcher paper) throughout the meal. Oh, and just to clarify, having oil and vinegar with your bread is an American invention so you won’t see it when you travel to Italy.

Our mothers made it crystal clear that placing our elbows on the table is an etiquette sin. But just because your elbows aren’t dinner guests doesn’t mean your hands can stay hidden, folded in your lap. When in Italy, keep your hands in plain view while resting your wrists on the table to make sure you don’t offend anyone.

We’re at the age where the thought of studying abroad is a mix of fond memories and some pretty horrid hangovers. Yes, you’ll inevitably indulge in some of the most decadent wine or traditional aperitivo cocktails while traveling in Italy, but keep your wits about you. Put another way Italians don’t drink to get drunk so being wasted won’t be a good look!

Along those lines, Italians do not have a culture of sipping cocktails or chugging pitchers of beer sans food. You’ll find that locals drink cocktails when at a meal, as part of aperitivo (like Italian happy hour), and even at a cocktail bar, but almost always there will be food present too.

Italian culture has some major superstitions, and it even extends the way they toast. In order to dodge bad luck, avoid toasting in Italy with water or crossing glasses during celebratory “cheers.” Instead, toast with alcohol, maintain eye contact, and say “Salute!” or “Cin Cin.”

Keep Away From Condiments

Chefs are highly offended by the use of condiments on their meals, as it’s seen as masking the original flavor. While permissible for a burger or fries, it’s best to leave it at that.

Stand When You Drink Your Coffee

When you go to a “bar” (which, by the way, is often more a cafe), you may pay two to three times more if you decide to rest at a table. Instead, make like the locals and stand at the counter!

Sometimes You Pay Before You Eat

For those who decide to stand at the bar, you actually pay before you eat. Especially common at coffee bars, you usually pay a cashier for what you plan to have, then take the receipt to the bar and order. How to know which process to follow? Just take a cue from the locals or ask the waiter!

Some Restaurants Only Take Cash

The Italians aren’t as into their credit and debit cards as Americans are so there are restaurants that will not even take them. Some say it’s to avoid the transaction fees others say it’s for more evasive reasons but regardless know that you should double-check if a restaurant takes credit cards (or that you have adequate cash) before you sit down to dine.

The Waiter Won’t Constantly Check In

For the most part, the waiter will take your order, deliver your food, and then leave you be. It’s not that they’re being lazy but rather that they want to let you enjoy your meal without distractions. That means if you want something from your waiter, you’re going to have to grab his or her attention and specifically ask for it.

Along Those Lines, You Have To Ask For The Check In Italy

Along those lines, when you’ve finished your meal and are ready to go, be sure to ask for the check in Italian (say il conto (pronounced “eel cone-toe”). Because, unless it’s well past closing time, a waiter won’t put a bill on your table until it’s been requested.

By the way, if you want an itemized version of the bill, ask for il conto lungo; otherwise, you might just be given a slip with a total dollar amount written on it.

The Person Who Invites Pays The Bill

Classically, in Italy, the person who does the inviting does the paying. Even so, it’s considered standard that the invitee or guest makes an effort to pay.

Il Coperto Is Not A Tip

When you get your bill you may see a line item listed as “coperto,” which is not a food item but rather a standard charge to cover the cost of the restaurant doing business (ie for the silverware, tablecloths, etc). Keep in mind this is not a tip but is a few Euro charge that is pretty standard to have added to the bill. But know that legally it should be noted on the menu whether the restaurant does include coperto charges.

Finally, know that in Lazio (the region where Rome is based), the coperto charge is illegal.

But Servizio Is A Tip

On the other hand, the term servizio does in fact mean a tip or service charge. If servizio has been added to your bill, you don’t need to leave any other tip unless you had the best service of your life. That being said, if all that’s been added to your bill is pane e coperto and you experienced good service, then you can leave something closer to 10%.

Keep in mind that waiters in Italy are compensated better than those in the United States, it is not customary to leave a 15 to 20% tip.

Tipping Is Not As Big A Thing In Italy

Bottom line is that tipping isn’t mandatory in Italy but is appreciated for good service. At a bar, you can leave small change, at a hotel, tip 2 Euro for your porter, and, if servizio isn’t included at a restaurant, leave 10% to 15%. Now that you know a bit about Italian dining etiquette here are our other top tips you should know before eating in Italy.

Any other tips you’ve learned while traveling in Italy? Leave them below!

Ashley Maurer is a content creator and strategist who's hungry for anything and everything. She currently helps people on their journey towards content and social media perfection.
Posts By This Author →

Ashley Maurer is a content creator and strategist who's hungry for anything and everything. She currently helps people on their journey towards content and social media perfection.
View Posts By This Author →