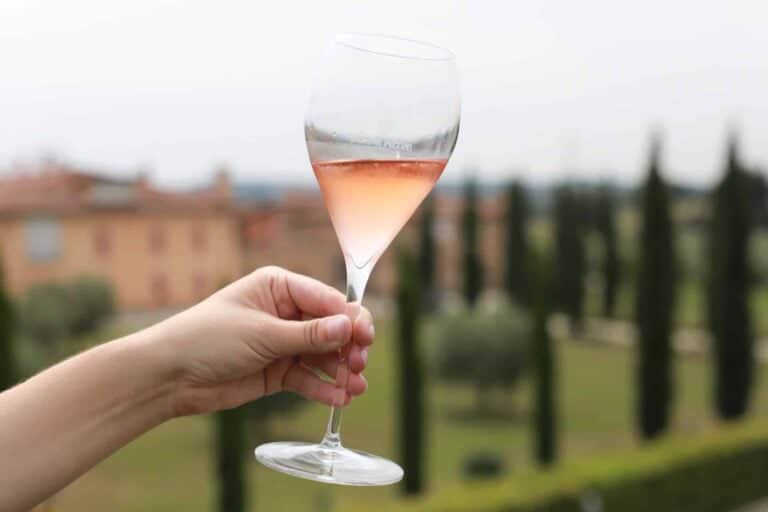 If you’re into bubbles and Italian wines, you’re probably already well-versed in prosecco and Lambrusco.

But there’s another Italian sparkling wine we’re geeking out over right now: Franciacorta.

Haven’t heard of it? Don’t fret. Franciacorta is one of Italy’s best-kept secrets, mainly because they keep the majority of the stash for themselves. And, unlike places with an ancient history of winemaking — a la Tuscany — Franciacorta got its start in the 1960s. But that doesn’t make it any less legit; all it means is there’s more to discover.

What To Know About Franciacorta Wine

We first came across the wine while traveling through Northern Italy a few years ago, and it’s quickly become a favorite — so much so that we spend a few days wine tasting in Franciacorta on our Salt & Wind Italy trips. It’s also a perfect place to take a day trip from Milan.

Franciacorta Is Made In The Traditional Method

Named for the region where it’s produced, Franciacorta wine is made in the “Champenoise” style or Traditional Method, so Franciacorta has a lot in common with Champagne than, say, prosecco.

That’s why you hear some refer to Franciacorta as Italian Champagne. Rather than getting its bubbles from a second fermentation in the tank, as prosecco does, Franciacorta becomes carbonated during its in-bottle secondary fermentation, giving it a drier, more yeasty taste.

Just Don’t Call It “The Champagne Of Italy”

Yes, we hear Franciacorta referred to as  Italian Champagne a lot. While Franciacorta winemakers take their methods from Champagne, it remains a solidly Italian wine. Yes, the name translates to “short France,” but that’s more of a historical nod to Charlemagne than Champagne.

To put it in perspective, Franciacorta is in the Brescia district of Lombardy, about an hour outside of Milan in central-northern Italy. Its idyllic perch on the south shore of Lake Iseo mean it’s downwind from the Alps, but thanks to the water, those breezes are tempered a bit (again, a perfect day trip from Milan!).

The Alpine foothills ringing the area ensure a specific microclimate that’s a good deal warmer than Champagne is, so drinkers can expect riper grapes, which means more fruit-forward wines. So, all in all, this is more of Italian sparkling wine.

While Franciacorta is similar to Champagne in that the two primary grapes used are Chardonnay and Pinot Noir, they stray from the French by allowing Pinot Blanc into the mix.

The production is also heavily regulated: wines are allowed to have up to 85% Chardonnay, 10% Pinot Noir, and 5% Pinot Blanc and each different designation of Franciacorta is required to spend specific amounts of time, aging, and contact with the yeast.

It Is One Of Italy’s Youngest Appellations

Franciacorta is also a very young wine appellation, which is relatively speaking, especially by Italian standards.

It’s The Bubbly Of Choice For Italian Fashion

That means when you see editors and celebrities sipping glasses of bubbles next to a lit-up runway, it’s almost certain those glasses are filled with Franciacorta.

There’s even a designation of Franciacorta called Satèn (which must have a minimum of 50% Chardonnay and up to 50% Pinot Blanc) named for the region’s connection to Milan and the fashion industry. The Satèn style is stored at lower pressure, so its carbonation is much more muted, silky, and smooth, like satin.

Yes, Franciacorta wines are available in the United States, but most are still in Italy. In 2015, 16.5 million bottles of Franciacorta were sold, but just 1.5 million of those were exported.

The international exports of Franciacorta are growing, though, and much of the exported wine gets sent to Japan (which we consider a significant endorsement seeing as Japanese epicures are sticklers for quality).

As a dry sparkling wine, the pairing options for Franciacorta are pretty much endless. Polenta, delicate pasta, white fish, and roasted meats are always good options — especially considering the region’s many lakes and the fact that it’s squarely within polenta country.

Franciacorta’s location in Lombardy places it in the rice bowl of Italy, which means risotto is fair game, too. We suggest trying this recipe for risotto with pears and speck — inspired by a local Franciacorta restaurant — with a glass of your new favorite bubbles nearby for cooking and drinking.

Franciacorta Winemakers To Seek Out

Keep in mind that a lot of the wine never leaves the region, so your best way to try Franciacorta wines is to go there IRL.