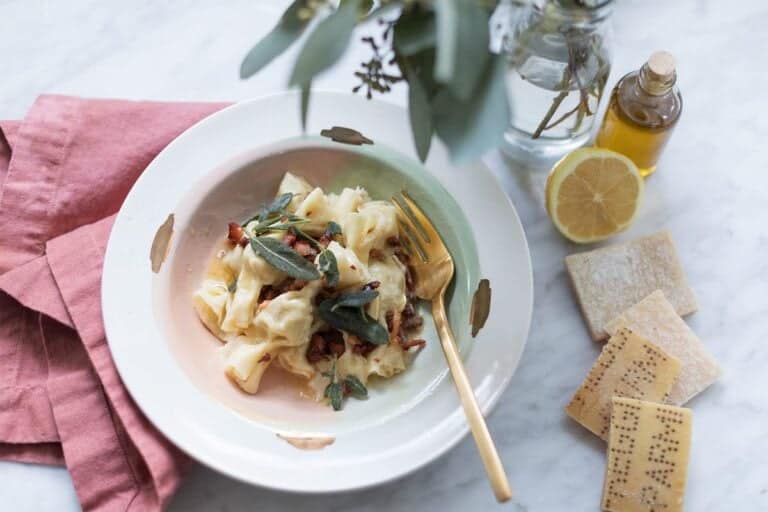 I don’t know about you guys but until recently I had never heard of this pasta before.

And it got me so excited because that’s exactly why I love to travel — to discover new food all with the aim of getting inspired to get in the kitchen and make it myself!

Ever since we launched our group trips to Northern Italy’s Lombardy region, we’ve fallen for the food of Lombardy and discovered so many flavors that are new to us from Manzo all’olio and mondeghili to sweets like torta sbrisolona.

On one of those first trips to Lombardy, my food discovery was this candy wrapper-shaped pasta known as casoncelli (pronounced “cass-own-chell-ee” by the way) in Italian. They hail from Bergamo so they’re often also called casoncelli alla Bergamasca. Oh, and they are also called casonsei (pronounced “cass-own-say”) in the local dialect so, if you see any of those terms on a menu, know that they’re the same dish!

Here’s the thing: this pasta is undoubtedly from Lombardy and everyone you come across will recommend you try it; however, no two casoncelli recipes are exactly the same.

Across Lombardy you’ll find the pasta with a slightly different filling—some stuffed with shredded pork, others with raisins and the local Grana Padano cheese, some with pears and amaretti cookies, and others without. And there are even slightly different shapes—some more of a half-moon while others, like these, resemble a candy wrapper.

What is consistent is that the casoncelli are a stuffed pasta that hails from the Lombardy region and uses ingredients that are totally 100% Lombardy, from the local cheese Grana Padano and the butter sauce (this region of Italy uses butter more than olive oil!) to the local macaron-like cookies, amaretti biscuits so you’re eating the flavors of the region with every bite.

What To Know Before You Make This Pasta

Yes, this recipe is an undertaking, as it’s about 3 hours from start to finish, so it’s the kind of recipe you’ll want to take on as a weekend project. But do make this pasta because it will quickly become one of your favorites!

By the way, this Casoncelli Pasta With Pancetta Brown Butter Sage Sauce recipe makes a lot of pasta because once you decide to make homemade pasta, you might as well go for it. I make a full recipe, let the shaped pasta dry for a few hours at room temperature then cook what I want to eat immediately and freeze the rest (by first freezing the pieces on an uncovered baking sheet then combining them all in an airtight container for storage) for a later date.

The pasta will last up to two months in the freezer so, if you want homemade pasta at your next dinner party or holiday feast, you can make them ahead of time, freeze them and then just cook them and the sauce the day of!

Oh, and if you don’t want to make the full recipe, that’s totally fine. The pasta dough is a workhouse dough that is perfect for shaped and filled pasta or just toss your favorite store-bought pasta in the uber-comforting smoky, sage-y brown butter sauce.

Now go stock up on all your cooking essentials, then head into the kitchen, make this, and share it with us by tagging @saltandwind and #swsociety on social!

Want to remember this recipe for a future dinner party? Go ahead and save it to your Pinterest board so you can access it later!