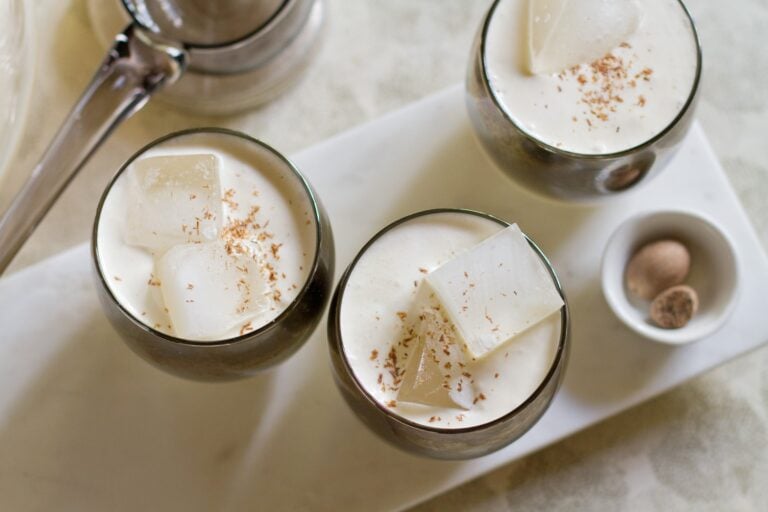 We know this recipe sounds sketchier than an email banking scam, but it’s anything but.

Our Editor In Chief, Aida, first came across this aged eggnog recipe back when she ran the Test Kitchen at CHOW magazine, and she was immediately intrigued.

She didn’t grow up in a family that served eggnog during the holiday season and had certainly never made eggnog from scratch. Never mind a recipe where the eggnog base ages for weeks (or months!).

The Problem With Most Eggnog

Here at Salt & Wind Travel, we tend toward dessert recipes and cocktails that aren’t too sweet as such eggnog has never really fit in – because most recipes are too sweet, too heavy, and just too over the top.

Simply put, most eggnog recipes are unbalanced and make it, so it’s hard to take more than a few sips. 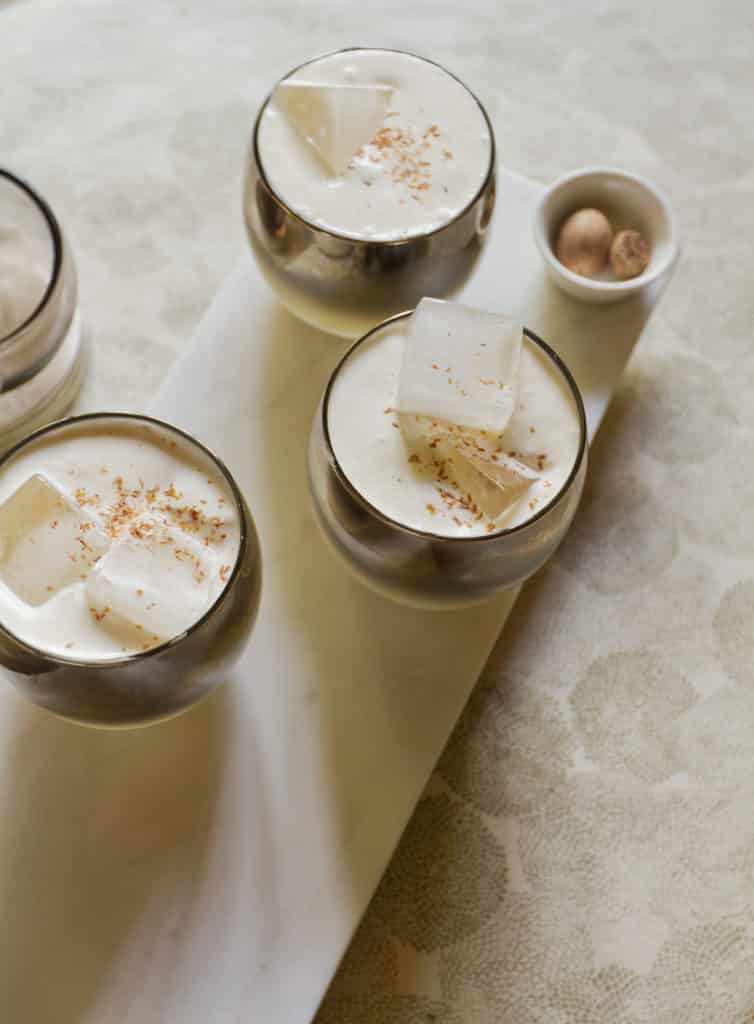 The Key To Aged Eggnog

But then we tried this aged eggnog recipe, which we can promise is unlike any other eggnog you’ve ever seen. The key is aging the eggnog, which allows the flavors to mellow and meld together.

The result is that, instead of the overly sweet, booze-filled stuff you’ve tried before, this eggnog is balanced and flavorful but still with a decent boozy kick.

And the addition of whipped egg whites and whipped cream just before serving? Well, that makes it also seem lighter and less intense than the stuff you get in the carton at the store.

How Far Advance Can You Make Aged Eggnog?

We’ve heard of people aging eggnog for years, but the longest we’ve gone is one year. Yes, that was one year of the eggnog in a sealed container and at a constant state of 40°F or colder.

The result is distinct, an acquired taste as it ups the “eggnog” flavors, and the booze is almost undetectable.

We like it best when it has aged between 2 1/2 weeks up to one month. Our go-to schedule is to make a batch the weekend after Thanksgiving and let it age until Christmas Eve.

That few week seems to be the perfect amount of time to mellow it out so that it’s creamy, a bit sweet, and boozy, but not too much of anything.

How To Safely Make This Recipe

Speaking of keeping things cold and safe, we have a few tips for you to make this eggnog safely.

As you let it age, you’ll want to tuck it into the back corner of your fridge where it’s cold but not frozen. If you have a refrigerator thermometer, keep it near the eggnog and make sure your refrigerator stays nice and cool (say 35°F to 38°F).

This is still a drink made with raw eggs, so you should buy the freshest eggs and be extra clean when handling all the raw ingredients.

Don’t Serve Raw Eggs To Anyone Of Compromised Health

This a little reminder that raw eggs are never a good idea for pregnant women, the elderly, little ones (who, of course, shouldn’t be tippling on the eggnog in the first place), or anyone else whose health is compromised.

The good news is that eggnog has so much alcohol that the risk for contamination is minimal, and, yes, the alcohol also helps to make aging the eggnog safe.

Keep The Sugar And Alcohol As-Is

Finally, do not change the total amounts of sugar or alcohol in this recipe as they are the key to keeping it food safe.

We have found that this recipe needs to stay above 20% ABV, which works out to just over 5 cups of total alcohol for these types of liquor.

If you want to lower the sugar and alcohol, you’ll have to use pasteurized eggs or cook the base (by constantly stirring as you cook it over a double boiler until it reaches 180°F) to ensure it’s super safe!

How To Serve This Eggnog

We like to serve this in a punch bowl with a big block of ice as part of our annual holiday party. Some guests like to drink it the whole night, while others have it as a liquid dessert.

How To Make An Ice Block

At least one day before serving the punch, arrange some spices like cinnamon sticks, star anise, and maybe apple rings (remember, whatever you add to the ice block will eventually melt and end up in the eggnog) in a small loaf pan, bundt pan, or baking pan.

Fill with filtered water to cover the fruit and then freeze until solid. Plan to make the ice block at least a day ahead so it has plenty of time to set.

Here are a few other holiday recipes you may want to make:

Go stock up on all your cooking essentials, then head into the kitchen and make this. Share your creation with us by tagging @saltandwind and #swsociety on social! 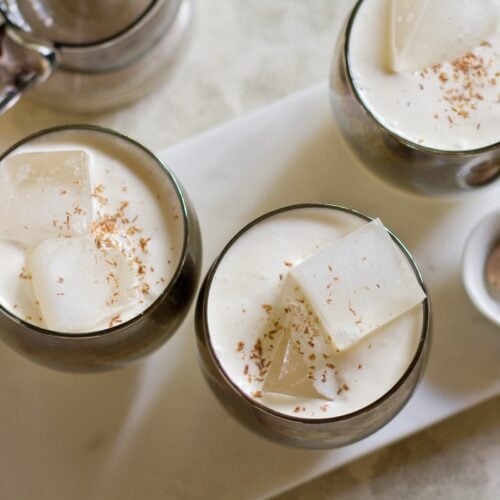 Preparing The Aged Eggnog Base:

The Night Before Serving The Aged Eggnog:

How To Serve The Aged Dggnog: 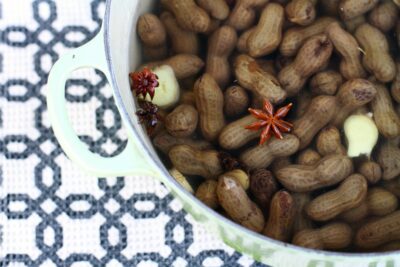 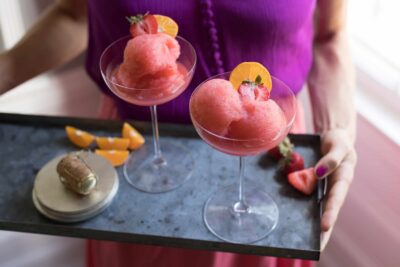 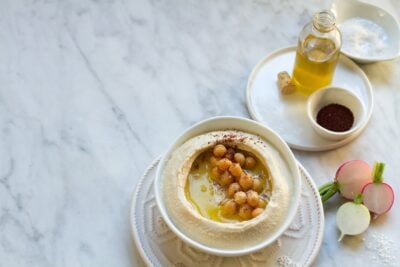 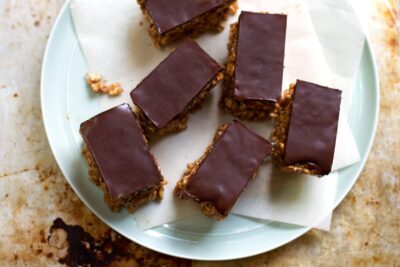