Cheers To Chianti: Get To Know This Famous Italian Red Wine 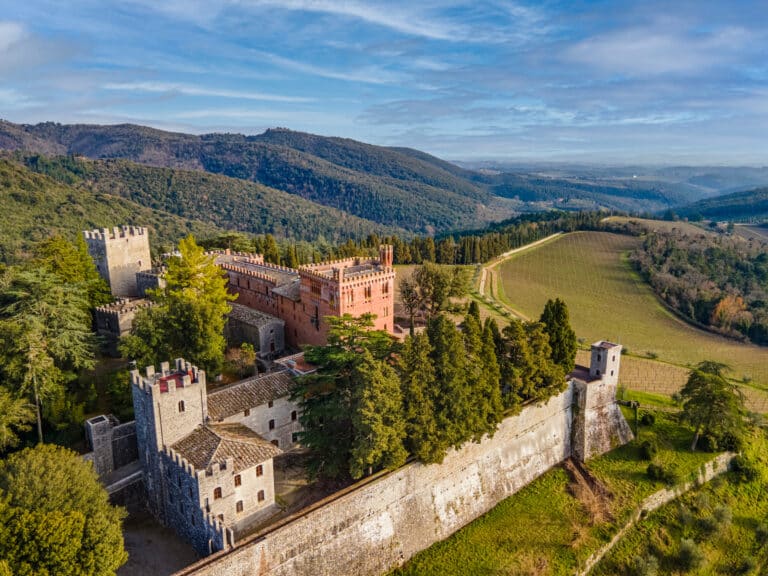 We say Italy and wine, and it likely brings to mind historic villas, rows of cypress trees, and rolling hills dotted with vineyards. That vision you have, friends, is of the Chianti wine region.

But it can quickly raise many questions. If you’ve heard the name but are unsure what Chianti is exactly (hint: it’s not a grape), this guide is for you.

The History Of Chianti

You may assume Italian wine originated with the Romans, but it originated in Tuscany thanks to the Etruscans, the ancient people of central Italy. Tuscany is home to Chianti wine, made with one of the oldest grape varieties in Italy (Sangiovese!). It’s also the first wine zone defined worldwide, dating back to 1716!

Let’s dive in to learn a bit more about this Italian wine:

Where In Italy Is Chianti?

Chianti (pronounced KEY-on-tee) is the name of a region in Tuscany that specializes in a tangy, dry red wine called Chianti (hence the confusion).

The region borders Florence to the north, Pisa to the west, Arezzo to the east, and Siena to the south. Wines are classified based on region, quality, and aging, and only wine produced in this area can be labeled “Chianti.”

It’s Not A Grape

A common misconception is that Chianti is a grape, but it is a red wine blend made from a minimum of 70% Sangiovese grapes. The remaining 30% comprises Italian grapes, like Colorino or Canaiolo, or international grapes, like cabernet sauvignon or merlot. Some producers even make it with 100% Sangiovese.

The Term Can Refer To a Few Areas

As a region, Chianti has eleven subzones, so you’ll find a few different types of wine within the denomination. At the bottom of the hierarchy is Chianti, a catchall appellation. Then you have Chianti Classico, an appellation with its rules (more below). Other subzones with a reputation for high-quality bottlings include Chianti Rufina and Chianti Colli Senesi. 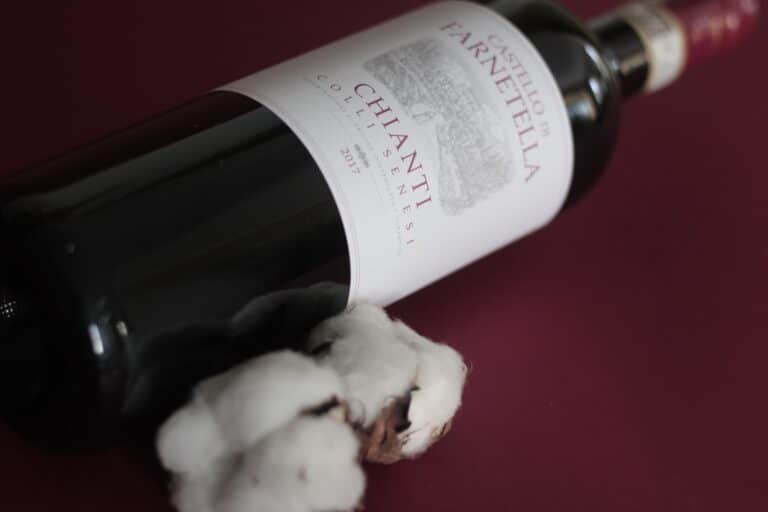 The region was classified as DOC n 1967 and then was given DOCG classification in 1984 (head here if you need a reminder of what those terms mean). Then, in 1996 Chianti Classico became an independent DOCG, and Classico is now considered the original zone.

What Is The Difference Between Chianti And Chianti Classico?

The Blends Are Different

The main grape in both appellations is Sangiovese. While Chianti Classico must be made from at least 80 percent Sangiovese grapes, the minimum is only 70 percent in Chianti. Also, Chianti Classico only allows red grapes but Chianti allows up to 10 percent white grape varieties.

One Of The Most Revered Appellations

Chianti Classico has the largest growing area out of all the subregions and, as such, is the easiest to find. Some people mistakenly believe that because it’s called “Classico” or classic, it’s better than the other types of Chianti. This is, however, not the case; it simply refers to the classic area where the first Chiantis were blended and made.

This logo comes from a story from the middle ages. Siena and Florence, always feuding, disagreed over the border of Chianti and, thus, which held more of this rich growing area. After years of fighting, they decided to solve the dispute peacefully.

Each city was given a rooster, and said that a rider from each town would depart at daybreak at each city’s rooster’s first crow. Then, wherever the riders met would be the division of the lands.

Leading up to the race, Florence starved their black rooster, only feeding it minimally at the first hint of sunlight. Siena’s white rooster instead was spoiled with food, the idea being a full rooster would crow earlier.

On the day of the race, Florence’s rider was woken at the first hint of light and set off, covering much ground, before the fat, well-fed rooster of Siena even bothered to wake. By the time Siena’s lazy rooster crowed, Florence had taken over most of the Chianti hills!

Chianti Rufina is Worth Exploring

If you’re looking to branch out from Chianti Classico, another respected subzone is Chianti Rufina. This small area to the northeast of Florence produces some of the most highly sought-after Chianti wines.

There are also some beautiful castles to visit, so it’s a great place to get off the beaten path of the usual Chianti excursion. If you want to make a day trip for wine tasting in Chianti, contact us, and we’ll help plan!

What about Riserva or Superiore?

To clarify, the use of “Riserva” or “Superiore” in labels tells you about how the wines are aged and not how “good” the wine is.

If you see a bottle with Riserva printed on the label, you already know it’s been aged longer than the average Chianti. Here are the most common aging requirements:

Describing this wine is no easy feat, as it varies from year to year and blend to blend. But, since Chianti must be made of at least 70% Sangiovese, and Sangiovese has specific characteristics, we can make some general assumptions.

Get To Know Sangiovese

Sangiovese is Italy’s most planted grape and is known for producing wines with medium alcohol, medium-high acidity, medium tannin, light to medium body, and a ruby color. But the way the grape tastes depends on where it’s grown.

It Has Red Fruit Flavors

Chianti is also often described as acidic, which makes it a great match for acidic meals like pasta al pomodoro. It also goes beautifully with the Tuscan standard, “bistecca,” because the fat makes the tannins less pronounced. 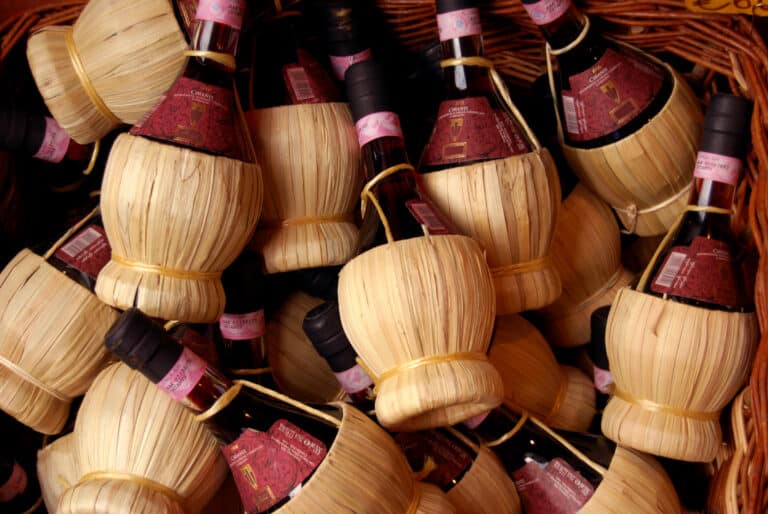 Bonus Tip: Why is Chianti Wrapped In Straw?

That straw-wrapped bottle you’ve seen at your local red sauce joint is a basic bottle of Chianti wine. As iconic as they are, these “fiaschi” were invented by accident.

These bottles get their name from the expression “fare fiasco” or to make a mistake in Italian. They were created after a production error resulted in some bottle bottoms not flattening when cooling. Instead of being thrown out, these mistakes were covered in raffia that gave them a wider base, allowing them to stand up.

Once producers realized there was the bonus of the straw protecting their precious wine in transport, the iconic bottle was born.

Chianti is a wine that some people say you must grow to appreciate unless you’re born in Italy. It may not be a wine that is immediately easy to drink, but it’s worth trying and tasting again and again.

If you want to bring a bit of Tuscany into your home, pair your next Italian meal with a glass. A few classic producers are Antinori, Badia A Coltibuono, Fontodi, Frescobaldi, and Quereciabella. And, per the great Eric Asimov, we recommend you serve it slightly chilled. Cin Cin!

Looking to travel to Tuscany for a Chianti wine tasting? Our travel planning services are here to help — head here to get started!

Rachel is an Arizona-born, wanderer at heart who eventually settled down to live the pasta-eating dream in Florence, Italy. Since 2014, she has been working as an Italian culture decoder, writing articles and consulting on all things Italian. When not exploring new restaurants or geeking out over art history, she can be found strolling the Arno river with her bilingual California rescue dog, Stella.
Posts By This Author →

Rachel is an Arizona-born, wanderer at heart who eventually settled down to live the pasta-eating dream in Florence, Italy. Since 2014, she has been working as an Italian culture decoder, writing articles and consulting on all things Italian. When not exploring new restaurants or geeking out over art history, she can be found strolling the Arno river with her bilingual California rescue dog, Stella.
View Posts By This Author → 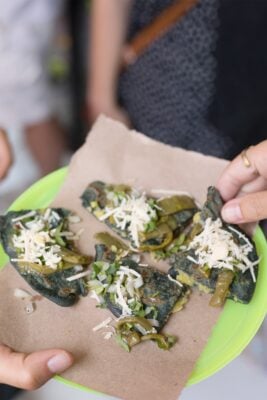 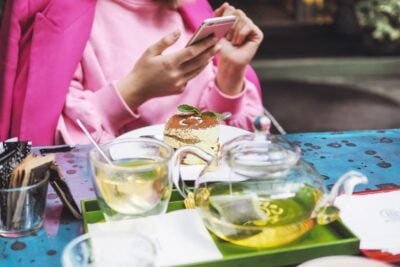 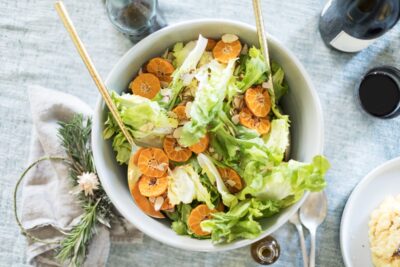 California
Fallbrook California, Is One of San Diego’s Most Charming Small Towns