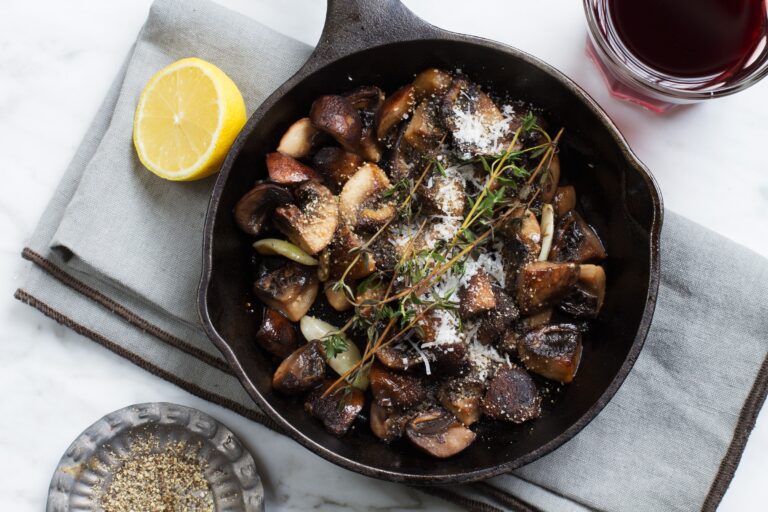 We all have those dishes: the simple ones that we started making on a whim but now turn to on the regular.

For me, this sautéed mushroom recipe is that. I started making it when I lived in Florence, and it has stuck with me because of how simple it is. I serve it alongside tagliata, with Sostanza Brown Butter Chicken, or tossed with a bit of mint and tagliatelle for a simple traditional Tuscan pasta.

A Bit About Italian Mushrooms

How You Pronounce Mushrooms In Italian: First off, let’s get on the same page. You’ll see mushrooms listed on a menu either by their proper name or generically as funghi (pronounced “foon-geeh” ).

There Is a Season For Mushrooms: Italians are very particular about following seasonality as with all things food. So, in any market, farm stand, or restaurant worth its weight, you will only find mushrooms on the menu in the late summer into fall when they’re available fresh. In towns where mushrooms are prized, you’ll often see people on the main piazzas selling their freshly-foraged mushrooms.

Porcinis Aren’t The Only Type You’ll See: The most common mushroom in Italy is the white button mushroom, which, in its larger form, is known as a portobello. These are commercially grown in the north of Italy and are often cooked with garlic and white wine. Oyster mushrooms and chanterelles are also found in northern Italy, and the region of Trentino prides itself on its many recipes using chanterelles.

Finally, the porcini is the king of mushrooms in central Italy as it grows extensively in the Apennine mountains, which run from Parma to Umbria. Be sure to check the origin of mushrooms to make sure they’re from Italy if you’re buying in the country.

Various Uses For Mushrooms In Italian Cooking: You’ll see mushrooms used a lot in recipes that are served in the Fall and from regions that are more about the land than the sea (think Umbria, Tuscany, the Alpine regions, and even the inland parts of Sicily). A few classic recipes that use mushrooms in Italian cooking are risotto, with polenta, marinated, sott’olio (aka preserved as part of an antipasto platter), tossed in scallopine, tossed with tagliatelle pasta, and as part of a Marsala sauce.

Not Quite Traditional: In Tuscany, mushrooms are often served as a side dish or contorno, and they’re usually sautéed with broth or white wine and served without any color. Alternatively, they’re sautéed with mint and added to pasta.

This recipe varies slightly from the classic side because we like our mushrooms to have a bit of color and char, which adds more flavor and texture to us.

Tips For Making This Side Dish

Use Any Type Of Mushroom: This recipe will work for most types of mushrooms you’ll encounter in an American or Italian market, be it button mushrooms, cremini, or porcini.

Clean The Mushrooms Well: There are myriad ways to clean mushrooms, but we like to use a damp kitchen towel and wipe off the mushroom caps. If you’re using a bigger mushroom with a more fibrous stem, you may want to trim the end or even peel the tougher part.

Don’t Move Them Too Much: The difference between great and not-so-great taste in mushrooms often comes down to technique. You want to cook them over medium-high heat and move them minimally so they can brown, which in turn maximizes flavor.

Add Some Wine If Desired: Many classic recipes for Tuscan-style mushrooms call for broth or wine to be added at the end of sautéeing to form a small sauce. If you want to do so, add enough of either to cover the bottom of the pan and stir to coat. Then cook it until it’s slightly reduced (there are still a few tablespoons in the pan), and the alcohol smell is cooked off if using the wine.

Make a Lot In The Oven: If you want to make a big batch of mushrooms, you can do so by roasting them in a single layer on a baking sheet. Follow the technique we use for this truffled mushroom pizza.

Don’t Use Pecorino Romano Cheese: FYI, we are not calling for Pecorino Romano cheese but rather for the more mild, less aged sheep’s milk cheese known simply as Pecorino. If you can’t find it, feel free to use Parmigiano-Reggiano.

Switch It Up: For a variation, add in red pepper flakes, fresh parsley, or even top it with pesto before serving.

Go stock up on all your cooking essentials, then head into the kitchen, make this, and share it with us by tagging @saltandwind and #swsociety on social!

This Pan Roasted Italian Mushrooms recipe is one of those dishes I started making when I lived in Florence and it has stuck with me because of how simple it is. I sometimes serve it with this Sostanza Brown Butter Chicken, or tossed with a bit of crème fraîche and noodles for a simple pasta.
No ratings yet
Print Recipe Pin Recipe
Prep Time 15 mins
Total Time 15 mins
Course Side
Cuisine American, Italian
Servings 2 Servings