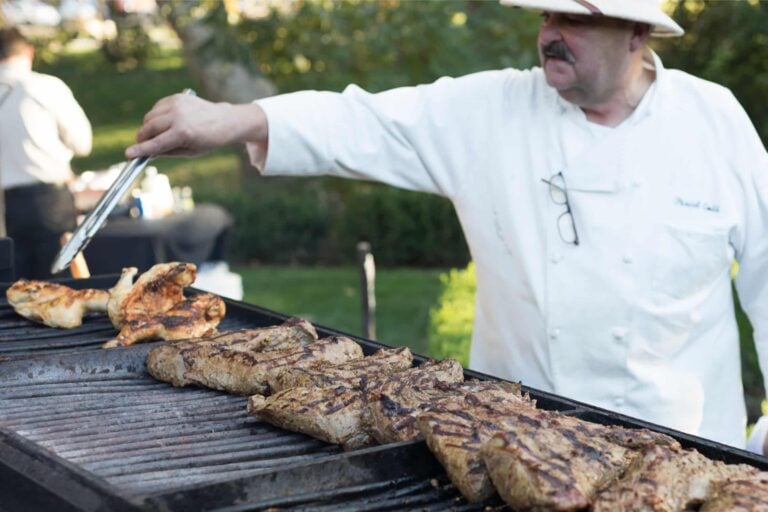 Consider yourself warned: if you head to California’s Central Coast, there is a 99.9% chance we will invite ourselves for some Santa Maria BBQ.

Yes, I adore the great towns (Santa Barbara! Los Alamos! Paso Robles!) or the world-class wine, but (mostly!) because of the Santa Maria-style tri-tip. This cut of meat hails from this stretch of the Golden State, and it’s the crown jewel in California’s native BBQ style known as Santa Maria BBQ.

We know, you think American BBQ, and you think of Texas, Georgia, and the Carolinas. But you do not think of California. And the truth is, this is more a style of wood-fire grilling than what we call barbecue.

But, semantics aside, it’s worth getting to know because, like the Golden State, Santa Maria barbecue is 100% original and so worth exploring.

Where Does Santa Maria BBQ Come From?

The epicenter of California BBQ is the Santa Maria Valley on California’s central coast, and any self-respecting meat-eater jumps at the chance to visit. So, when we were invited to Alisal Guest Ranch to spend our days making modern cowgirls, all while learning about Santa Maria BBQ,  we were very much game.

We lived the California ranch life for a few days, with daily horseback rides, wine tasting, and a crash course on Santa Maria BBQ.

Here’s what we learned: what makes Santa Maria BBQ unique, the key tips to make it yourself, and where to go for some Santa Maria tri-tip when you travel the California Central Coast. 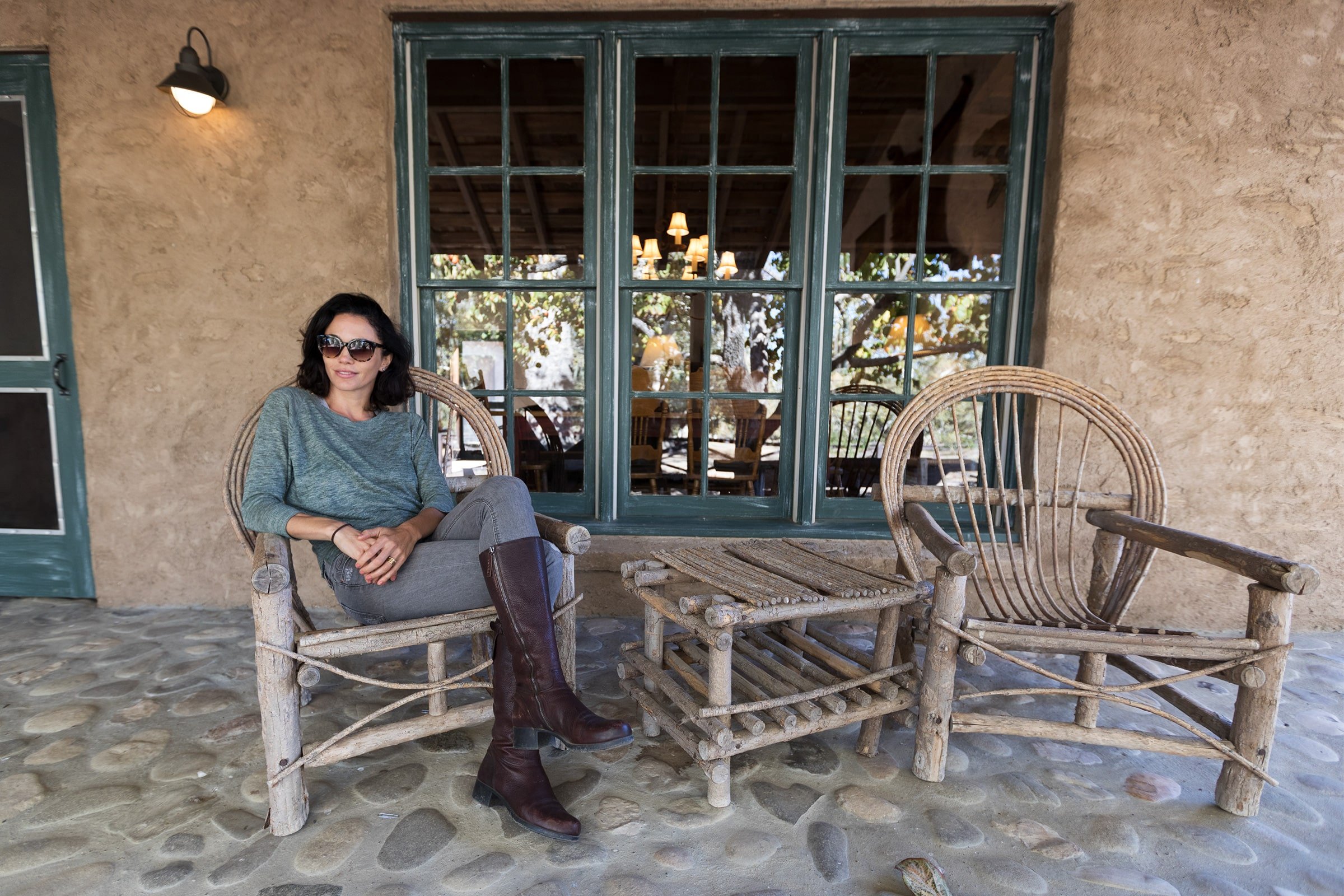 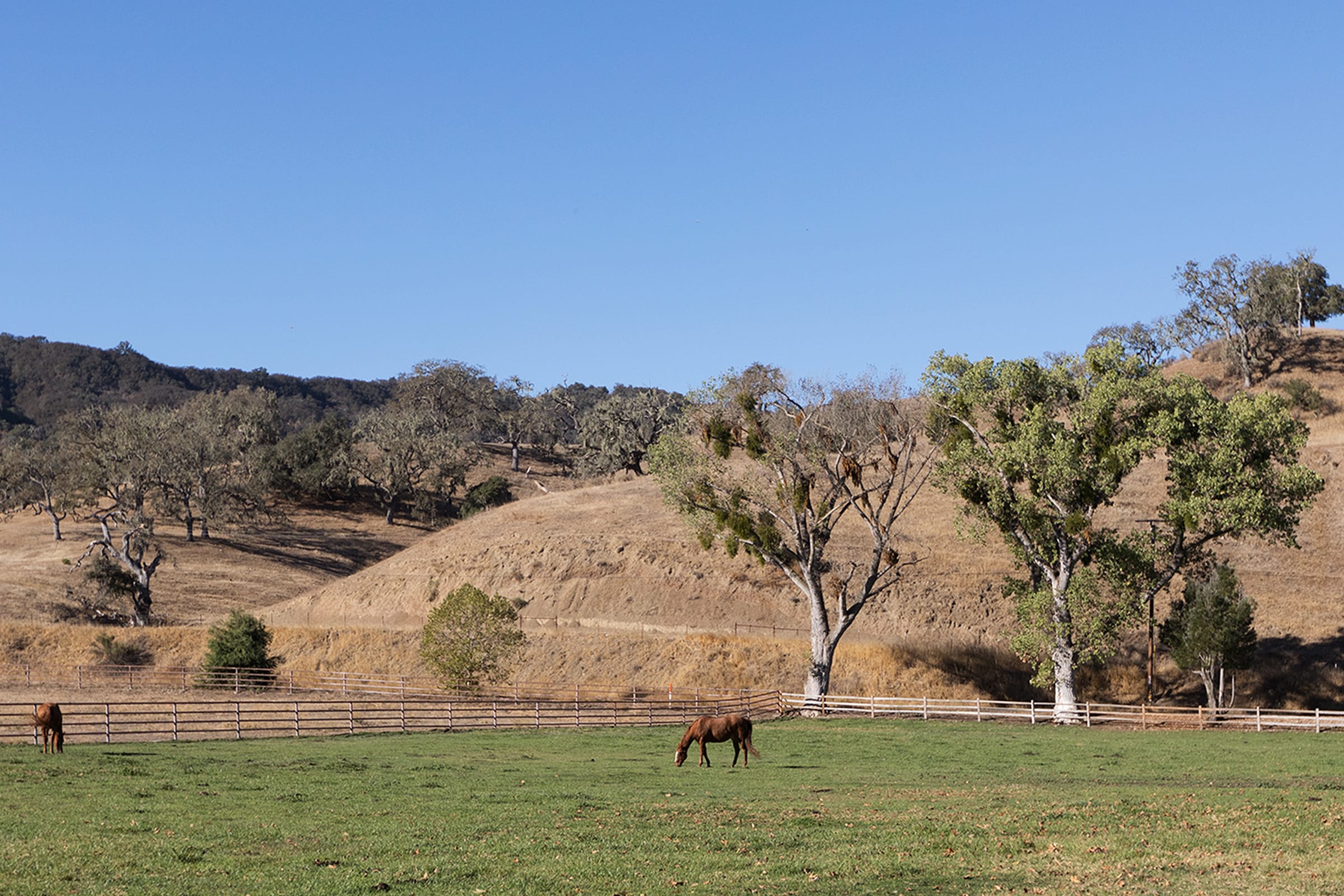 Santa Maria BBQ Has More Than A Century Of History

Santa Maria BBQ is a style of wood-fired grilling that dates back to the mid-1800s when the vaqueros (cowboys of Mexican origin) who ran the local cattle ranches would throw mega fiestas.

They’d dig massive pits to feed everyone, layer in coast live oak (aka “red oak”) and willow branches, and grill beef. It would always be served with chunky salsa and pinto-like pinquito beans, which are the de facto classic Santa Maria BBQ sides. This took place across the central coast’s Santa Maria Valley, and eventually, the BBQ style was named after the area.

Santa Maria BBQ Came In Its Own In The 1930s

Though the vaqueros get credit for kicking things off, the Santa Maria BBQ we see today was honed in the 1930s. The local Santa Maria Club would throw monthly barbecues, and the style was altered when they took it out of pits and instead strung it on rods and cooked it over the coals of locally-grown red oak.

It was so popular that a few local restaurants (including the original Hitching Post) were getting recognition by the mid-century. This culinary style became a part of California culture that President Reagan even threw a few Santa Maria BBQ parties at the White House. 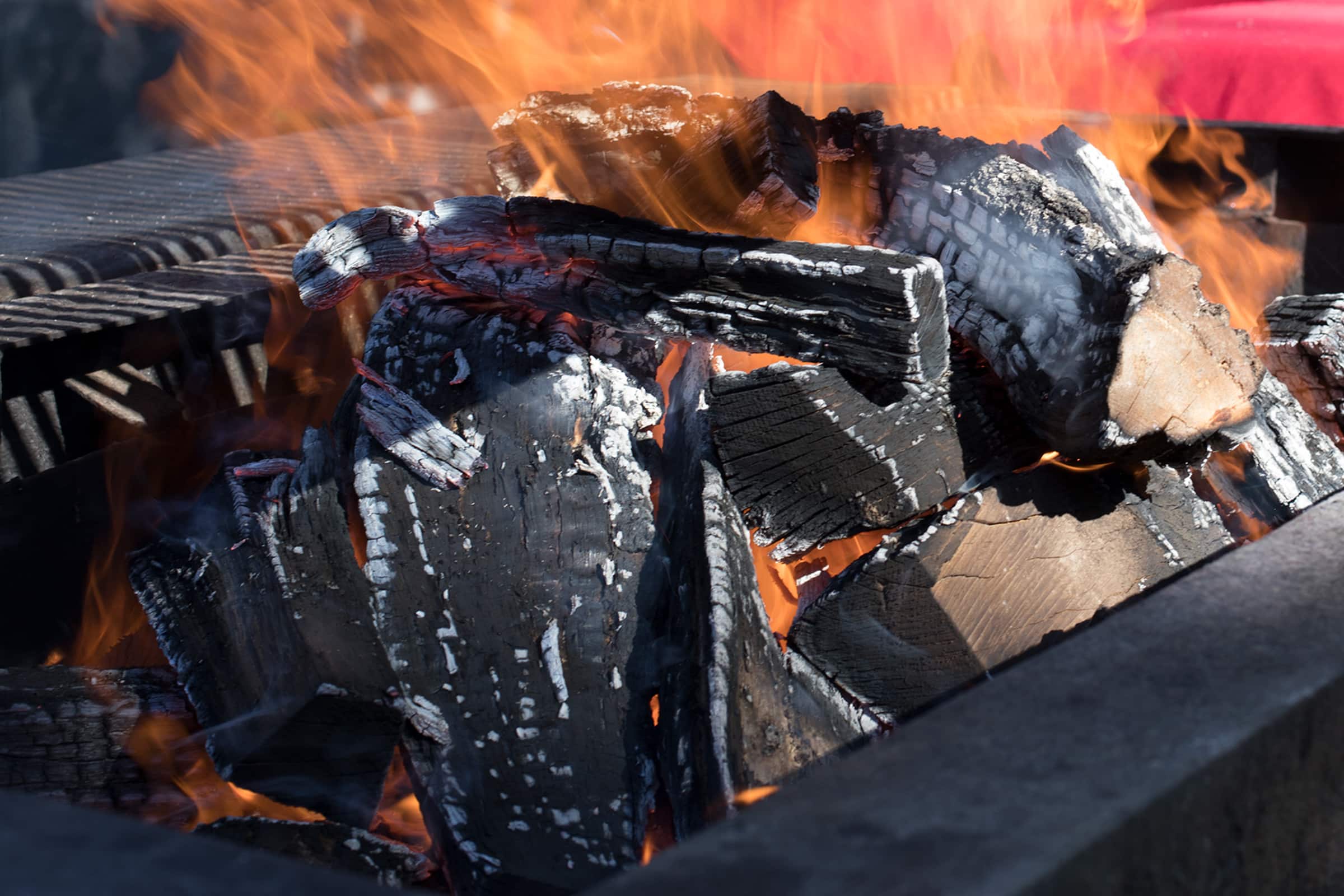 The Key To The Flavor Starts With “Red Oak”

California’s central coast has always had a ton of coast live oak (known as “red oak” locally), so some wise residents started using it for Santa Maria BBQ.

Thanks to the fact it’s technically an evergreen and has small leaves, “red oak” is the Goldilocks of wood for wood-fire grilling: it burns hot but not too fast and without too much smoke.

To reiterate: what we here in California call “red oak” is coast live oak, and it’s not the same as the red oak you find in other barbecue epicenters like Texas. 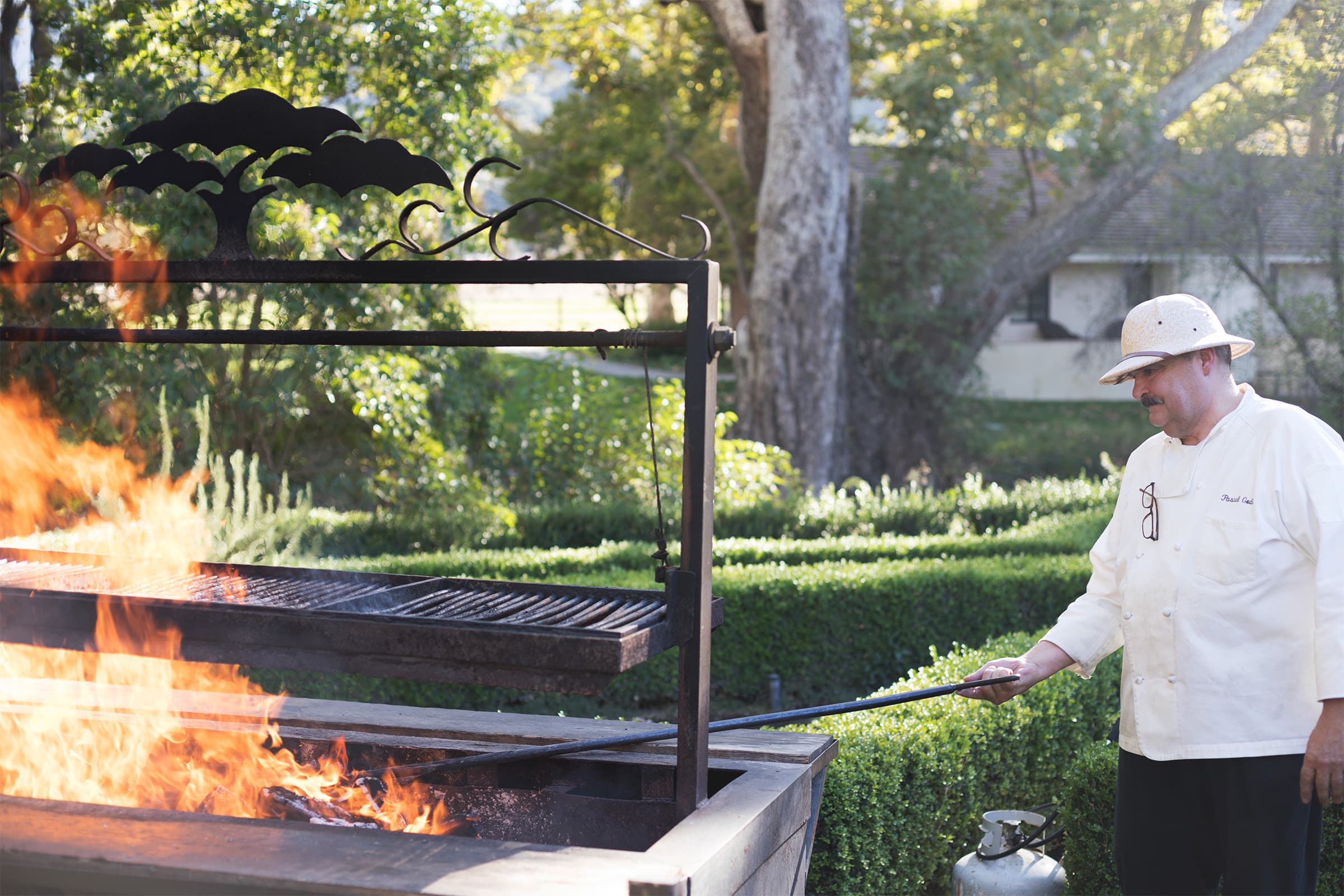 And The Namesake Santa Maria Grill

The traditional grill used for this barbecue style is the one you see here: a massive cast iron grill that’s been aptly coined a Santa Maria Grill. It gets loaded with “red oak” coals and then topped with a cast iron grate that gets lowered and raised as needed to adjust the cooking temperature.

You don’t have to have this grill to make a delicious Santa Maria-style BBQ, but it certainly helps. Oh, and because these grills are open pits, the meat has less smoke flavor than you’d taste in Texas but not quite all the char you’d get from a charcoal grill.

While most BBQ aficionados will proclaim that barbecue is all about “low and slow” (as in low heat and a slow, long cooking time), Santa Maria BBQ is the exact opposite. As opposed to Texas-style barbecue, this California style uses quick-cooking cuts (namely tri-tip) and grills them over a fire in a short amount of time. 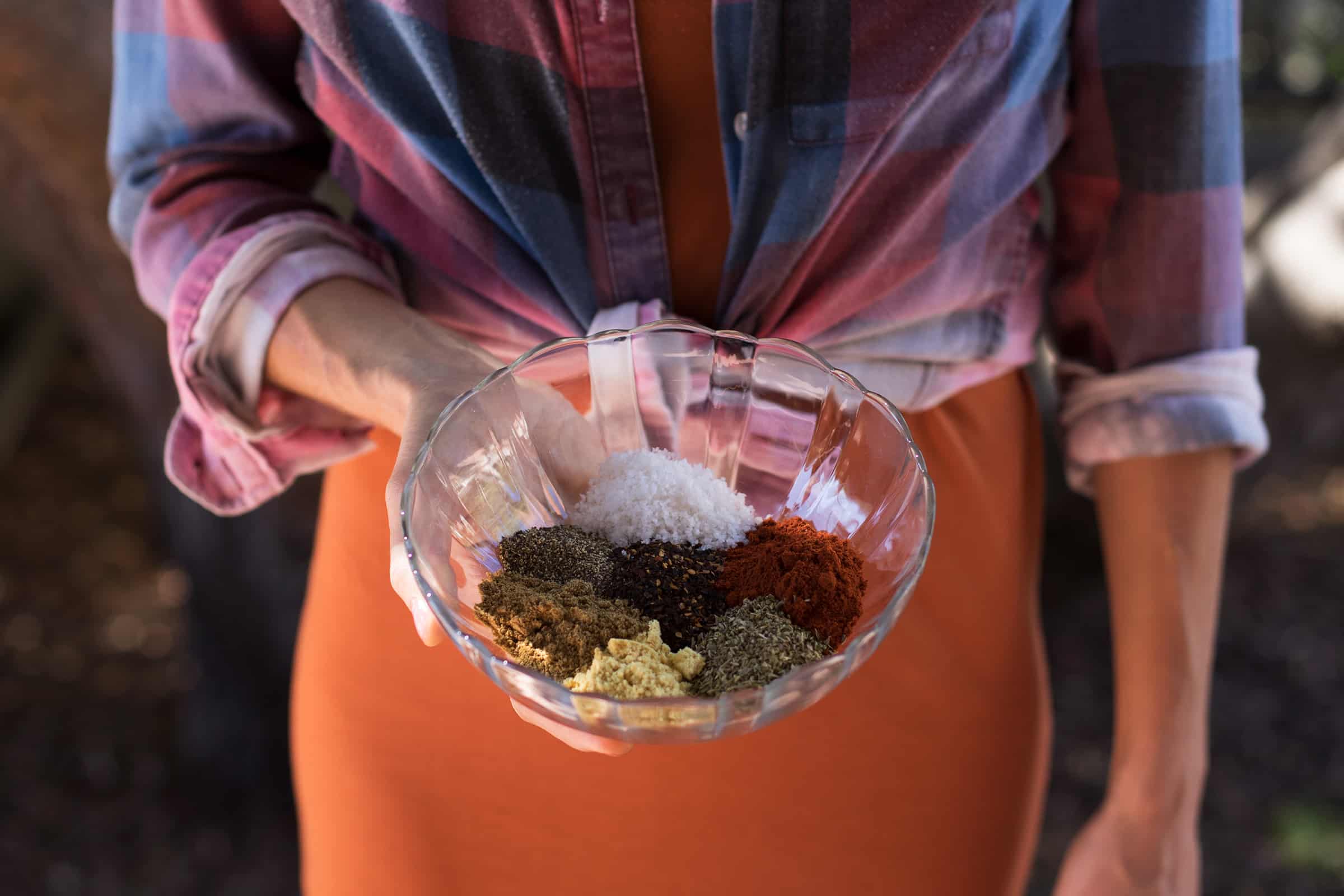 Simple Is Better When It Comes To The Spice Rub

Yes, a traditional spice rub is used for Santa Maria BBQ, and it’s so simple — just salt, black pepper, and garlic powder. This spice rub is usually applied by rolling the cut of meat in the rub so everything is well coated.

As such, the nuance in flavor is not determined by the ingredients but rather by the proportions. Frank Ostini, the fearless leader of the BBQ Bootcamp and chef and owner of the legendary tri-tip spot, the Hitching Post II, claims they use no less than 25% salt in their rub.

These days you’ll find two camps around the Santa Maria BBQ rub. The first is made up of spice purists who use nothing more than salt, pepper, and garlic powder, while the other group likes to put their own twists on it.

We like to nod to the region’s Spanish, Mexican, and ranching roots and add in dried chilis for spice, some paprika for smokiness, and some dried mustard. The rub we came up with during BBQ Bootcamp is this Ancho Chile Spice Rub, which is multipurpose for anything grilled, though we’re especially into it for meats. 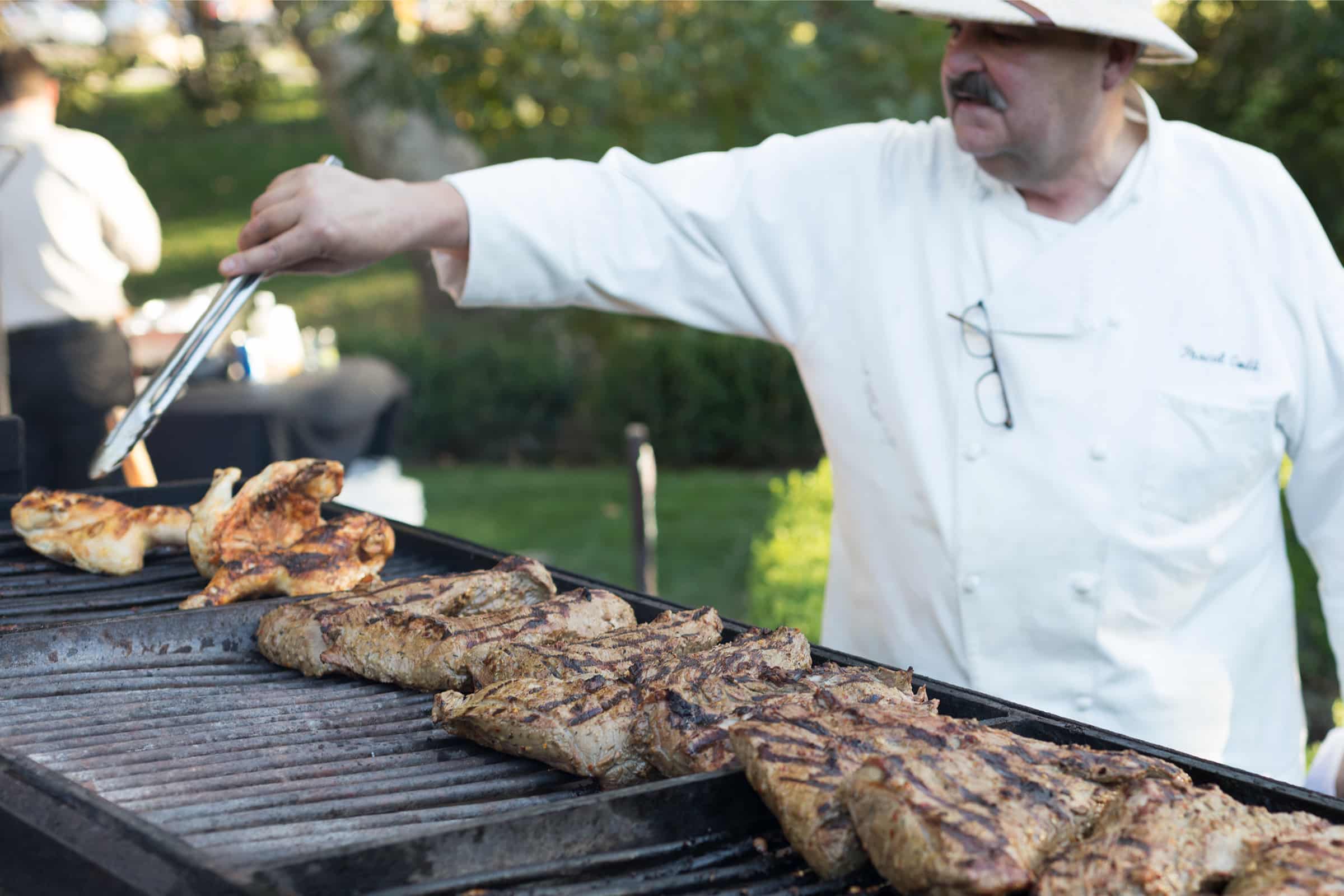 The Tri-Tip Cut Is In The Spotlight

The tri-tip is king when it comes to Santa Maria BBQ. We understand if you haven’t heard of tri-tip because it’s a cut you mostly find here in California.

Tri-tip is a triangular cut from the bottom sirloin, and it’s the go-to cut for Santa Maria BBQ. Like the cooking style, the cuts used for the Santa Maria style have evolved, and the tri-tip only dates back to the 1950s.

The cut is the brainchild of local butcher Bob Schultz who worked at the Santa Maria Safeway supermarket. It came about when Bob decided to rotisserie roast a hunk of the lower sirloin instead of grinding it up, and it was a hit.

These days a perfectly cooked tri-tip has been cooked for 30 to 40 minutes, should be charred on the outside, medium-rare rosy pink, and a perfect mix of tender and chewy. The key is for tri-tip not to get overpowered by any fussy marinades or fancy rubs but for the smokiness of the red oak and for its natural flavor to come through. 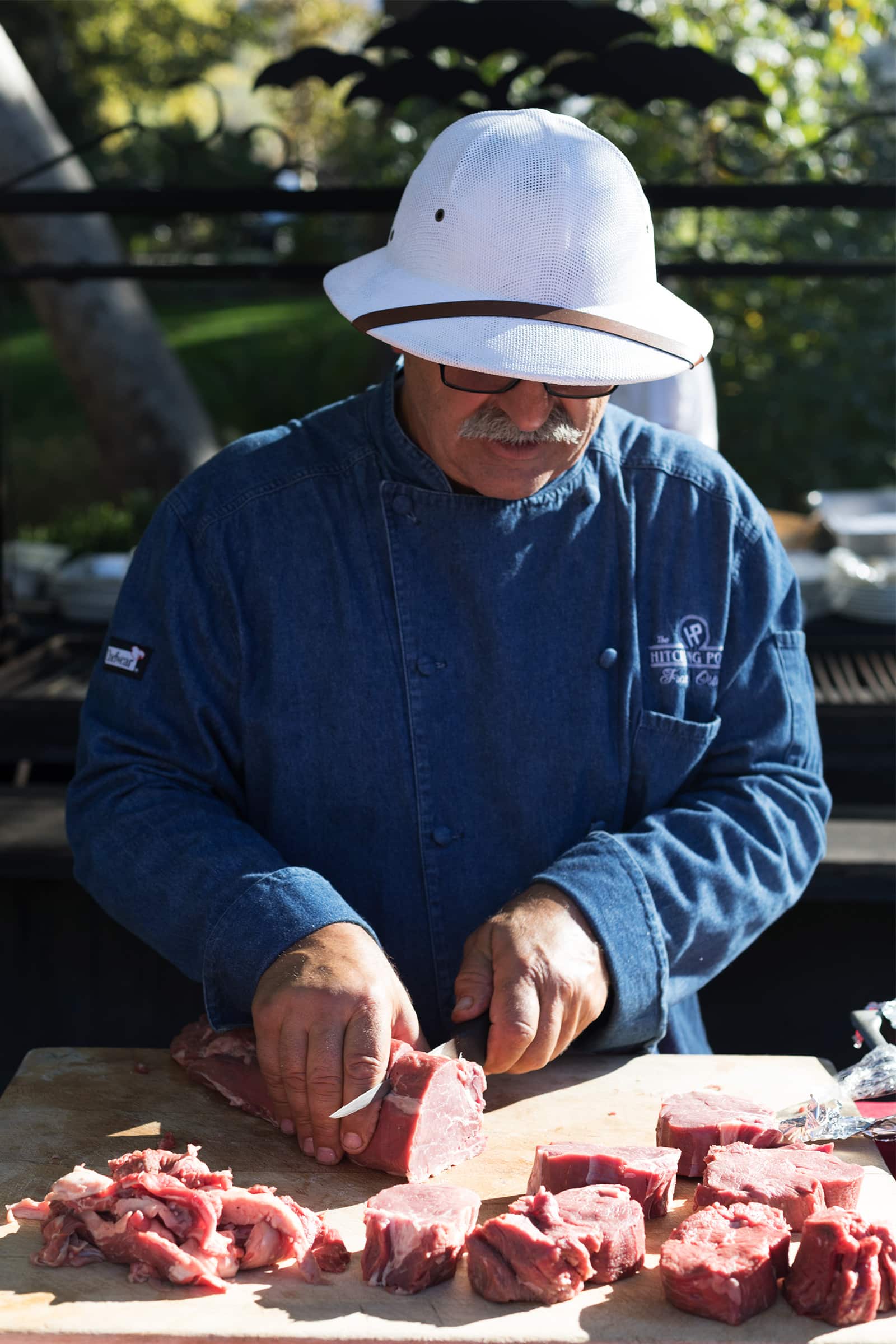 But They Don’t Just BBQ Tri-Tip

Though many associate Santa Maria barbecue with the tri-tip, it’s not the only beef in town. You’ll see everything from sausages to filet, rib eye, and chicken. But we’re partial to the tri-tip because it’s a cut with such local history and, frankly, incredibly tasty.

The Go-To Sauce Is Salsa Cruda

Another piece of tradition is to serve the grilled tri-tip with a side of salsa cruda. A barely spicy take on pico de gallo, it’s a salsa loaded with tomatoes, onions, chiles, and cilantro.

The Classic Santa Maria BBQ Side Is Pinquito Beans

Native to the Santa Maria Valley, pinquito beans are small, pink beans, and they’ve been the go-to site for Santa Maria BBQ for forever and a day. They’re like a smaller take on a pinto bean, and we wouldn’t think to have a local BBQ without them. 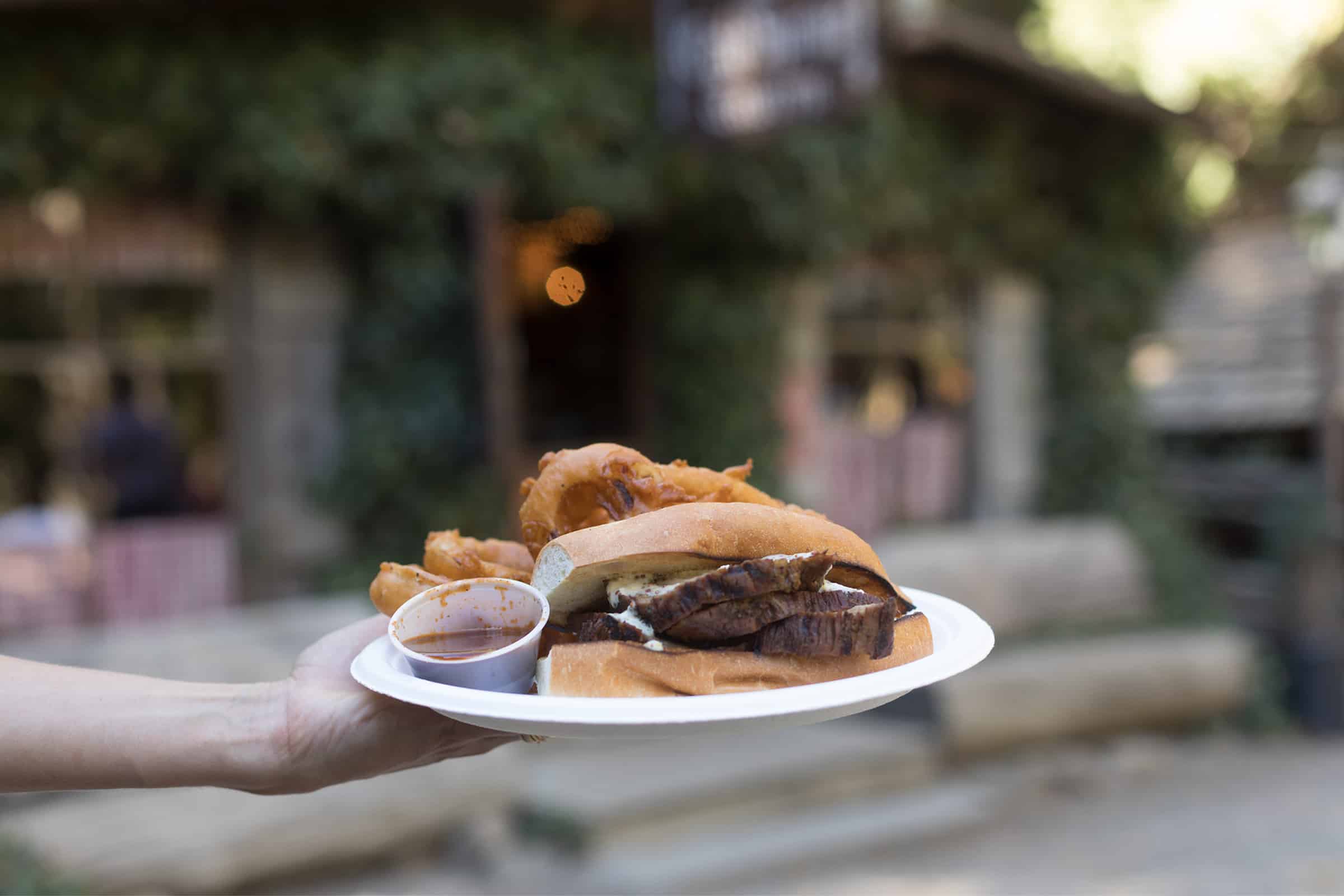 Almost everything about Santa Maria BBQ brings on lots and lots of opinions, but possibly nothing causes a bigger rift than where to go to get the best local BBQ. Some places serve a full BBQ plate, some are about a fine dining experience with a glass of local Pinot Noir, and others are about tri-tip.

If you’ve seen the movie Sideways (which you should if you haven’t), you also know the Hitching Post II from the film. This is Frank Ostini’s place in the same Frank taught me all I know at the BBQ Bootcamp at Alisal.

Also, this is the same Frank who owns the acclaimed Hitching Post Wines (We’re partial to their “Pinks” Dry Rose and their Santa Rita Hills Pinot Noir). This is your spot if you’re looking for a sit-down meal with some great local barbecue. While they don’t usually have tri-tip on the menu, they often cook it, so be sure to ask!

Even if you weren’t planning on stopping here for tri-tip, we’d tell you to go because they have a great selection of local beer, wine, and artisanal food. But we’re talking tri-tip so let’s concentrate! Los Olivos Grocery serves saucier tri-tip than Cold Spring Tavern (below), but it’s a perfect bet if you’re already stopping by.

Full disclosure: We’re partial to this place because Aida’s Aunt used to run it, so she grew up spending weekends at this old Stagecoach stop among ZZ Top-looking bikers while noshing on tri-tip sandwiches. Her Aunt no longer works there, but everything else is pretty much the same.

This sandwich is our favorite of all the tri-tip we’ve had in the valley. Smoky tri-tip is served on a crusty French roll, and you can have it with BBQ sauce, salsa cruda, or horseradish mustard sauce. Go on the weekend when they’re grilling tri-tip on a slew of grills, shop under a Live Oak tree, and enjoy one of their tri-tip sandwiches with any local beers or wines they serve.

Pin It for Later 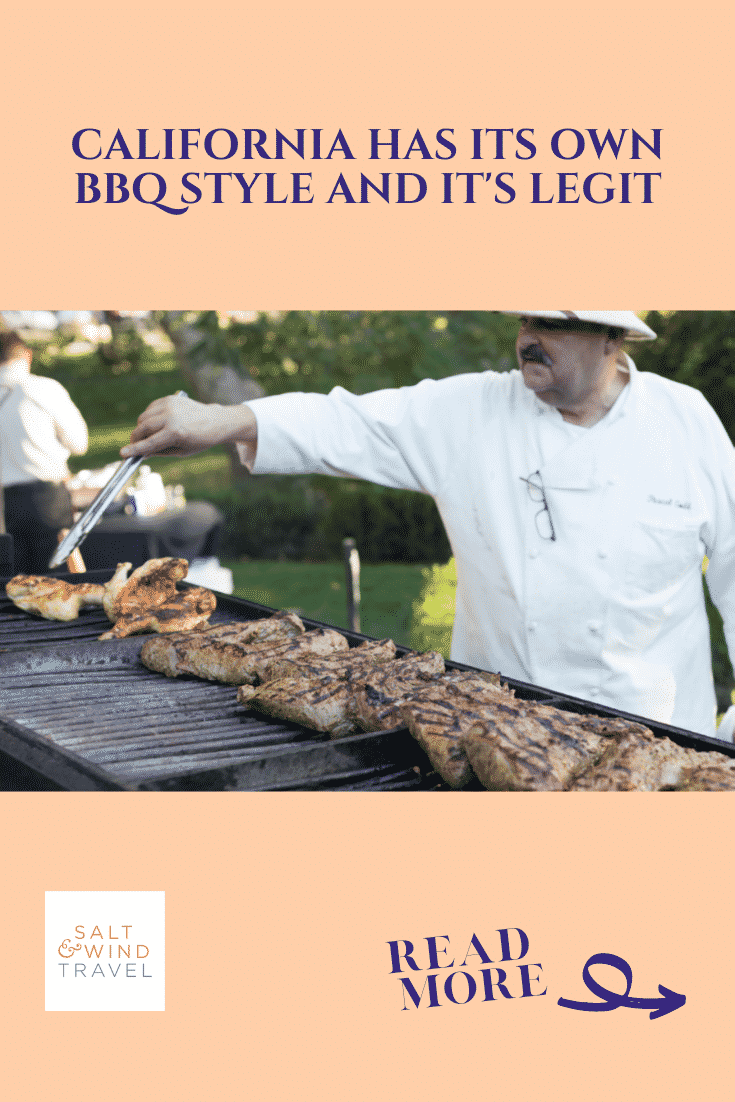 Sponsored Post: We were hosted at the BBQ Bootcamp by Alisal Guest Ranch, but all opinions are our own. Thanks for supporting these sponsors who help keep the site running. 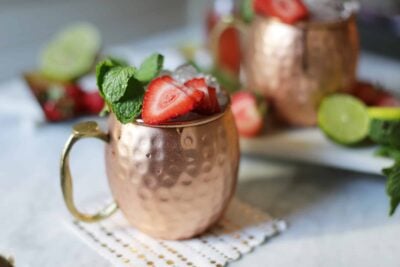 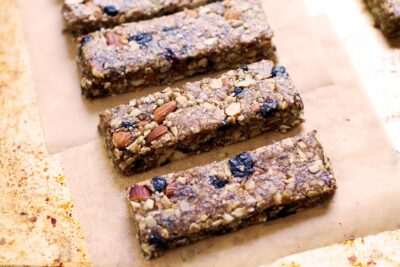 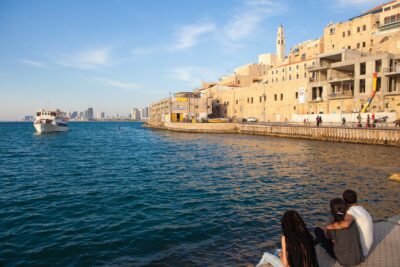 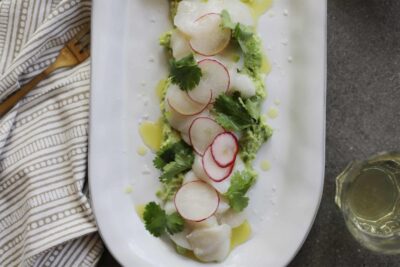