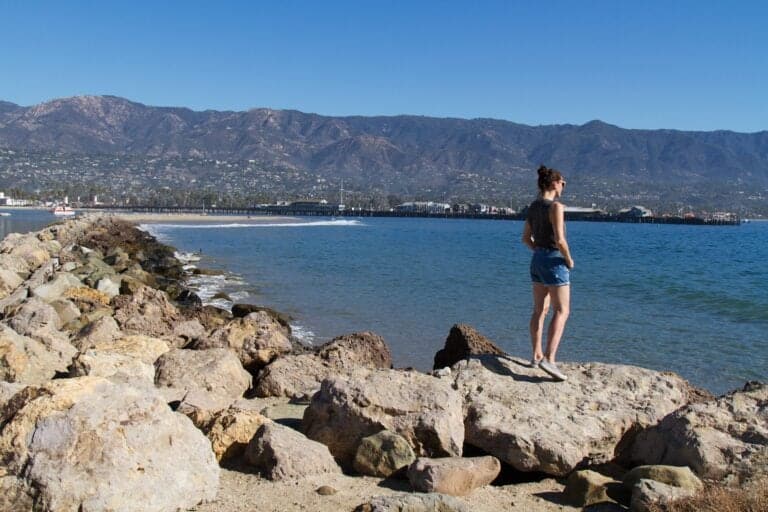 I’m pretty sure I got separated from Santa Barbara at birth.

It has everything I’ve always loved about my home state of California: laidback beach vibes, an active lifestyle, a love for the outdoors, quality people, and very manageable weather.

And, after having live in both San Francisco and Los Angeles, I can say it’s a perfect mix of north and south: chill enough that nothing’s ever taken too seriously but with an edge of European sophistication that you might not expect in Central California.

Get To Know The American Riviera

Speaking of Europe, Santa Barbara is nicknamed the “American Riviera,” but I don’t think I really appreciated just how much it’s like the French and Italian Rivieras until this latest trip. Countless times I’ve stopped over for a night passing through Santa Barbara as I trek up or down California Highway 1, but I’ve rarely just stayed put.

Recently, I spent a week there all in the name of searching out the best places to eat in Santa Barbara. Here the trip is condensed into a long weekend itinerary:

The key to road-tripping in California is making sure you hit the road outside of commuting hours. That said I left Los Angeles around midday and made it north in time for an afternoon hike.

One of the things I treasure most about the California coast is how many different hikes we have—be the seaside or back into a valley—but one I’m partial to in the Santa Barbara area is the Cold Springs hike.

If you hit it up when we’ve had some rain, there are a number of creeks and mini waterfalls. But, since we’ve been drought-stricken for going on 5 years, we didn’t get a peek of any water. Even so, the hike is worth it—a steep hike that rewards you with a panorama back on the city.

That night I headed to dinner at Sama Sama Kitchen— a place I’ve had on my Santa Barbara bucket list ever since they opened. If you’ve been to Santa Barbara in the past and only encountered fratty bars and mediocre tacos, then you should head to Sama Sama because it represents everything interesting in the city’s food scene right now—a celebration of local flavors with a creative global twist.

Oh, and Sama Sama gets bonus points for just a few steps away from the iconic McConnell’s ice cream shop (their Sea Salt Cream & Cookies is a must-try FYI).

The next morning we met up for breakfast (legit croissants from Renaud’s, merci beaucoup) and a boat ride around the harbor. To be honest, I wasn’t really sold on the idea of putting it around the harbor but I was totally pleasantly surprised.

After a jaunt up and down the coast courtesy of the Harbour Patrol—where I was versed in Santa Barbara history—we headed back to the harbor and over to Santa Barbara Fish Market to try some local fish.

Santa Barbara is known for having some of the best sea urchins in the state so I was dying to get my hands on some fresh uni. The fresh sea urchin is hand-harvested in the stretch between Santa Barbara and the Channel Islands so it’s super fresh. I had it prepared with soy, ponzu, and scallions, which, by the way, is a pretty phenomenal little appetizer.

I spent the rest of the morning in the water surfing and doing some stand-up paddling thanks to the folks at Santa Barbara Sail. Because it was a super quiet day on the water, I was able to head over to Sandspit wave and attempt to catch a few waves.

There are a lot of markets across the coast but the downtown Santa Barbara Farmers Market runs on Saturdays and Tuesdays and is very much worth it. There are all sorts of local vendors (love the local flowers, salad greens, and fruit!) and it’s the perfect place to pick up a snack.

This trip to Santa Barbara was the first time I got to head to the Funk Zone. To be honest, I was kind of skeptical of this area because, well, it has a cheesy name and because it has become soooooo popular in the last few years.

The Funk Zone is a former warehouse district (a stretch from the ocean to 101 Highway) where there’s now a whole neighborhood of wine tasting rooms and restaurants. We did an urban wine crawl with a lot of snacking—stopping everywhere from Santa Barbara Wine Collective to The Valley Project.

Speaking of wine tasting, I spent the majority of the next day in the nearby Santa Ynez Valley. Yes, this is the Central California wine area that was made famous by the cult film Sideways but there’s everything there from quality craft beer to some of the best BBQ you’ll find in California.

When I was little, my aunt actually owned the Cold Springs Tavern, a historic stagecoach stop-turned biker bar that, to this day, has my favorite tri-tip sandwich in the region. After driving around for a farm visit, and some wine and beer tastings at Figueroa Mountain, we had a mixology class and lunch at S.Y. Kitchen followed by some shopping (like at the adorable Los Olivos General Store).

After a few days on the go, I started the day off with a spa sesh (rough life, I know). I’m always game for some pampering but I was really excited about this because it was my first time at a salt spa. Salt Cave Santa Barbara has a full section of the spa made up of salt for all sorts of rejuvenating treatments from just meditating to some no-joke salt scrubs. After going the full nine, I was totally convinced that I should have salt scrubs on the regular. Think I can do a Kickstarter for that?

When I decided to do a week in Santa Barbara, one thing I absolutely had to do was go on a taco crawl. Santa Barbara locals have a lot of pride in their local taqueria scene and I hadn’t ever fully investigated.

Seeing that I’ve spent the last year getting a thorough taco educated thanks to Bill Esparza on our jaunts to Tijuana, I was a little skeptical. I mean, let’s be real, Santa Barbara is a rather posh city so it’s not really the first place you think of when it comes to serious tacos.

I brought along two friends and went for it, trying every taqueria I’d been recommended from State Street to Milpas and it was some serious work! After a major food coma and a ton of tacos, the winners were clear: my old standby, La Super Rica, was still as good as ever but I also joined team Lilly’s Taqueria where I had some adventurous tacos.

My last day in Santa Barbara I headed to starting at Butterfly Beach for sunrise then started the day off with a smoothie from Backyard Bowls.  I then set aside for a full-on beach day to get back in the water and enjoy the coast. Throughout the week, I stayed at the gorgeous Four Seasons and had a bike rental, which was pretty key.

Yes, I took Uber and drove around in my own car but being able to bike around the city helped me feel way more local and gave me a better idea of the city’s layout. And it was easy to get around because there are ton of cyclists on the road and a fair amount of bike paths so the residents are used to sharing the road. After a morning of biking around and some bodysurfing, we stocked up for a picnic spread at C’est Cheese then went to Ledbetter for a picnic and some last beach time.

Sponsored Post: My trip was sponsored by Visit Santa Barbara but all content, ideas, and words are my own. Thanks for supporting these sponsors who allow us to keep Salt & Wind Travel up and running.