24 Hour Itinerary: How To Hack Your Next Frankfurt Layover 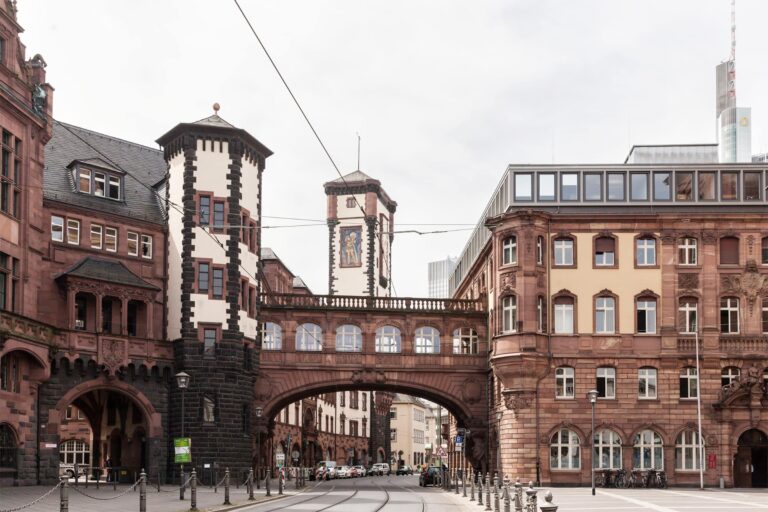 Travel enough and you’ll eventually experience this: the point where no amount of refreshing Google Flights will change the fact that the best option for your international flight is to change planes in Frankfurt, Germany.

As one of the world’s biggest hubs, millions of passengers pass through the Frankfurt Airport annually. Add to that the city’s reputation as continental Europe’s financial center — earning it the bleak nickname “Bankfurt” — and, well, it gets a bad rap as a boring city not worth your time.

The truth is, Frankfurt is a dynamic city with a heavily international population, a vibrant food culture and an easily navigable center. So, extend your next layover and squeeze a little Germany into the itinerary. Here’s how to dive into Frankfurt in just 24 hours:

How to Get Around

There are a number of ways to see Frankfurt and we recommend fitting in at least two. The city’s obvious draw is its river, the Main. There are a bevy of hour-long river cruises that take you up and down the river while serving drinks and offering generous views of rowers, the European Central Bank and Frankfurt’s main skyline, which is one of the only skylines in Europe.

Another way is the Ebbelwei Express, which is a kitschy tram that takes you around the city with Hessian music, pretzels, and the city’s specialty drink: apple wine, a still, tart wine made from pressed apples. Be sure to stop in an ebbelwei, or apple wine, tavern, which are traditional temples to the region’s signature sour tipple and not to be missed while passing through. While there, make sure you order some local specialties, like frankfurters (of course) and Grüne Soße, aka Green Sauce, which is a heavily herbed sauce that pairs perfectly with both apple wine and sausages.

Frankfurt is also perfect walking city: compact and easy to navigate. All things in the city orient around the downtown business district and the river Main, with no central neighborhood more than a 20 minute walk from any other. There is a tram and an underground S-Bahn, both of which quickly and efficiently move you around the city. If you’re short on time, these are good options, but we think Frankfurt is a city best explored by foot.

Start your day at the Kleinmarkthalle: Frankfurt’s indoor market. We won’t tell if you have sausage for breakfast–it’s practically required here (insider tip: hit up Frau Schreiber’s stand, she’s famous city-wide). Take in the city’s main historical attractions, many of which were rebuilt after being destroyed during World War II. The Römerberg in the Altstadt is the city’s old town hall and square and has been so meticulously reconstructed, you’d never know it wasn’t several hundred years old.

Nearby is the birthplace of the famous poet Johan Wolfgang von Goethe, whose birthplace has been turned into a museum. Since you’re just stopping through and won’t have time to check out the nearby wine producing regions, stop into one of the city’s wineries, like Weingut der Stadt Frankfurt. The winery’s grapes are grown just outside the city, in Hochheim, and you can sample fine examples of Riesling, Pinot Noir and a varietal that doesn’t make its way out of Germany, called Dornfelder.

After sampling some of the area’s wines, take a quick stroll across the many bridges near the Römerberg. This is the neighborhood of Sachsenhausen, which is home to many ebbelwei taverns, hip restaurants and independent boutiques. Unmissable is a stop at Markt im Hof, which is an indoor-outdoor food hall with a variety of artisan food products and home-cooked options from around the globe. From Syrian meatballs to Korean bibimbap, a stop here is the best way to get quickly acquainted with Frankfurt’s strongly international vibe (nearly 25% of the city are foreign nationals, FYI). Afterwards, spend some time meandering through the neighborhood’s charming streets, stopping into whatever storefront catches your attention.

Around around the corner, on the river’s edge, is Frankfurt’s Museum Row–a good option on any day, but especially if the weather isn’t particularly good. The innovative German Film Museum is a must for movie buffs and the world-class Städel is home to masterpieces by Rubens, Picasso, Botticelli and Rembrandt.

To end your day, cross back onto the north bank of the Main and pop into a local favorite for dinner, called Margarete, where you can dine on a regionally-inspired menu with updated German classics and international twists. The dining room is light, breezy and impossibly stylish while still being understated. Who said Frankfurt was boring?

The rumors are true: Germany’s public transportation system is fast, accurate, extensive and efficient. Simply follow the signs for the “Regionalbanhof,” where you’ll take one of the S-Bahn trains directly into Frankfurt’s center. The ride to the center is about 15 minutes and costs 4.50 Euro. Conversely, taking a cab will set you back 35 to 40 Euro and 25 to 30 minutes, depending on traffic. We say do as the Germans do and hop on the S-Bahn!

Thanks to its constant flow of business travelers, there are no shortage of reasonably priced, nice hotels in Frankfurt’s city center. Right off the Konstablerwache S-Bahn stop and within easy walking distance of both the business district, Frankfurt’s popular monuments and the various bridges to the other side of the River Main is the Westin Grand Frankfurt. With updated bathrooms, comfortable beds and helpful staff, you can’t go wrong with a quick stay here.

For those who want to up the style quotient, Villa Kennedy is your hotel. A couple of blocks off the south bank of the River Main in the trendy and upscale neighborhood of Sachsenhausen-nord, this boutique stunner named after President John F. Kennedy has an illustrious history as a home for a prominent banking family, a concert venue and an institute for biophysics.