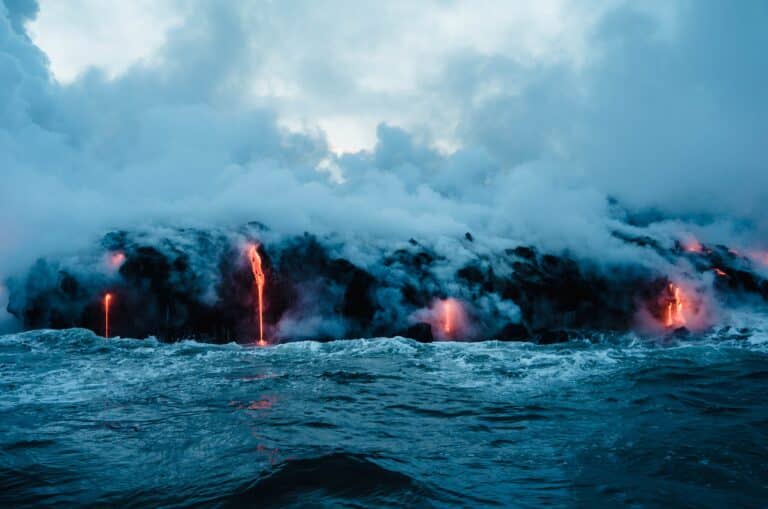 The Island of Hawai’i may be the largest Hawaiian island, but many don’t know its active volcanoes are proof it’s also the youngest inhabited island in the state. Hawai’i Island is the only place in the United States to see lava, thanks to the creation of Hawai’i Volcanoes National Park in 1916.

But you may not know that the Big Island of Hawai’i is teeming with lots of ways to experience the park’s 500-plus square miles (a park that is nearly as large as the island of O’ahu FYI) regardless of whether Mauna Loa (the world’s most active volcano) or Kīlauea volcanoes are active or not.

And because there are many factors to consider, from weather to what to pack and where to stay, we’re diving into all the must-need tips for Hawai’i Volcanoes National Park.

Where Is Hawai’i Volcanoes National Park?

Before we get into all the ways to immerse ourselves in Hawai’i Volcanoes National Park, the first thing to know is that the park is located in the Southeastern part of the Island of Hawai’i — aka the Big Island, aka Hawai’i Island. Getting there by car will take at least 45 minutes from Hilo and at least two hours from Kailua-Kona or Waikoloa.

The National Park Service (NPS) website and app outline all the logistical and practical essentials for visiting the park, including how to get there (a rental car is the most efficient move here), parking and entrance fee info, and updates on how and where to see lava during an eruption. They also have a Hawai’i Volcanoes National Park map. 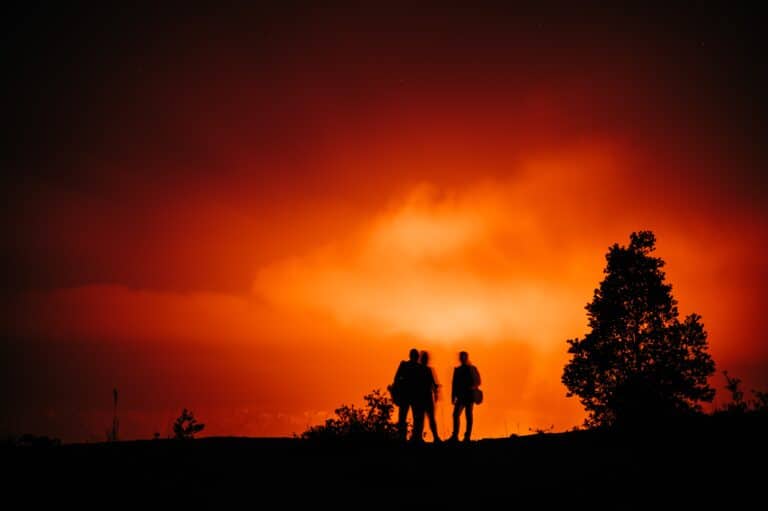 How And Where To See Lava In Hawaii

If you’re wondering if you can see active lava flow at Hawai’i Volcanoes National Park, the answer is yes—when the volcanoes erupt. On average, Hawai’i Volcanoes National Park gets more than 1,200,000 visitors yearly. But when the park’s active volcanoes, Kīlauea and Mauna Loa, are erupting—such as when both started erupting in a rare occurrence in November 2022—the park swells with even more visitors.

As such, expect the park’s viewpoints to get crowded, especially during popular times like sunset. Suppose you want to see lava on the Island of Hawai’i. In that case, the NPS recommends considering factors like hiking ability and any respiratory sensitivities (due to gasses and particulates) before zeroing in on a viewpoint of choice. Some viewpoints include:

The NPS website is also the best way to learn about roadways and viewpoint closures due to active volcanic activity. And within the park, the visitor’s center will have the most up-to-date info on lava flows, where to safely see the park’s best volcanic features and ocean views, and the best time for hiking its different trails. Park rangers are also great resources.

What To Pack And Hawaii Volcanoes National Park Weather

Although you can generally count on Hawai’i to be warm and sunny, the Hawai’i Volcanoes National Park area can be rainy and foggy in some parts, windy in others, and chilly in others due to Kīlauea’s 4,000-foot elevation. Depending on where you are in the park, you might experience the alpine tundra, barren desert, and lush rainforest.

On that note, plan to pack the following:

According to native Hawaiian beliefs, Kīlauea volcano is Pele’s (aka Pelehonuamea) home. As Hawaii’s temperamental fire and lava goddess, the superstition goes that it’s bad luck to take a rock or other natural items from the park (and generally, all of Hawai’i.) It’s also illegal, btw. Pele’s Curse is why many visitors to the Island of Hawai’i mail back thousands of rocks every year. 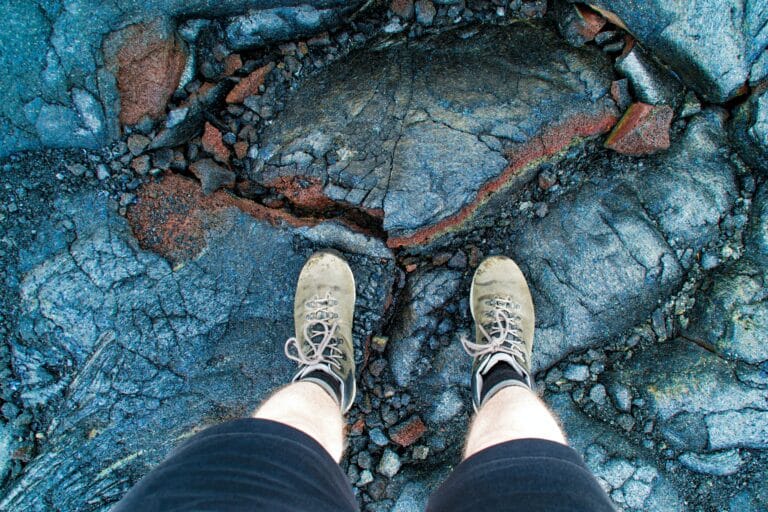 Hawaii Volcanoes National Park Hikes And More Things To Do

If you’ve checked off the lava ogling thing or find yourself on the Big Island during a dormant period (when the volcanoes aren’t erupting), there are many ways to experience the park.

Hiking trails like the coastal Pu’u Loa Petroglyph out-and-back trail take less than two hours to complete. The trail begins on uneven lava rock before transitioning into a boardwalk where you can view more than 23,000 petroglyphs carved into the rocks. Go after high noon as the sun casts shadows over the rocks and makes the ancient carvings stand out more clearly.

A longer hike is the Crater Rim Trail which traces a portion of the Kīlauea summit caldera. Several access points include lush rainforest, steam vents, and more.

Bike around paved areas of the park, including Crater Rim Drive and Chain of Craters Road. BYOB (bring your bike) or rent one for an independent or guided tour. Note that you’ll share the road with cars and buses.

It’s possible to get a good feel for Hawai’i Volcanoes National Park by car. Follow Crater Rim Drive and Chain of Craters Road and stop at points of interest like Haʻakulamanu (Sulphur Banks), where volcanic gasses and steam rise from the ground—and the unavoidable, super pungent but all-natural smell of those gasses.

Stargazing is a perk of the park—it’s open 24/7 and has low light pollution.

Where To Stay At Hawai’i Volcanoes National Park

As vast as Hawai’i Volcanoes National Park expands, Volcano House is the only available accommodation, with 33 rooms, 10 cabins, and a few campsites.

But outside the park in Volcano town, you’ll find several bed and breakfasts and some upscale boutique spots like Volcano Rainforest Retreat. Its cottages have floor-to-ceiling windows with full views of lush tree ferns and red ‘O’hia tree surroundings.

Further out, most visitors to the Big Island stay in westerly Kailua-Kona town and rainier Hilo on the island’s east side. If you need specific recommendations of where to stay near Hawai’i Volcanoes National Parks, reach out!

Where To Eat In And Near The Park

The park doesn’t offer much dining besides The Rim restaurant at Volcano House (the park’s only restaurant), so the nearest cluster of eateries is in Volcano town, located just outside the park entrance.

There find options for pizza, Thai food, sandwiches, and veggie-forward dishes such as from Cafe Ono.

All things considered, whether you’re visiting the Island of Hawai’i during an active volcano eruption, there are many ways to enjoy Hawaii Volcanoes National Park.

Heading to the Island of Hawai’i? Here are some must-reads:

Did you know we’re also a boutique travel agency specializing in Hawaii vacation planning? If you’re looking to plan a trip to Hawai’i, our Hawaii trip planner services are here to help you plan your perfect itinerary.

Photo Credit: Opening photo by Photo by Buzz Andersen on Unsplash; Photo of sunset by Heather Morse on Unsplash; person hiking on lava photo by Neil Bates on Unsplash 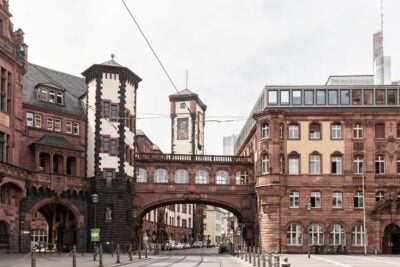 Itineraries
24 Hour Itinerary: How To Hack Your Next Frankfurt Layover 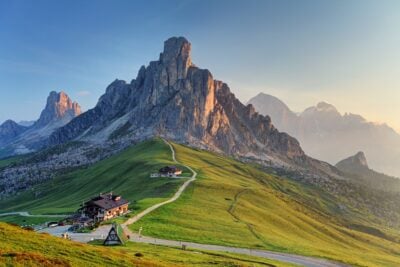 Destinations
Where to Travel in Italy Based on Your Personality 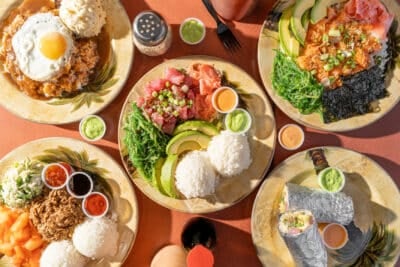 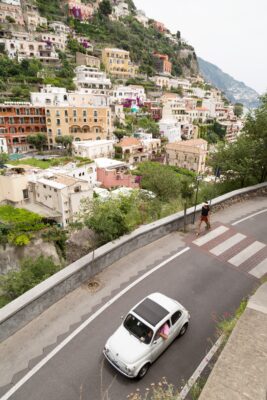 Destinations
What To Do When You Travel To Positano, Italy