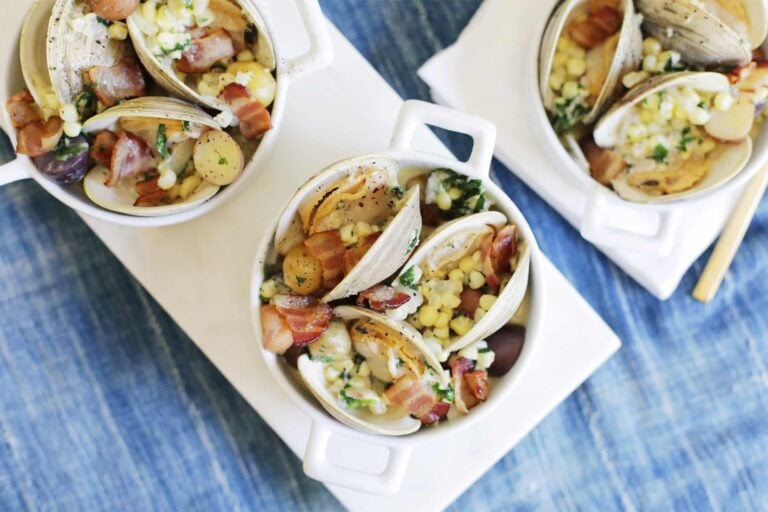 My husband was born in Boston and spent the first few years of his life eating all the regional specialties from Lobster Rolls to New England Clam Chowder on the regular.

So, when he moved to California, he had opinions about shellfish from when to eat it and how to eat it be it a basket of fried clam bellies or that famous chowder.

Nothing against New England Clam Chowder but I didn’t grow up in the crazy cold winters of New England, so I just don’t need the rib-sticking heaviness of classic clam chowder. The creative cook part of me has always wanted all the chowders — as in, corn, clam, and potato — at once. So I decided to do just that when I developed this Corn and Potato Chowder-ed Clams for our friends at California Grown.

My solution is this recipe that’s lighter and healthier and the key is a method I call “chowdering” clams. It’s a term I made up so it means nothing more than this definition that I just fabricated: verb, to cover a dish with chowder-like ingredients.

Okay, yes, you’re technically not making anything like a chowder but these Corn Chowder-ed Clams are like the California version of classic chowder! You make them by combining crisped bacon, a corn and cream reduction, a buttery base of sweet onions and potatoes, some minerally California white wine, and, of course, lots of clams.

The result is a twist on steamed clams with a sauce that tastes like all the best chowders combined. The only thing missing is a glass of chilled white wine to go with it! 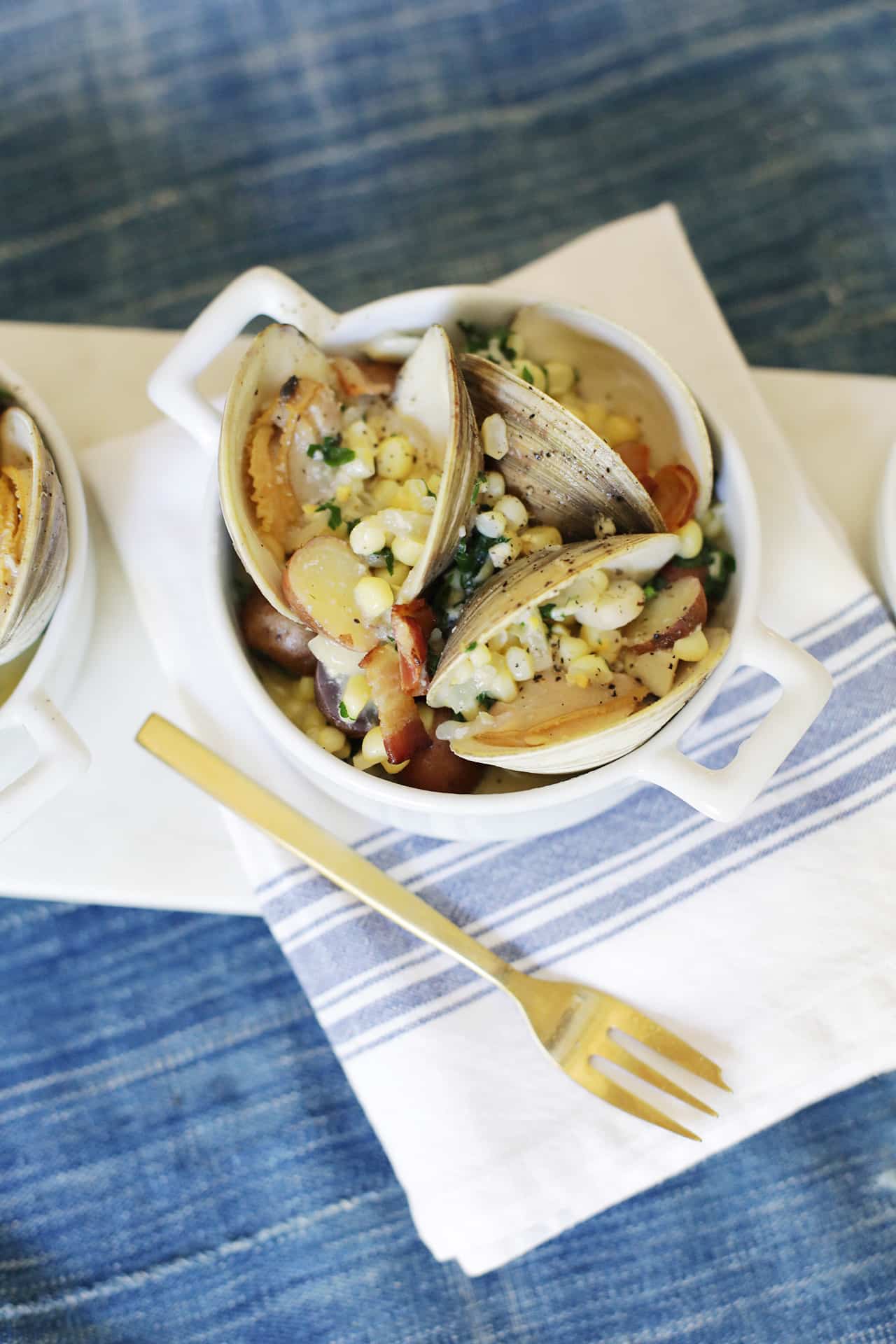 The Keys To This Recipe

Now let’s dive into the recipe itself! Essentially this recipe is an amped-up version of simple steam clams. In other words, the base technique is simply to saute a bunch of flavored goodies like butter, onions, garlic, and white wine, bring it all to a boil then add the clams and steam them until they all open.

But, if I had to pinpoint, I’d say the keys to this dish are the quality dairy, the seasonal produce, and, of course, the clams so let’s get into them all.

First the dairy: you want to use really great quality unsalted butter and the best heavy cream you can find because those couple of ingredients will add loads of flavor!

Here in California, we have access to a ton of quality dairy, and here’s a little more about it.

California leads the nation in sustainable dairy production and is number one in milk, ice cream, butter, nonfat dry milk and whey protein concentrate and is the second largest producer of cheese and yogurt!

As for the seasonal produce, well, you want in-season corn so that it’s extra sweet and delicious. Also, we love using the peewee potatoes in this recipe (aka marble potatoes) as they’re smaller than baby potatoes and they’re all over this time of year here in California. You could mix it up and add in other seasonal produce from kale or spinach in the winter to peas or asparagus in the Spring. To help you do just that, check out this list of what’s in season in California. 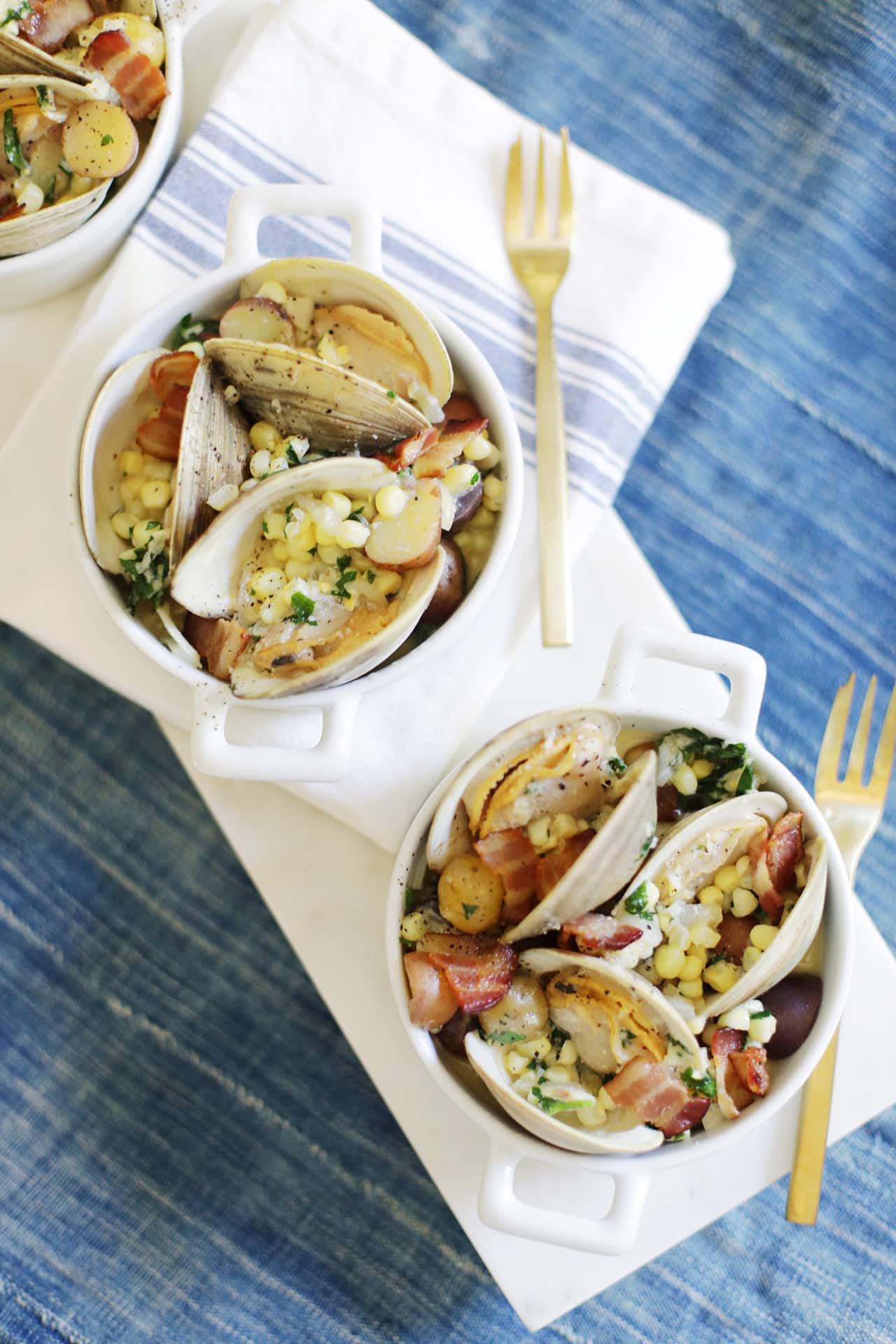 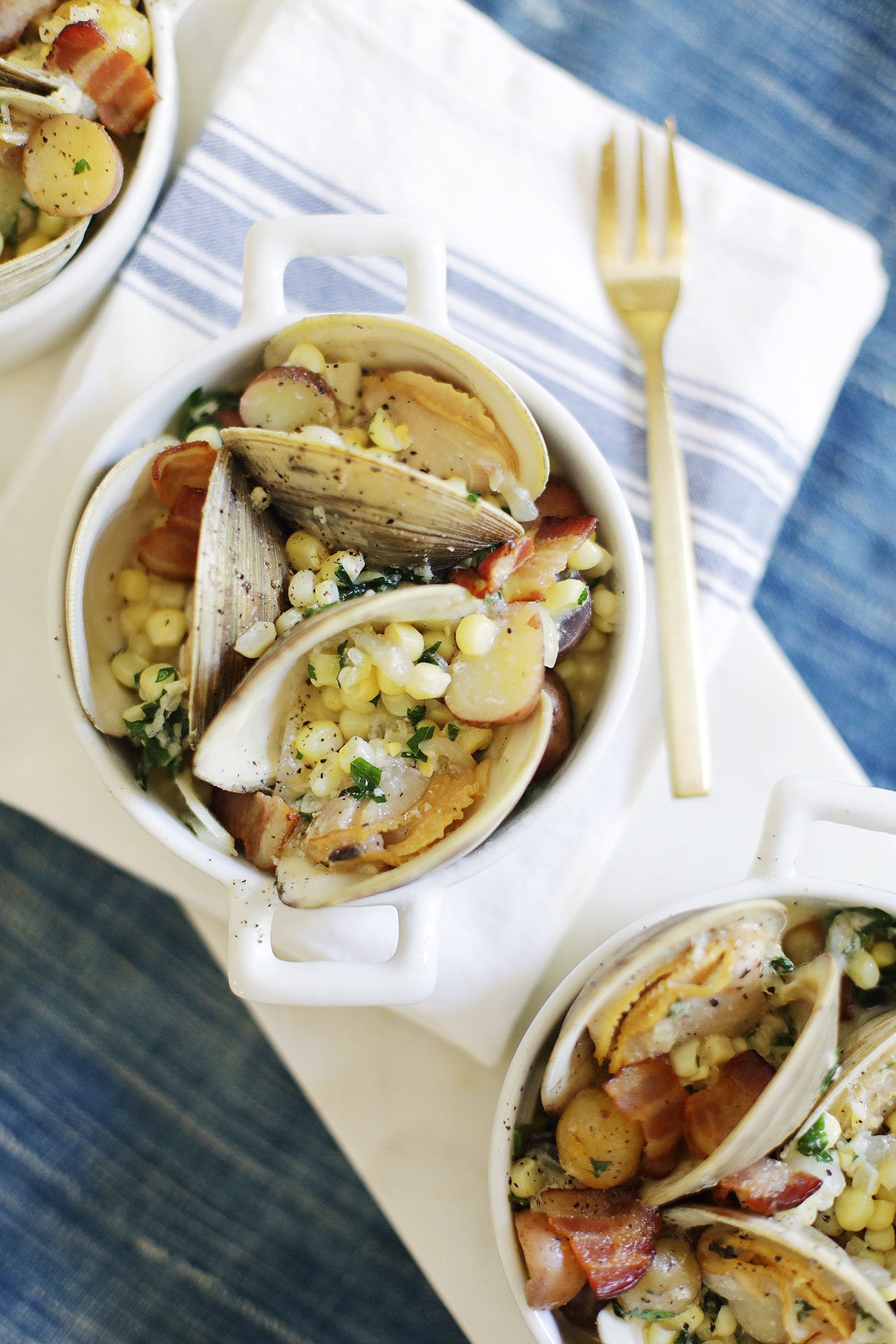 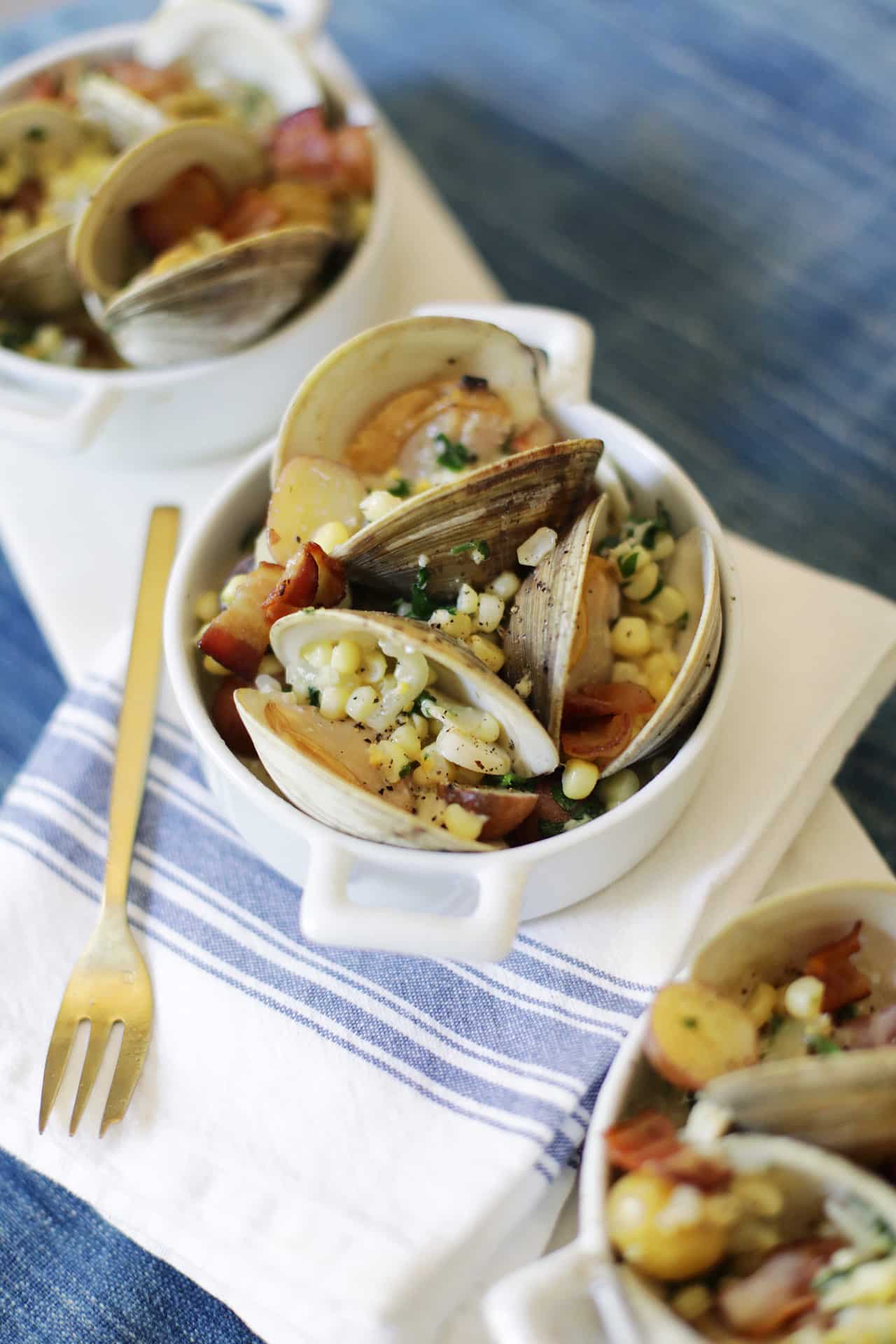 Make Almost All Of It Ahead Of Time!

There are a few steps to this dish but once you make it a few times, it will become second nature. Also, you can do quite a bit of the work ahead of time — the way we make it whenever we are cooking this recipe for company.

Things you can do ahead include soaking the clams, milking the corn, reducing the cream, crisping the bacon, and making the chowder base. Simply keep it all stored separately (i.e. the bacon, the cream, and the corn are all in a separate container) in the refrigerator until you’re ready to finish cooking the recipe. 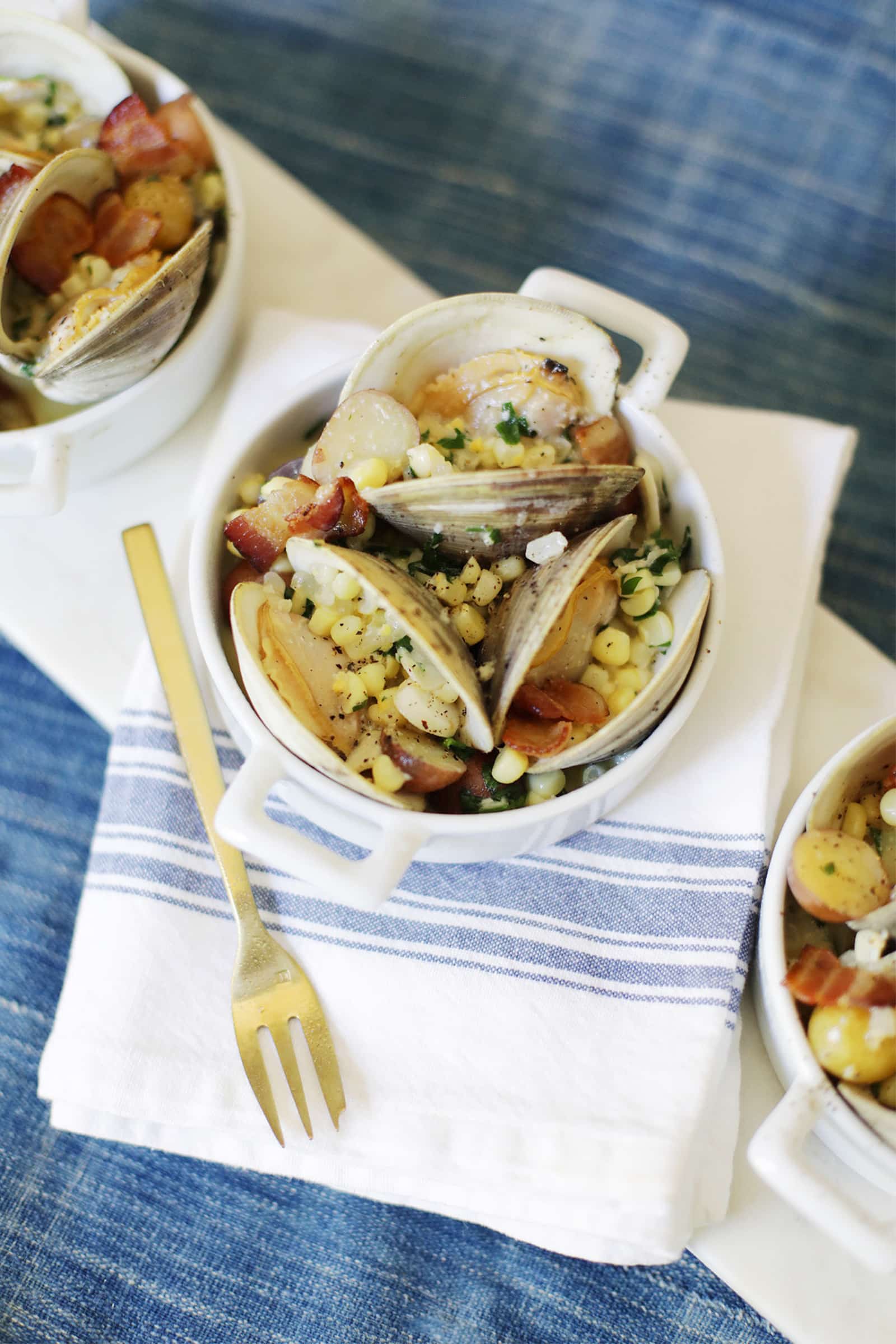 Be Sure To Save The Corn Cobs

In this recipe the corn is used in two ways: the cobs are “milked” so that the cobs and that “milk” add flavor to the sauce then the kernels are added to the final dish. You can make this with frozen or canned corn kernels in a pinch. However, opt for fresh corn on the cob when you can as it will help you get a lot of sweet corn flavor in the final dish.

Eating Shellfish In Month With The Letter “R”

My French stepmother lives by the rule that you should only eat shellfish — be it oysters or clams — during months that end in the letter “r.” There is and isn’t truth to this. Outside of this time of year, there is a risk of red algae blooms and it’s often when shellfish are reproducing and when they tend to not be as tasty.

Now that we have the majority of our shellfish commercially farmed, these issues are closely monitored and, in turn, you can generally eat shellfish throughout the year.

You really want to buy shellfish within about 12 to 18 hours of when you plan to serve and eat them (and don’t store them any more than 48 hours). As soon as you get home from the store, do these few steps:

How To Clean Clams

To make sure we’re on the same page, we’re using hard-shell (as opposed to soft-shelled clams like razor clams or steamers) clams in this recipe. As a general rule, hard shell clams don’t hold onto as much sand as the softer-shelled clams. And, since the majority of clams are farm-raised these days, they tend to be cleaner than in the past.

Even so, there are a few steps you want to take so you don’t have a gritty bite when you eat this dish:

What To Serve With Steamed Clams

A great steamed clams recipe doesn’t need much more than some crusty bread and a great glass of wine.

However, we also like serving it with a side salad and a classic dessert. ICYMI, we created this recipe as a part of a menu for our virtual #CookingClub so you can join us over there to cook this along with us! 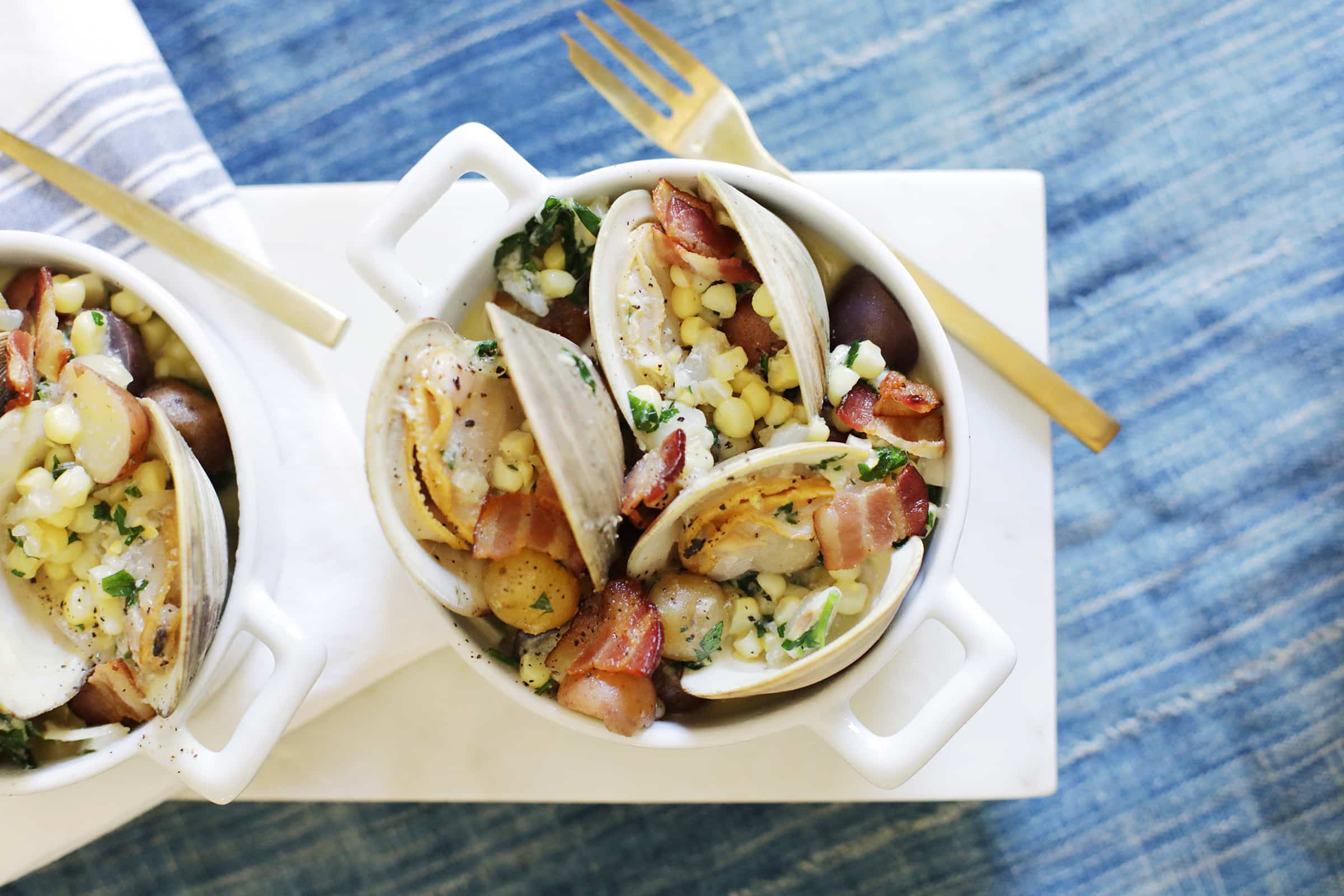 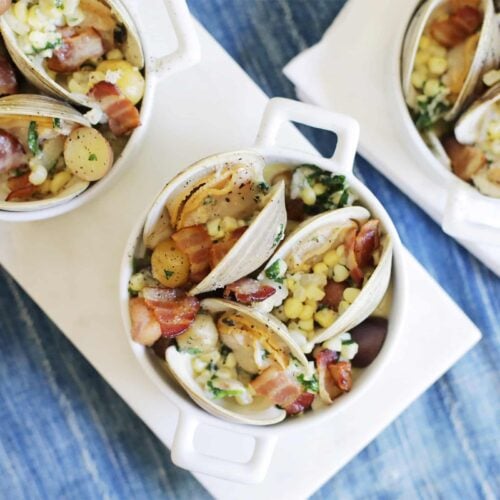 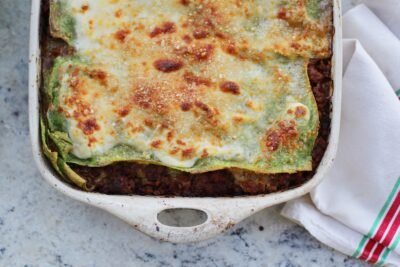 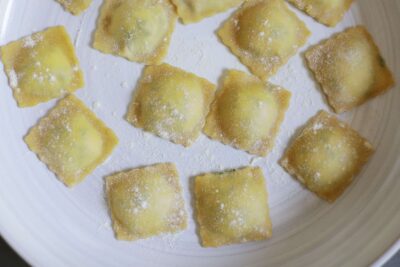 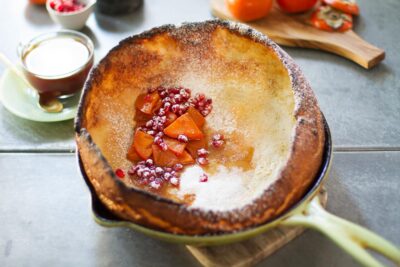 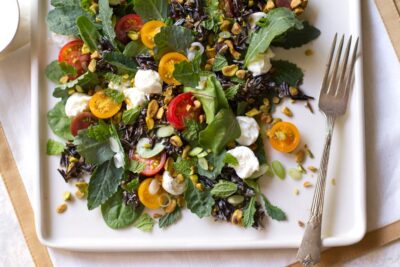