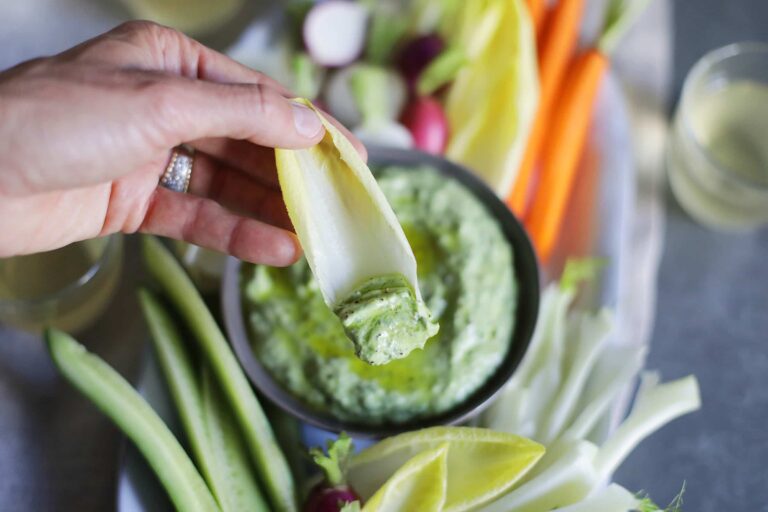 Let’s play some word association, shall we?

I’ll say “Green Goddess” and tell me what comes to mind. For anyone who lived in California between the 1960s and 1990s, it likely inspires visions of a hippie cafe that serves smashed avocado sandwiches on whole-grain bread with loads of sprouts and tons of Green Goddess Dressing.

Okay, that’s not the case for you? Maybe that’s just my first personal memory of the iconic dressing that is Green Goddess, but you catch my drift all the same.

Where Green Goddess Dressing Comes From

The thing is, Green Goddess is a classic California recipe, and it has a history that very much predates that memory. As in, the dressing dates back to the Palace Hotel in San Francisco in the 1920s.

The hotel claims to have come up with the dish as a nod to actor George Arliss who was in a production of the Green Goddess at the time. Unfortunately, the story of The Green Goddess has not aged well, but the silver lining is that this delicious recipe came out of it.

When you travel to San Francisco, you can dive into a lot of California food history like, say, sipping on Irish Coffees at The Buena Vista, digging into cioppino at the waterfront, or pulling up a chair at the foyer of the luxe Palace Hotel to try their Green Goddess.

Is the recipe they serve today the original that they served almost 100 years ago? Most likely not, but it is delicious.

What Is Green Goddess Dressing?

It’s believed that the original Green Goddess Dressing was a combination of finely chopped watercress, parsley, chervil, tarragon, scallions or chives, anchovies, and mayonnaise. To me, it’s a dressing that kind of sort of resembles the Caesar Salad dressing, in that it’s creamy, tangy, and a bit funky. And that’s not all the two recipes have in order — the 1920s is also when the salad was created though it was just south of the border down in Tijuana.

And actually, both recipes are what I would consider the North American equivalent of green sauce, as in that family of uncooked herb-based sauces that you find all over the globe like Italian salsa verde, Argentinian chimichurri, French sauce verte, and the German green sauce known as Grune Sosse.

Through the years, there have been all sorts of tweaks with many cooks removing the watercress, others ditching the anchovies, and still, others adding in a slew of herbs like Ina Garten’s addition of basil or Melissa Clark’s choice of dill.

Here, we’ve turned that iconic dressing into a dip with the help of some crème fraîche and avocados. There is also a bit of goat cheese should you want it a bit thicker and tangier, but that’s optional. The idea here is that you get a dip with a balance of creamy, herby, tangy, bright flavors that have a sunny disposition, just like California!

Variations On This Dip

By the way, a lot of this recipe is optional, and you can very much tweak it to your liking, as I explained when I cooked this recipe. If you can find chervil, by all means, add some. Or do as Ina and Melissa and pop in other herbs like basil, dill, or even mint.

If you want to make a vegan version of Green Goddess, go for it! Just remove all the dairy from this recipe and double the avocado. Of course, you’ll need to adjust the vinegar, salt, and pepper as needed to make the flavors pop. Oh, and if you want a dressing and not a dip, add water to the mix until it’s thin enough to coat a lettuce leaf but not so thin it falls off (and, yes, add more seasoning as needed).

Oh, and this dip can be made up to 24 hours ahead of time — just stir it and adjust the flavoring as needed before you serve it.

Now go stock up on all your cooking essentials, then head into the kitchen, make this, and share it with us by tagging @saltandwind and #swsociety on social!