A Brief History On Horchata 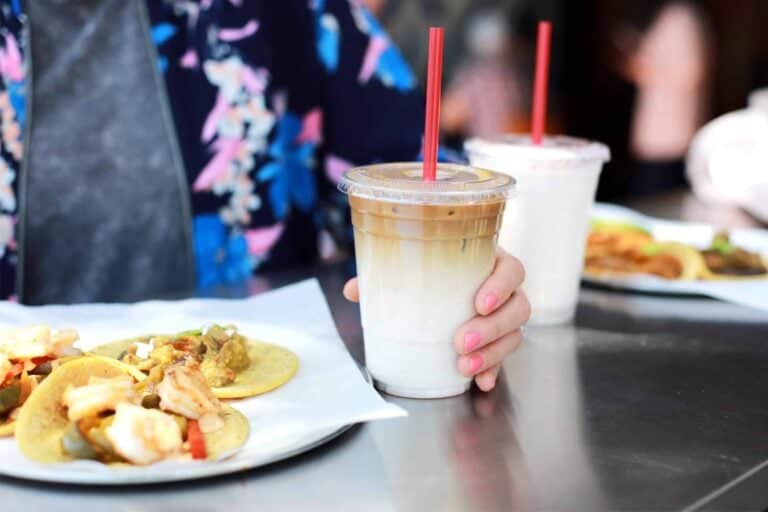 Picture this: you’re at your local taco stand and are about to dig into adobado tacos topped with a zinger of salsa.

One bite and your face is fire-engine red and your mouth burning hot. Our advice: gulp down an horchata pronto.

Mexican horchata is a chilled, milky, non-dairy rice or almond drink and its sweet, spiced flavor is the perfect antidote to a spicy salsa. In fact, horchata is such a staple at taco stands — usually in a glass barrel next to the agua frescas — that we can’t imagine Mexican food without it. Horchata is so standard at Mexican joints that it’s easy to assume the drink has Mexican roots.

Truth is there are two major kinds of horchata (Spanish and Mexican) and they’re as similar as they are different. As in both are cold, milky, sweet beverages but they’re made with different ingredients. On top of that horchata is trending here in Southern California so you can find all sorts of remixes that are a far cry from the classic recipes.

Confused yet? We thought you might be so we figured it high time to talk all things horchata. From the drink’s back story to how it’s made to the best places for horchata in Southern California, here’s everything you need to know:

The History Of Horchata

Though horchata is having a moment, the drink has some serious history as it’s said to date back as far as the 8th century. The earliest versions of horchata hail from Spain and the drink is still popular there today. (Side note: Orxateria Sirvent in Barcelona is one of our favorite artisanal horchata shops in Spain.)

Now that you know its history you’re probably wondering what’s in horchata. Known as orxata de xufa (horchata de chufa), traditional Spanish horchata is made from tiger nuts (aka chufas, which are more closely related to a potato than a nut).

During Egyptian times tiger nuts were used to make a milky drink but the Moors are credited with bringing the ingredient to Spain. Though the origin of horchata’s name isn’t entirely clear, King James of Aragon usually gets the credit. The story goes that after sipping a sweet, milky beverage in Valencia, he declared, “Açò és or, xata!” or ‘that’s gold!’

What you should know is the horchata that you’ll find throughout California is a New World variation on the classic Spanish recipe. The most common style of horchata in California is Mexican horchata, which is made by soaking and blending rice (instead of tiger nuts), water, sugar, and cinnamon.

And while the basic horchata recipe has largely remained unchanged, it does have some regionality. Horchata recipes throughout Latin America can call for the addition of nuts like almond or peanut, melon or sesame seeds, or an infusion of different spices.

Where To Get Horchata In Southern California

Here is where we head for quality Mexican horchata in Southern California:

Guisados authentic horchata recipe is so popular that it’s a standard on their menu. You can have it classic or with cold brew coffee added (we like it both ways) and it’s a perfect pairing to their spicier tacos like the chuleta en chile verde or the chiles toreados.

In Orange County, El Fortin makes theirs with a Oaxacan twist by topping it with bits of nuts, melon, and jackfruit.

Further south in San Diego, try Oscar’s Mexican Seafood’s horchata and strawberry water at their Pacific Beach location (by the way, we also believe they have some of the best fish tacos in San Diego).

Looking to mix it up? Here are three non-traditional ways to try horchata right here in Southern California:

Try A Caffeinated Twist On Horchata

Dress up your usual caffeine routine with Por Vida’s horchata latte in San Diego or Tierra Mia’s version in locations throughout Los Angeles.

For a jolt over ice, order a dirty horchata (a blend of house made horchata and dark roasted coffee) at Contra Coffee & Tea in Orange County.

Gracias Madre offers a horchata cocktail with thier plant-forward Mexican dishes. If you aren’t heading their soon, try our recipe for a Spiked Horchata Latte Cocktail that’s inspired by the West Hollywood restaurant.

If you prefer beer, hip North Park in San Diego has you covered. Stop in at Belching Beaver Brewery for a pour of their Horchata Imperial Stout.

End Your Meal With Horchata-Flavored Dessert

Lively Mexican restaurant Puesto – with a few locations each in San Diego and Orange County – offers a frozen horchata that you can boost with a bit of rum.

In Los Angeles, Tierra Mia also makes a tempting horchata cupcake, and if you make it to Supernatural Sandwiches in San Diego when their churro and horchata ice cream sandwich is available, in our opinion, don’t miss out.

How about you? Where have you found the best horchata?